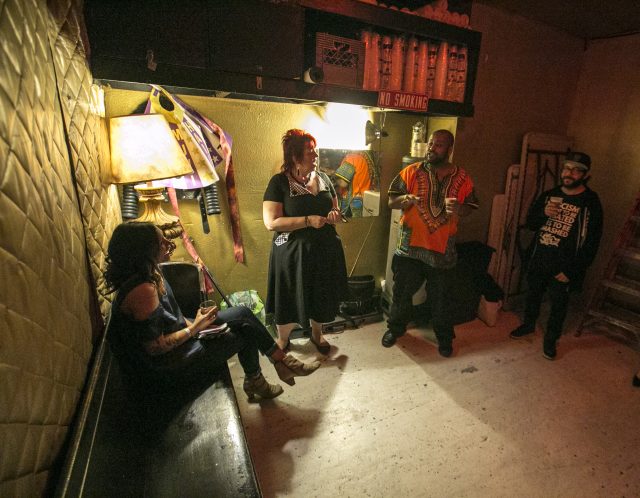 The room echoes with laughter, and it’s almost as if the temperature rises as the audience howls. Many share agreeable stares with neighboring show-goers in the midst of their chuckles and some raise their drinks toward Baruch Porras-Hernandez on stage.

They are everyday San Franciscans and Muni users that resonate with the cathartic transit-riding stories being shared with them at the 17th bi-annual Muni Diaries Live (MDL) show. To the right of the main bar, through the gate and up a flight of charcoal black stairs is The Elbo Room’s showroom, coated with scarlet red walls, adorned with chinese paper lanterns, equipped with a life-sized gold dragon on stage, and packed with up to one hundred and eighty guests in the Mission on Saturday, April 12.

What many don’t know is that Muni Diaries Live is a product of the evolution of a class assignment from San Francisco State’s journalism department.

In 2005, SFSU journalism majors Eugenia Chien and Jeff Hunt were tasked with creating a magazine for a San Francisco readership. Eugenia would take the long Muni ride from the Sunset to school daily, just as Jeff would from the Mission District. They found themselves often exchanging their own transit stories and realized how common it was to hear, “You won’t believe what happened on Muni.” Something other than the trolley wires sparked as they arrived to the niche of their magazine.

Twelve years later, this idea places them, and a whole community, in a dimly lit bar with some of San Francisco’s greatest storytellers paying homage to their similar experiences.

Chien and Hunt knew they had more than just an A assignment, but there was no fast pass to the success it has achieved today. They continued to collect Muni stories, but it wouldn’t be until 2008 when WordPress made its online debut, that they would launch the Muni Diaries site, giving the greater San Francisco population a chance to contribute, entertain, and learn about something going on in the city.

Shortly after, Tara Ramroop, who was already working in news journalism, joined co-founders Chien and Hunt as an editor. She was immediately drawn to Muni Diaries, she says, “It’s a shared experience just like riding Muni is a shared experience, whether we like it or not.”

The presence of Twitter quickly followed WordPress, and Hunt was prompt to sign them up despite Eugenia and Tara’s wavering belief in its future. Muni Diaries rose in a social networking epoch when hyperlocal wasn’t a thing, crowdsourcing was fairly new, and ideas of online community journalism, and using social media to promote something, were just as rare.

Ramroop went on to take a role in the company as event producer and emcee when Muni Diaries introduced a live storytelling event. Muni Diaries’ first live show, “Riders With Drinks” was introduced in mid-2009 at the Make-Out Room in The Mission. The site had been running for a year, and the group’s social media platforms were picking up traffic — it was time to experiment.

Eugenia, Jeff, and Tara were big fans the Porch Light reading series, and were motivated to produce their own live storytelling show incorporating a Muni storytelling theme.

Eugenia raises her hand before her eyes, as if to pull back a curtain and see it all over again, “I remember looking out at everyone who came for it and thinking, ‘I don’t know any of these people’.” Her face wholeheartedly lights up as she reminisces on the first Muni Diaries Live show.

Tara seems to capture the same image as her memory is triggered and excitedly adds on, “We looked out at the crowd and didn’t know anybody, it wasn’t people that felt compelled to go because they were our friends.” A shared grassroots appreciation is evident in the Muni Diaries team as they speak of the brand as if it were their baby.

Muni Diaries has since published over 3,500 stories through the lens of everyday San Franciscans and their experience on the mundane, yet much-loved public transit service, and welcomed more than 3,700 people to the Muni Diaries Live shows. The Make-Out Room was outgrown by the MDL’s increasing audience in 2011.

The growing turnout excites Ramroop. She explains the palpable satisfaction she gets from the audience’s vibe, “There’s something about being in a room full of people that are united for this common purpose and they’re all into it; the audience is something that is special to me.”

While the Muni Diaries team works diligently to filter stories and choose those that would not only be informational but celebratory, funny, cooky, or cringe-inducing— they accept story submissions from anyone interested in sharing their public transportation escapades. Submissions range from Muni and BART drivers, to journalists, comedians, and everyday people.

The Muni Diaries team prides themselves on being heartwarming and entertaining as well as being resourceful. One of Eugenia’s favorite stories is of Tammy, a Muni driver that lovingly threw her bus line a goodbye party on her last day as a driver – goody bags and decorations included – and was traced back to Muni Diaries by a German tourist who met her on the bus years later.

Tara says her favorite stories to share are those of a recurring ‘Muni Humper.’ After one story submission of a man inappropriately invading a woman’s personal space on the bus, other readers began to turn in sightings of the same pesky frotter. SFPD and the Muni Diaries team worked together, with the help of transit riders, and successfully caught the ‘Muni Humper.’  Recently, a new face took the name of ‘Muni Humper.’ This time, people knew to turn in tips right away and SFPD knew Muni Diaries was the source for their search, and made a faster arrest. Muni Diaries brings the community closer through their storytelling, but simultaneously promotes the safety of readers and riders alike.

The Muni Diaries team likes to lineup the MDL show with storytellers that can spin a yarn and engage the audience, and they always deliver. J. W. Friedman, founder of the podcast, “I Don’t Even Own a Television,” has the crowd visualize him without his bold black glasses, but with a cowboy hat like a Sons of Anarchy character, as we revisit his long bus ride with a drunken, foul-mouthed Muni hero. Dixie De La Tour, Bawdy Storytelling founder, stimulates the audience, not just with her Revlon fire red hair, but her sexual adventure on Muni’s 5-Fulton line.

Donning a traditional dashiki shirt, Na’amen Gobert Tilahun cautions the audience about the possible dangers on a wild, intoxicated, night-long trip after partying in the Castro. And Chronicle Reporter, Vivian Ho, tells of a Muni love story, not the fairytale kind, but one involving bodily fluids no one wants to sit in. The performers of the show bring different backgrounds, personalities, and storytelling styles to the stage that keep the Muni Diaries fans erupting with laughter throughout the whole show.

Irene Tu, comedian and writer, performed in this year’s first MDL show, sharing a piece of her experience being a Muni celebrity last year. The audience’s faces turn red with amusement as she shares her struggle to replicate her picture on the bus using her friends as paparazzi throughout a mixup of Muni line schedules. Tu hopes to see Muni Diaries put on more shows throughout the year because, “It really brings a sense of community, and you often don’t talk to random strangers and get to hear their stories, but this show really kind of connects everyone together.”

That night, Tu also got a chance to battle the host of Queer Open Mic, Baruch Porras-Hernandez, in the MDL Haiku Battle, inspired by Muni Diaries’ sensei, Tourettes Without Regrets.

The Haiku battle consists of Baruch and Irene at war. Their weapons? Sarcastically sweet and tastefully invective 5-7-5 exchanges, leaving the audience hooting in laughter, some even involuntarily slapping their knees. The crowd casts their vote after each of the three rounds, leaving Porras-Hernandez a second time MDL Haiku Battle champion.

Looking like the superman of poetry, backstage in a gold upholstered room, Baruch proudly sports his wearable trophies, an orange head sweatband and purple and gold cape that read Muni Haiku. He shares that performing in MDL was one of his goals in the beginning of his career as an artist and storyteller, and that it makes him more proud to be a San Franciscan.
“I love that when you’re riding Muni, you’re going to have these little moments of people’s transit stories in your head, and it’s going to stay with you forever.”
He says, “There’s those things that happen when you become a real San Franciscan, and everybody has different standards of what that is, but I feel like it’s when you have your first good and bad muni experience that makes you a true San Franciscan. Muni Diaries took something that everyone complains about, but gives us all something to laugh about and listen to.”

The Muni Diaries team continues to find ways to bring the live storytelling experience to San Francisco. Their latest addition is the “MuniDiaries” podcast, releasing new shows every Tuesday and giving storytellers a chance to share their vibrant transit experiences, and giving listeners who missed the MDL show a chance to inhabit their adventures at any time.

“I love that when you’re riding Muni, you’re going to have these little moments of people’s transit stories in your head, and it’s going to stay with you forever.” Dixie looks up to the ceiling as though imagining herself on the bus thinking back to the night’s performances, “You can’t ride the bus the rest of your life without thinking of Irene, and Baruch, and Na’amen and the rest of these people without thinking about their stories.”