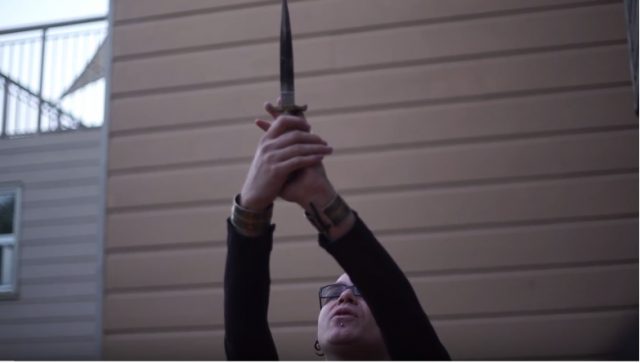 In the beginning of the Spring 2017 semester, two fliers went up by two different people to start the same club on SFSU. Satanist, Shea Bile and Occultist, Jacob McAdam had one goal in mind: to start an organization that allowed their own beliefs to mix with others and further their abilities at practicing magic and furthering their spirituality.

Thirty-one-year-old Bile messaged twenty-six-year-old McAdam suggesting that the two should converge, in which they did.

During the same time, the Internet was conversing over the idea of witches around the world putting a curse on Donald Trump.

The height over the conversation took place when singer Lana Del Rey tweeted, “At the stroke of midnight; Feb 24, March 26, April 24, May 23. Ingredients can b found online”

This subliminal tweet had people online buzzing, noticing that these dates were in direct correlation with the dates witches wanted to put the curse.

At SFSU, the Occult Club had a different idea about these curses.

“Magic can manifest in a variety of ways,” says Bile, “Reality is going to find a way to resolve and sometimes it’s not going to resolve in a way you want it to. So putting a curse on them can literally be a death curse, and that would mean Mike Pence would be president, so what is that going to do?”

The Occult Club decided that instead of putting a curse on Donald Trump, they are going to put a protection spell on the minorities Trump’s administration are affecting.

Since the organization was new, and some of the club members were new at practicing magic, they set a date to hold a ritual at the end of April, and in the meantime, hold group exercises.

“It’s gonna be a time for us to connect and strengthen our relationships on a spiritual level,” McAdam says, “For me, that’s really important, to establish that chemisty.”

The group exercises involved meditating together and forming a bond to get to know one another.

San Francisco itself has a history of occult practices.

In 1966, magic practitioner, Anton LaVey started the church of Satanism and owned a house in the Richmond District, where he painted the house completely black and held many rituals there.

LaVey and his circle did a curse on the Hippie Movement in 1968 because they felt it was an expansion of the Christian foundation. At the time, Satanism was against the idea of ultra collectivism and loving everyone because the felt that it was ill-informed. A few weeks after the curse, coincidently, the Manson murders accorded and had a negative effect on the hippie culture because the Manson murders were an extension of the Hippie Movement.

LaVey and his circle put a curse on the movement was April 30, the same day that the Occult Club planned to put a protection spell during the ritual being held.

Because of conflicting schedules, they could not make the April 26 day happen like everyone was discussing online, but the April 30 date was still special for Satanist, Bile.

Opening the ritual was El Verschelden, who would like to keep her full legal name a secret.

Each member read their spells protecting the LGBTQ community, burned them and then held hands, thanking “Ava Luna.”

At the end of the ritual, El Verschelden received a text from her director of a play she was helping direct, stating that he agreed to change a transphobic scene in the play.

After reading the text out loud, the Occult Club grinned and knew that what they were doing is more than themselves and knew they were making a difference in some way.