What In Tarnation: The Makings of a Play 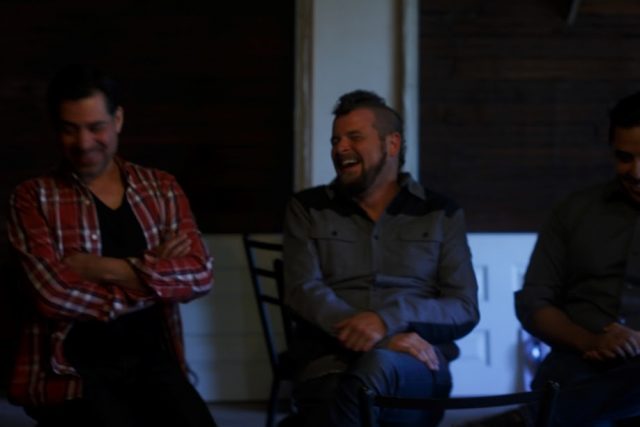 In a large, nearly empty room, with dark aging wood covering the floors and walls, Jeff Bedillion sits with his two friends, but moreso his business partners as he says.

“It’s all difficult.” says Bedillion. His friends, Bobby Lopez and Renato Robles echo the words, nodding in agreement. Each laugh as they think about the difficulties involved in making a play come to life.

“Everyday is filled with obstacles to overcome,” Bedillion explains. “But when it comes to revision, like when I’m pacing backstage listening to the words on stage and I hear the audience laugh and it’s worth it, not only for the message that you’re trying to set out but also that you’re able to entertain and captivate people, hopefully make their day better.”

The three of them are the team that puts together plays shown around the country. Bedillion writes, directs, produces, and sometimes acts in each play. Lopez and Robles also act, produce, design, and help in any way that they can when putting on a show. As a way to help support his plays, Bedillion works at a cafe in Hayes Valley.

“You know, it’s the only thing I live for. […] It seems like a little thing to a lot of people but for me it’s the only thing that matters, you know everything else is just making money and struggling through this life but when we get to connect with an audience– because for us what we’re doing now, we’re building sets and we’re doing things to create an environment to connect with an audience,” says Bedillion.
“But it’s not art for me until the audience hears it, they see it, they respond to it, and you make that connection. And that for me is magical, it’s kind of like love.”
Bedillion explains that the attic-like room is a space within the basement of his home in the Castro. The room usually serves as a place for rehearsals, however on this day there is nothing but a couple of large wooden structures that he says will become prop doors for the church in his newest play: What In Tarnation.

Each of them have been busy at work preparing for the debut, happening on June 2nd at the EXIT Theatre. The play is set at the Sunnyside Baptist Church, located in ‘the small southern town of Tarnation’, where churchgoers are celebrating the overturn of marriage equality. However, things turn sour for residents when a lesbian couple locks themselves inside, ‘hellbent on gettin’ gay married at the Sunnyside Baptist Church!’

For Bedillion, What In Tarnation has a familiar feel to it as he is from a small town in the South– Gadsden, Alabama. He laughs as he recalls his experiences with the church in his hometown.

“My family is not a religious family, but I loved the Bible, I was obsessed with the Bible. I loved the stories and I thought it was a very inspirational thing.”

Bedillion lived in a part of Gadsden known as Rainbow City, “which was the white part of Gadsden,” he explains. Each week a van would come through his neighborhood and pick up the people who wanted to go to church, and each time Bedillion would get in the van and go listen to the sermons. Eventually, he had to make the van drop him off in another part of town so that the church could not find his parents to tell them their son kept interrupting with imposing questions.

“I’ll tell you those fucking Christians, they hated me,” laughs Bedillion. “And they probably still do, and still will. And this play definitely reflects that kind of experience, but I learned a lot. And as a playwright you watch people– you know, I love people, I love the good and bad in people, and each person you get to experience shows you who you’re not and who you are. You learn more about yourself by watching other people than by anything.”

When Bedillion came up with the idea for the play last year, he felt that the world it is set in– where marriage equality has been overturned, was a reality that would not occur any time soon. Now he laughs looking back on the way he thought about What In Tarnation, and feels that this play has an important message– to stand up for what is right.

“It’s poignant, [What In Tarnation],” says Bedillion.
“It’s important now because we are in a place, a crazy place where we’re losing rights and these things are important. So let’s laugh and then let’s get really serious about it, that’s the point of this play.”
Bedillion plans to show What In Tarnation around the country in areas where it may not be well received, wanting to reach an audience where the play’s message may leave a more lasting impression.

“When you’re doing these plays in SF and New York, you’re preaching to the choir and they’re already on your side.” he says.

Renato agrees with this. “This play definitely does pose a political, social question regarding freedom and who does freedom belong to and who is in charge of taking it away from us.” Renato says. “Obviously in this case religion seems to be the evil part.”

For Renato, the most rewarding part about working with Bedillion has been the amount of knowledge he has gained. By learning from his mistakes and spending time figuring out how to manage each task, Renato has learned what it makes to make a play.

“You know, it’s like, for me, working with Jeff on now our fifth production, we have certainly come a long way” He explains. “And every time it’s been hard and right now it’s hard but it’s also very welcoming, you know, it’s growth, for me that’s what I get out of this performance.”

For Lopez, who plays a police officer named Officer Dixon, his smile widens as he thinks about What In Tarnation and the journey so far. He explains that for him, this play has been his favorite so far.

“Really from the start I was excited about it because this is the one play where I feel like this is such a homerun, this is just gonna be an incredible, incredible show,” Lopez explains. “I wasn’t sure how this was going to go but I felt good about this one. Jeff gave me the script, and between the casting and everything I just felt like ‘We got a good one’.”