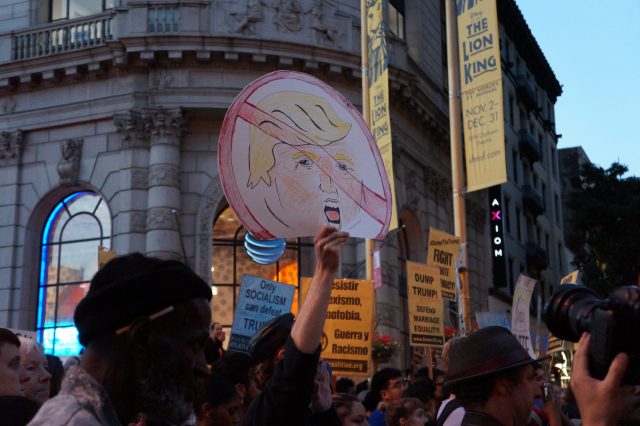 There is no question that politics and ideas concerning our new president have been the main topic of conversation of millions of Americans. You hear the opinions of people in your classes, overhear it during your commute to school or work, on social media, and even during award shows.

The November election was the first presidential election in which millennials made up the same proportion of the U.S. voting-age population as the baby boomers according to an analysis of U.S. census data from the Pew Research Center. Both generations are roughly 31 percent of the overall electorate. It’s understandable since there is now a lot at stake like the fate of immigration, international relations, contraception, and other important social issues. There is a lot citizens have to be outraged about, a lot to fight for and fight against.

Protests are not only growing nation-wide but globally. Take the Women’s March, for example. A total of one hundred thirty-seven cities outside the U.S. were in support of the march back in January, protesting various issues such as women’s right, reproductive reform, LGBTQ rights, and more.

I attended the protest in San Francisco back in November the day after Trump won the presidency. Thousands of people were in attendance. SFPD was there to monitor our demonstration that started from Powell street, through the Mission districts and all the way back to City Hall at Civic Center. Intersections were blocked. Cars that passed by honked their horns in solidarity. It was a peaceful protest, but no one there had peace of mind concerning our new president.

It was a beautiful event, nevertheless. The streets surged with a mass of people as representatives of the true United States– one that accepts and respects all genders, religions, and race– all came together in positivity.

We chanted for equality.

We chanted for human lives.

We chanted for love. We smiled, laughed, hugged, and commended each other on clever slogans and signs like “Pussy Grabs Back”.

It was a sea of love and determination, and as much diversity as you could possibly dream up, all moving as a unit towards a common goal—to bring awareness to some of the social and political issues the government should be addressing to accurately represent the public.

“That’s the power of peaceful protest. That’s our First Amendment right–our right to freedom of speech that is enshrined in our Constitution,” says Ana Brazaityte, a San Francisco artist based in the Mission and avid protest attendee, “This doesn’t go for this particular protest alone, but for all protests that have sparked and spread like wildfire all around the world.”

We are living in a new sort of America where activism gets a rebrand: “Protests are the new brunch!” It shows up on protest signs, tweets and is even the title of the January 30 episode of Jon Favreau & Co’s podcast “Pod Save America,” where Guardian reporter Sabrina Siddiqui explains that for a lot of young people protesting has become the new normal. For example, more than half a million joined the Women’s March in Washington DC in what was thought to be the largest inauguration protest ever, dwarfing the 20,000 when George W. Bush took office in 2001 and the 60,000 who protested against the Vietnam war before Richard Nixon re-took office in 1973. Instead of gathering with like-minded people having bottomless mimosas, we are gathering to call-out the bottomless injustice.

Not only people who oppose these protests, but also the government especially as well, should be taking this these countless protests not as another trend but as a massive gathering of people showing concern about the state the country and even the world is in.

No matter what cause you are fighting for in these protests, the issue doesn’t necessarily have to relate to you personally. The protests at the airport, for example—you don’t have to be an immigrant to be able to empathize with people being detained for hours with no access to counsel, their rights being completely violated–people who are coming into the country legally with proper documents but are still being detained. Just like in the women’s march, you don’t have to be a women to recognize and stand up to the fact that the rights of women have been under attack for ages.

Some wonder if these protests are even effective to create social and political change. An analysis by economists from Harvard University and Stockholm University found that protests do in fact have a major influence on politics. Research shows that protest don’t work because big crowds send a signal to policy-makers—rather, it’s because protests get people politically activated. Larger turnout for the initial protest had lasting effects on voting, political contributions, ideology, and future participation in the Tea Party movement.

“There is not enough data to correlate that knowledge of protests lead to tangible change,” says Argie Hill, a student at UC Berkeley and another avid demonstrator who has attended about 50 to 60 protests.

“As a person with marginalized identities I always question the motives of protesters. If they couldn’t see my humanity before, I sincerely doubt they see it now. But numbers lead to tangible change and as such, protests are important, however, organizing is the key.”

Though it might seem that way, Protesting is not a fad. New protesters might have been distracted or uninterested in the past when other people have been in the fight for a long time before picketing became popular. It’s a valid argument to criticize new protests, but no matter how long you have been protesting—whether you’re just starting now or have been doing so your whole life—it’s all part of a movement toward a better future. Americans are waking up and expressing the outrage they always knew they had, but felt they never had the courage to express.

“In many ways it’s intrinsic to a capitalist system to reform itself with the life blood of the working class and adapt to challenges against the status quo,” says Hill.

There’s definitely a lot more work to be done and protesting is just one of the first steps to eventually make a difference. “Protesting is war. We are not really fighting to be heard, we are fighting to exist,” says Hill.