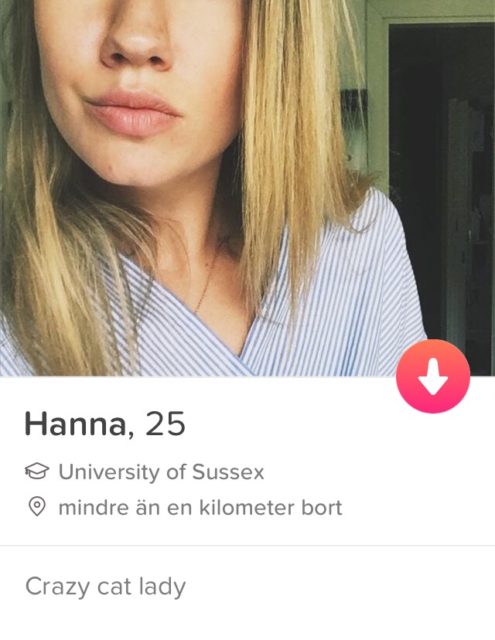 We live in a time where most services are just a click away, and love is no exception. Well, that depends on how you define love. Over the years several dating apps have hit the market, and amongst the most popular ones is Tinder.

Since 2012 Tinders’ users, now over 50 million in more than 190 countries according to The New York Times, have been swiping left or right with the goal of a so-called ‘match’, or a mutual like. You basically go shopping for a potential partner, friend, or hook-up based on their looks and a short description known as a bio.

Tinder as a City Guide

Students at San Francisco State University, where over 1500 international students call home, use apps like Tinder to meet people even if just for a casual hook-up, but that’s not the only reason students are drawn to Tinder. Surprisingly, a lot of international students use the app for more than just a quick way to get laid.

25-year-old Hanna Grimsborn, a marketing major from Sweden, has found Tinder helpful but not in the way you think.

“I actually never meet someone from Tinder for a date, and I think it’s mostly boring to chat with people I don’t know,” she explains.  “Recently I realized I could use the men I matched with to get recommendations on good bars, night clubs, restaurants etc.” 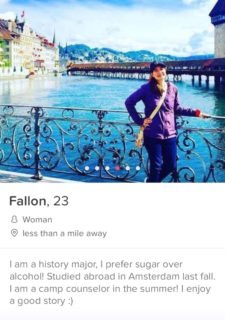 While Grimsborn’s method has resulted in various tips on stuff to do in the city, a lot of men still want to get something more out of a match.

“They usually respond friendly to my questions about recommendations and suggest me to go there with them. I never do, I just take away our match instead.”

Apps like Tinder can be somewhat of a meat market, and Grimsborn is very clear on why she has issues with this modern form of dating. In her experience men write stuff they would never have the guts to say in real life, which has led to both compliments and sexist comments. Men she has been matched with also seem a lot more interested in talking about themselves rather than getting to know new people.

“I’ll avoid those guys,” she says.

Fallon Salomon, a 23-year-old history major from SF State, went out to explore the world with Tinder as her companion. During her semester abroad in Amsterdam, she was introduced to the notion that dating apps can indeed improve the quality of her social life. Even though Salomon only lived in the Netherlands for six months, she had a four month-long relationship thanks to Tinder. She also got to learn more about the Dutch culture through people she met on the app.

While the relationship didn’t last, Salomon says she has had great experiences through Tinder, meeting people she wouldn’t have met otherwise.

When you move to a different country there are so many new impressions. The language is different, the culture is different, the food is different, even the traffic is different. Typically you will use every opportunity to get to know people so you don’t have to be alone. According to Salomon, it’s easier to make friends on Tinder abroad than at home.

“I think people are much more outgoing abroad. There’s a certain kind of curiosity there, that I just have not experienced here at home. I’m not sure why that is!”

Social culture variates throughout the world, and therefore people from different parts of the world will use Tinder in different ways. Today, the app has users in more than 190 countries, so using Tinder as a traveling tool can actually serve as a cultural journey.

“Some of my most important memories from studying abroad were born from the people I met on Tinder. I talked politics with all of them, and appreciated, and gained from their perspective,” Rebecca explains.

Rebecca, a 26-year-old international relations major from SF State, reminisces of her semester abroad in Israel, and the friends she made through Tinder.

“They were never really tour guides, but spending time with their friends and participating in their traditions was an invaluable experience of cultural immersion.”

“They think because we are on a date, hooking up is expected or guaranteed, regardless of if there is chemistry.”

By now you might think that women are the only ones using Tinder for things other than sex. While research shows that men use Tinder more as a hook-up app, there are still some using it to make friends.

When Fabi Rausch, a 22-year-old electrical engineering major from Germany, traveled through Thailand, Malaysia, and Singapore, he found Tinder helpful for getting in touch with locals. However, he wouldn’t want to get a girlfriend through the app.

“Apps like Tinder can be very objectifying because you judge people based on their looks. I made some friends when I was traveling, but I prefer meeting people in real life” Rausch explains.

Dating apps like Tinder are being used for much more than one-night-stands. Instead modern technology can, and is, helping young people connect with new cultures and languages, especially while being abroad. Imagine being placed on the other side of the world without your main form of communication. It can be nerve wrecking to not know anything or anyone, and for a lot of young people dating apps take some of this pressure away. It’s an informal platform that helps you enter a new society. Bottom line here is that dating apps can be used for so much more than dating. Perhaps your new perspective on life is just a swipe away.