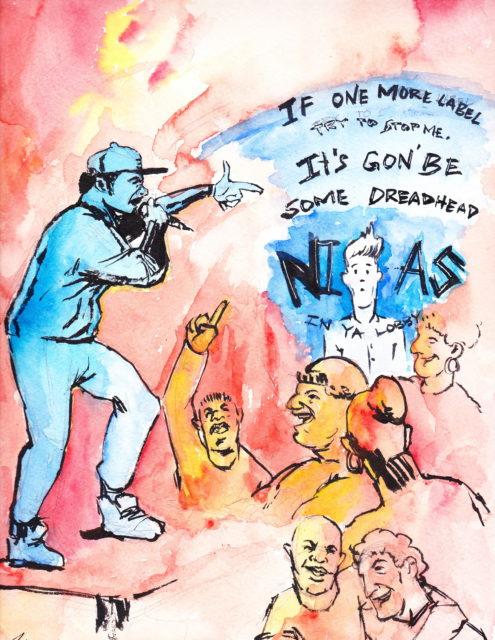 Hip hop; it’s more than just a genre of music, it’s a culture, it’s a way of life, it’s what some people see when they look out of their window every morning, or when they are walking down their streets.

We scream the lyrics along with Kendrick as though we have lived life through his eyes, but we haven’t. We enjoy his art, what he is doing with the experience he has had, and his story-telling capabilities, but most hip-hop consumers haven’t lived it. When people who aren’t Black use the hip hop genre as the glue between them and an experience they could never understand that’s when problems begin to arise – a problem that involves the controversial usage of a particular word.

Let’s play a game: what widely used word can mean friend and homie, but can simultaneously be grossly offensive if used in a certain way against a certain group of people?

“I don’t like it, I don’t approve of it,” uttered Zemaye Jacobs, communication major and member of the Black Student Union here at San Francisco State University.

This was a popular reaction to the question ‘how do you feel about people who aren’t Black using the word?’.

If a particular word is coming to mind, ask yourself this: Do you use it, do you stop other people from using it, do you know its history, what in your life has contributed to your desensitization of the word? And yes, it’s that one that starts with an ‘N’.

Do you scream those Drake lyrics at the top of your lungs without a care in the world, or does your social consciousness help you refrain?

N***a, it holds a unique and even confusing duality; it’s safe and it’s not, it’s fun, even hip, yet withholds an immense ignorance if used in the wrong way. There is a less problematic solution, which entails not using it at all. However, there is no magic potion to eradicate the damn thing. Its roots lie in racism, anti-Blackness, and colorism, to name a few, all actively perpetuating systemic issues in this country.

Blair Thomas, an art major and member of BSU at SF State says, “It does not matter if it is a part of pop culture or not. It’s not a word for non-Black people, especially if you cannot respect actual Black people.”

“The attempts over the years to take that word and turn it into something else, have been failed attempts,” explained Professor Davey D. Cook, as he walked to his bus stop.

Cook is a professor in the Africana studies department, who teaches a hip hop course at SF State.

“It’s still a pejorative and people use it as such even when they try to claim that they have somehow sanitized it.”

Connotation aside, this is an example of tense vowels transforming into lax vowels, explained by linguistics Professor Chris Wen-Chao Li. Like ‘player’ being pronounced ‘playa’ to ‘fit in with the cool kids,’ so to speak.

“This is a pretty typical example of phonological reduction as part of grammaticalization,” Wen-Chao Li says.

Phonological reduction, or simplifying how words are said, happens all time and a lot of the time we don’t even realize. Wen-Chao Li provided this example: ‘Jesus’ turned into the expression ‘Jeez’, which then turned into ‘Gee’ as in “Gee, thanks.”

With that being said, the usage of n**** has been normalized immensely. Imagine being a fly on the wall at your favorite rap concert in the Bay Area, at the Oracle Arena, which holds about 19,000 people. Thousands of people are yelling n****s around left and right.

It often becomes a matter of picking your battles, because so many people say it.

Many non-Black students feel the same way about the controversial word.

“I have some hispanic friends who use the word and there’s this controversy of whether it’s accepted for any person of color to use because we [hispanics] have suffered too,” said Rosa Gutierrez a biology major at SF State.

“…but I don’t think it’s right for us to use a word that doesn’t belong to us, so I don’t agree with my friends use of the word.”

When political science major, Alex Ayala, was asked what his response is when people around him are using it he said that he always stops it.

“Even if I’m that one person who maybe is ‘overreacting’, it’s just disrespectful,” Ayala states.

But does using it when rapping to your favorite rap lyric change the hundreds of years of history? As Black people gained more rights post-slavery, the word remained and still does. Consumers have allowed the word to have derivative qualities, which as a result gave many reasons to grant themselves access to the word.

“If I hear them say the word in a joking way or like playing around with friends, I won’t confront them about it,” says theater major and African American student, Alissa Harris.

“I don’t like the word period, even when other Black people use it,” marketing major and African American student Donna Tate says.

The Black response to its usage is of the varietal form. Ranging from not minding at all, to being fine with it as long as it’s not of a serious racial attack, to some not wanting to hear the word from anyone. Regardless of confrontation, it tends to make people feel some type of way.

“I think in the face of the type challenges many of us face as Black folks and the type of oppression people are dealing with daily… that’s the ultimate micro-aggression especially in spaces where you are not the majority,” Davey concludes as his bus nears.

I can only wonder that if we as Black people were united in how we feel about ‘n***a’, then would society, or non-Black peoples, also be on the same page when it comes to the usage of the word. OR if racism died with slavery instead of manifesting itself into a systemic form, would the word usage still be as impactful. Black people are about three times more likely to be killed by police force than any other race still today. The original meaning continues to exist and shows its ugly head with every pull of the trigger.