Seeing Hope Through the Smoke 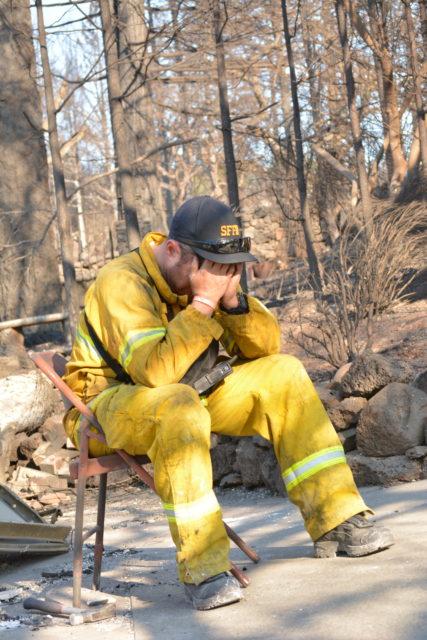 The air smells like a mix of chemicals and about a thousand bonfires. It feels as if there’s a cloud of sadness floating above the town and neighborhoods of Santa Rosa, California.  Thousands have lost everything.

“Did you hear the story about the ring?” asks Ian Derammelaere, a firefighter from San Francisco’s Fire Department.

“One woman was searching for a wedding ring,” adds Eli Thomas, another San Francisco firefighter, dressed head to toe in fire gear.

The two firefighters, exhausted and worn out, are covered in ash and dirt. Ian  and Eli, along with other members of their strike team, had been sent to Sonoma County in order to fight the North Bay Fires.

“There was a big slab of stucco, as long as a driveway,” says Eli, while using his arms to mimic just how large the slab was.

“A lady called me over to help her move it. She goes ‘hey, can you come help me lift this up? I want to look under it.”

He begins to smirk as he continues the story.

“I was like, ‘I am so flattered you think that I’m that strong!”

Eli, with the help of other firefighters, decided to break the stucco up into pieces, making it easier for them to peel back. The woman explained to the men in yellow, that she was looking for a wedding ring. The area where the slab of stucco remained used to be her bathroom. There, she had an amour full of jewelry, which held the missing wedding ring. The woman continued to look through the rubble as Eli and the rest of the crew continued through the neighborhoods, searching for hot spots.

“I told my cousin the story about the woman who was looking for a ring,” explains Eli.

“Later he called me and was like, ‘Dude! Some lady is on the news talking about how some fireman helped find her ring!’”

“And that was me,” the exhausted firefighter says while grinning from ear to ear.

Ash, toasted Hondas, and charred ceramic angel figurines are all that’s left in the eerie neighborhood of Fountain Grove in Santa Rosa. Coffey Park, along with other neighborhoods in Sonoma County, mimic similar scenery.  The county, known for its wine and natural beauty, looks like a scene from The Walking Dead.

The wildfires ripped through 107,407 acres of land, destroying thousands of structures, many of them being the homes. Town landmarks, like a local Applebee’s and Arby’s, are now unrecognizable piles of metal. Those who wander the damaged town of Santa Rosa wear white surgical masks in order to protect themselves from the smoke and chemicals within the air.

Since the start of the fires on October 8, more than 2,900 fire personnel from around the country have been called to California’s North Bay region. Those numbers don’t include the hundreds of police officers responsible for protecting the areas of destruction or the thousands of volunteers helping those affected.

“This is a once in career type of fire,” says SFFDs Jesse Bautista as he stares at the remains of a brick fireplace.

The four San Francisco firefighters, Lieutenant Jason Simmons, Jesse Bautista, Ian Derammelaere, and Eli Thomas begin to reflect on their week as they sit amongst the incredible amount of rubble.

“I turned on the news and they were talking about the Atlas Fire. It was just before 11 o’clock,” Lieutenant Simmons recalls as he begins to realize what was going on.

He counts the numbers of fires with his fingers as he talks.

The fires in the Sonoma county region spread, like they say, ‘like wildfire’. Up to 70 mph winds were the cause of the rapid spread. An estimated 90,000 people have been evacuated from areas surrounding the fires. Simmons, being one of them.

“My wife was like ‘why the hell did you bring the leather helmets?’,” says Simmons as the group of four laugh in agreement with his decision.

He explains that the two leather helmets were the first helmets he received when starting his career. They symbolize a lot more than just helmets for the San Francisco firefighter.

Thankfully, the Lieutenant’s home remains standing. For other Santa Rosa Natives, that is not the case.

“The biggest thing, the thing I keep reflecting on, is just download all your pictures,” says Eli Thomas when discussing the amount of photos families have lost in the fires.

“Those are the things that you can’t get back. Those are frozen moments in time,” concludes Thomas.

Sophia Lassen, a senior at San Francisco State University was born and raised in Santa Rosa. Lassen’s family evacuated their home located in the neighborhood of Larkfield around 2 a.m.. Her family was woken by the sounds of honking horns coming from neighbors.

The fire absorbed Sophia’s neighborhood. With little time to grab valuables, her mom was able to grab a few photo albums before the fire destroyed parts of the home.

“Where I had grown up was virtually gone overnight,” recounts Sophia, as she looks down at her interlaced hands that lie on her lap.

Police have now begun to leading homeowners into the areas where the fires have destroyed their homes. Many have already begun rummaging through what’s left of their burnt belongings. Some homeowners, like the woman who found her ring, have found some valuables thanks to the help of fire personnel. Others, remain empty handed as their belongings have been reduced to nothing but ash.

What remains standing in these neighborhoods are dozens of a brick fireplaces that once warmed rooms.

“Eventually there will be a positive side, it’s just going to take a couple years to see,” Lieutenant Simmons explains.

And Lieutenant Simmons is right.

The Bay Area has already come together to provide incredible amounts of support for the friends and families that have lost their homes. Thousands of donations poured into Sonoma County, causing donation centers to stop accepting further donated items.

Thanks to the incredible amounts of fire personnel, police, volunteers, and the support of the Bay Area, Sonoma County, along with the other areas of destruction, will flourish again.