We are a Culture, Not a Costume 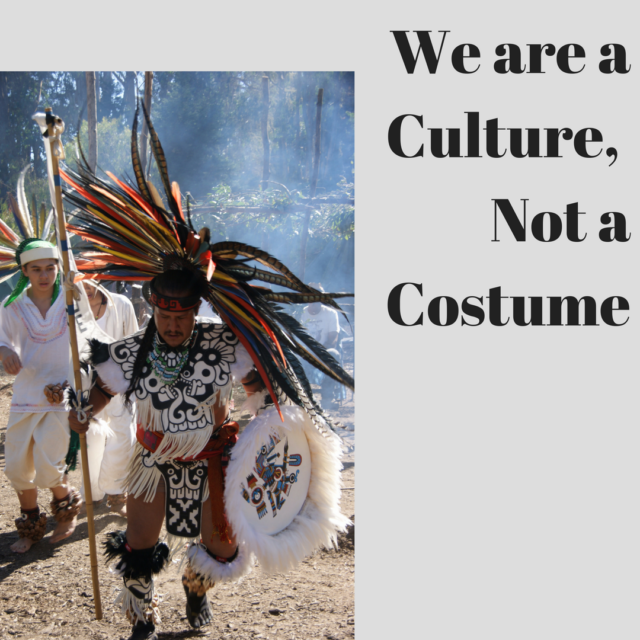 The time has come where society once again shows us how absurd their choice in costumes can be. Sadly, it hasn’t gotten any better throughout the years. We’ve seen things from misinterpretation of the Native American culture, to blackface costumes, to your “typical” Mexican in a sombrero.

Let’s get one thing straight, none of these things are okay to ever wear. Speaking for all races and cultures, we are not a costume.

Every culture has its own unique history, and with that, a lot of it is carried on through what they wear. Fashion has been a part of our lives for centuries, and not only does it distinguish one culture from another, it also offers a cultural background for others to learn about.

When it comes to Halloween, dating back to the ancient Celtic festival of Samhain, it used to be a day where the Celts believed this was the day the dead would return. Through time, it has become a day where people dress up in their choice of costume and collect candy. The biggest problem here though is the choices of what to dress up as.

More and more costumes continue to pop up each Halloween that ultimately bring up questions like ‘do people not think about the statements they are making?’ ‘why would this ever be put out on the market?’, and ‘what, if any, cultural research has been done?’

“I don’t understand how or why someone would want to dress up as something that symbolizes a sad part of the world’s history?” Pack questions.

“Maybe the thought process of this costume was to commemorate Anne Frank and those affected by the Holocaust. However a child’s Halloween costume is not the right way to do so. To me, Halloween is about dressing up as something fun that you like. The Holocaust does not match this description.”

This isn’t the first time companies have put out costumes aimed for children that in the end show a lack of cultural education. Among these costumes we can find such things as the popular Disney film Moana, Maui costume which sparked up a controversy among islanders. The costume was featured on Disney.com and according to the Huffington Post was removed. The costume featured a brown-skin body suit covered in traditional Polynesian tattoos.

“Let’s face it, our symbols and our emblems, who we are as a people have been used by western society for their pleasure, not for ours,” says Paul Kevin, a hula instructor from Hawaii.

“These companies should really ask themselves, what are we trying to do? I’m not saying don’t be funny, but you have great license to pick and choose things and deal with it. If they can’t be more creative than that, then they can’t be creative at all.”

With all the commotion cause by our current President, it’s no surprise that many costumes this year are showing a wide range of racism seen in our day-to-day lives — like dressing up as a border control officer.

Yes, you read that right, this year Spirit Halloween thought it would be ok to advertise this costume as “fun.”

According to Gothamist, the costume was being sold next to Donald Trump masks. However, just last month, it was officially banned. The only problem is that the “sexy” border babe female version of this costume still exists, and it has sold out online at Spirit Halloween.

Recently, the LA City Council replaced Columbus Day with Indigenous Peoples Day, according to the LA Times  they were “siding with activists who view the explorer as a symbol of genocide for Native Peoples in North America and elsewhere.” A tremendous step forward for the Native American culture indeed.

With all these changes going on, why is it that people still choose to dress up in what they believe is Native American attire? If you look at any online Halloween store and search “indian costume” you’re guaranteed to find things that, if you’ve done your research, has nothing to do with the Native American culture.

Sherri Chiappone, 46, is Native American and originates from the tribes of Karuk, Yurok, and Shasta in California. She states that what her culture wears includes tons of necklaces, usually abalone, shells, accompanied by deerskin leather apron skirts filled with shells. What Halloween stores display as “Indian” is simply a slap in the face to their culture.

“I do not appreciate people not understanding cultures and thinking that it’s ok to dress and imitate what they think is another culture’s look,” Chiappone says.

“It hurts, as a Native American, to see that and I feel that kids and parents aren’t taking the time to understand or learn about our culture. That’s not who we are, that’s not what we look like.”

What is “blackface?” It refers to a non-black performer using character makeup to make themselves look black. This dates back to the seventeenth century when usually whites were entertained by those of dark skin. One famous performance in 1830 is that of Jim Crow, where a performer by the name “Thomas “Daddy” Rice, blackened his face with burnt cork and danced a jig while singing the lyrics to the song, “Jump Jim Crow.”

One recent show that targets this issue of blackface costumes is the hit Netflix series “Dear White People,” which all begins with the story of a group of white students at an Ivy League college putting together an offensive blackface party. The story then follows four black students on their journey to change these offensive acts.

Emenet Geleta, a 21-year-old student at San Francisco State University and a member of the Black Student Union feels that these companies are selling cultures in the most stereotypical ways.

“They get away with it due to the lack of cultural awareness. People get ridiculed for showing pride in their own cultures yet others want to turn around and dress up like them for a day. And that’s my problem with culture appropriation,” Geleta elaborates.

“Others want to wear braids and bindi’s, for example, to look “cute” or “trendy,” and those who are actually from those cultures get judged for it by going against the social norms of dress, or get stigmatized for showing their cultural pride.”

The main point is for everyone to have the decency to respect cultural appropriation on different races and cultural backgrounds, this especially includes Halloween stores. Here are some tips on how not to get yourself jumbled in the mess of offensive costumes:

If it represents a certain culture, don’t wear it.
Ask yourself, is this appropriate?
Do your research.