The Keys to the Depot 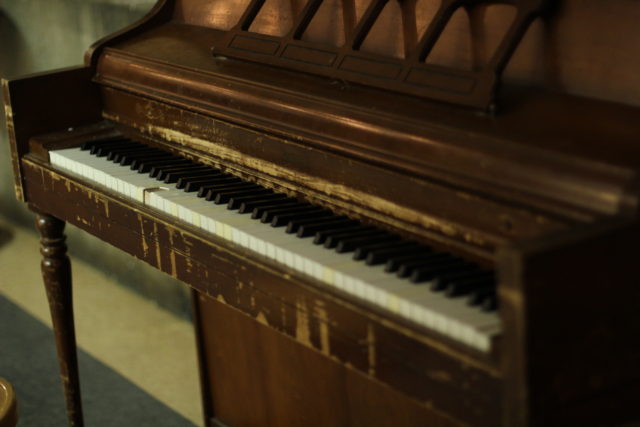 An old Kimball piano is nestled among the tables and chairs in The Depot at San Francisco State University. Surrounded by students who get food from restaurants in the food court, e.g. Farm Fresh Underground, or buy drinks and/or beer at the pub, occasionally one can hear its key being played by a student. The Depot is located in the Lower Conference Level of the Cesar Chavez Building. But why is this piano here? Where did it come from?

The answer is: nobody is really quite sure, but it serves a particular function to the student body.

The wood body of the piano feels like a skateboard that was waterlogged from a trip through the rain; the keys have lost their stunning pearl whiteness and sit unevenly across; the smell of dust and spilled food/drink lightly emanates from the housing and lid. The piano also plays as though its been played one too many times, the keys lag and stick after they react to touch, creating a muddy hand-feel.

The piano looks like something someone would leave on the corner for months without anyone taking it, yet it serves a purpose to the students at SFSU.

Owning a piano is a privilege that not everyone has. Providing a piano that anyone can play, if they build up the courage to fill the Lower Conference Level with the sound of their piano skills, is something that gives all students the opportunity to play and potentially learn piano, something they might not have had the chance to do before. It also gives students the chance to overcome their stage fright by playing in front of, albeit, distracted students. But the bottom line is that this hunk of wood, spring steel and ivory, is a tool that students use to learn, which seems like an obvious positive, especially for a university.

“I’m here for five days of the week,” said James Hall, an english major at SFSU.

“I never owned a piano before, but I learned how to play from a class I took last semester.”

Hall enjoys playing all genres of music in order to avoid musical weak spots, adjacent to not skipping leg day at the gym. Some of his favorites to play are “Chasing Cars” by Snow Patrol and “Variations Aria” composed by Johann Sebastian Bach. Hall comes from a musical family, which has given him an urge to learn the piano, and is thankful for the old Kimball in The Depot.

Students like Hall are perhaps the most obvious and most important example as to why there should be learning tools, like musical instruments, made accessible to students on campus. Without the piano in The Depot, it’s likely that Hall would never be able to fit piano practice in his daily routine. Skills like learning an instrument, require consistent practice just to maintain a certain level of expertise. Therefore, The Depot, or at least the convenience of placing a dusty piano on campus in general, has kept students’ musical ambitions alive.

SFSU is a university that teaches piano classes in their music curriculum, so why’s the only piano that students have access to an antique resting in a food court?

It’s definitely not the optimal place for a piano. Ramen, pizza, sandwiches, and beer conflict the smell of the room, resulting in a distractive practice place, while dialogue, silverware-clattering, and the beeps of the arcade downstairs suffocate the sound of the piano.

This isn’t the only piano on campus, but it’s the only one that all students have access to. There are pianos that collect dust until a performance or formal recital, like the seven-foot model C7 Yamaha, a much larger piano, which enjoys a good reputation among musicians, located in Jack Adams room. There are also pianos scattered across the Fine Arts Building, alas they are only for music majors.

While it is a nice addition to The Depot, this concept has more to add than one random, beat-up piano in a food court. This success should result in a spring board that inspires the school to offer more musical educational tools to the whole student body. A school ought to strive to educate students to goals of both quality and quantity of education; providing as many tools as possible is an efficient way to do so.

This is a contested issue because some faculty and students don’t see a reason for a renovation. The prior perspective can be summed up with the old saying “give an inch and they’ll take a mile,” but this perspective can look crude especially when considering educational tools.

While nobody seems to know exactly why that old piano is there, Margie Williams, the SFSU piano technician, has seen this type of piano before – the type of piano that’s been abandoned and uncared for. Pianos that tend to have a similar story.

“The problem with pianos in public spaces is that they become orphans because nobody is really there paying attention to them until there’s a big problem,” Williams said.

“They tend to get abused, in the form of drinks getting spilled inside, wear and tear in outsized proportion to the maintenance budget, etcetera. Technicians are generally reluctant to work on these types of pianos because it’s really discouraging. I certainly support the idea of public access to pianos, but nobody thinks about the maintenance required or tries to monitor what goes on around the piano. Eventually the pianos get so awful that nobody wants to play them.”

In all likelihood, the piano was left in The Depot because it would have been thrown out otherwise. It’s also likely that this piano will maintain resting in The Depot until it is deemed completely unplayable. This will most likely result in its destruction, but what’s unknown is whether or not its death will be accompanied by rebirth – a new, or another old and forgotten, learning tool for the students at SFSU.

Regardless, not all the students who use the piano on campus depend on it to be their one and only learning tool. Tiffany Duong, a student who has been playing piano for sixteen years, and owns a piano at home, plays Disney and musical soundtracks, like La La Land, at The Depot about once every two weeks simply for fun.

“It’s a little bit old and the keys are small and close, but it’s convenient,” Duong said.

“The piano I have at home is better a lot nicer, but I just play this one for fun because I commute far.”

While seemingly less important than being a tool to learn, having a piano next to a bar is a fun concept for a lot of students. Despite Duong having the option to practice from home on a much nicer piano, she still really enjoys playing the piano in The Depot from time-to-time.

There are even music majors who have access to the exclusive pianos who still choose to play on the piano in The Depot for similar reasons. While it is most-definitely the worst piano on campus, speaking from a technical standpoint, the students that use this piano have found value in it from its unique novelty. Adam Medina is a music major at SFSU who chooses to use the pianos located in the Fine Arts Building – music major use only – and the piano in The Depot.

“I use this piano, lately, every Tuesday and Thursday between classes,” says Medina.

“I’d say I mostly practice in the Fine Arts Building, but if I’m grabbing a beer or something, I’ll use this one. Nice atmosphere and it’s more social; people come to you.”

That’s not the only reason Medina enjoys using this piano. Despite it being undeniably a worn and overused instrument, there’s a certain warmth that doesn’t come with a brand new, expensive Yamaha.

“This piano has a honky tonk type of feel. I just feel like older pianos have more character. I mean, it’s beat-up and looks like a run-down piano in a saloon, but it sounds good, despite not being maintained.”