We Have the Power 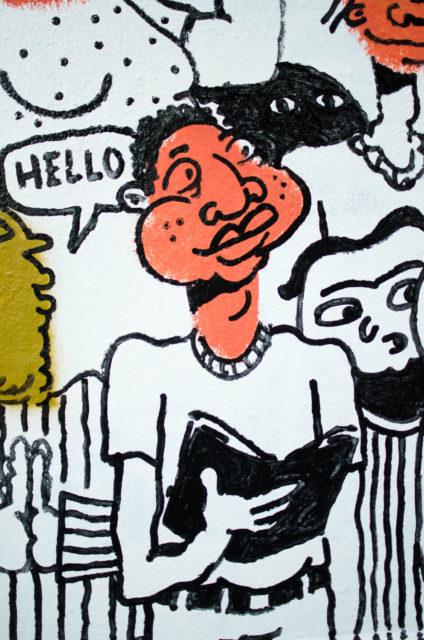 A section of Lenworth McIntosh mural entitled, "All Power to the People," on September 26.

“How do we create that revolution?”

Almost mirror-like, the art is intended to help people of color see themselves in a world that doesn’t thoroughly grasp the concept of equal representation. A world that acts as a broken mirror.

Lenworth Mcintosh, who goes by Joonbug, is an established illustrator, film photographer, and part of an art group called The Black Mail Collective. This 30-year-old with Jamaican roots has found himself in Oakland after living in states Florida and Texas.

Starting with five black males, The Black Mail Collective’s – originally The Black Male Collective – first mission was to depict the Black man’s experience in America through their art. Now, with women as a part of their group, male turned into “mail” and the platform changed to be hyper-focused on people of color’s experience as a whole.

“Everywhere I’ve been has lent itself, enhanced my ability to create what I see,” Joonbug said.

“I’m an accumulation of all the places I’ve been and the people I’ve met.”

His wrist goes up and down as he strokes the wall with paint.

In the thick of the busy streets of South of Market,  or SoMa if you’re a native, which is basically downtown San Francisco, but not the downtown with the brief cases and gentrification. He paints in the downtown that is the home to the homeless, or sans-abri if you’re French, the downtown where sidewalks double as a place where many come to rest their heads at night.

“You got skills bro,” and “maybe you should add some stars right there or the Golden Gate Bridge in that corner there,” are some of the many things heard by Joonbug on a daily basis.

Passerbys seem incapable of passing by without smiling, commenting, or adding suggestions.

“I feel like I’m the first artist to paint out here,” Joonbug utters.

“…or at least to paint black faces.”

A lucky wall at Howard & 6th st. gets to be the home for the mural he is working on, until it is eventually painted over.

A friend, and fellow artist, Colt Platt expresses his appreciation for Joonbug’s work.

“It’s refreshing to see someone do something different, something that most would be afraid to do.”

He acknowledges everyone that acknowledges him, and speaks to everyone with such strong familiarity you would think he already knew them.

“There’s a beauty in building that bridge between like the super poor and well off and showing that we have all these layers to us, but historically we’ve only been shown two sides,” Joonbug sighs.

People typically become professionals at turning a blind eye when it comes to encountering people on the street, not him. He kindly accepts every comment and advice from those passing by with grace, knowing full well he is going to stick with his own ideas and do things the way he has always known how.

Occasionally he gets dangerously close to the busy traffic street to get a wide view of the progress he has made on his work, establishing what needs more work, and then walks back over paintbrush in hand.

Done for the day, he heads out at around 6 p.m.

It’s about five blocks to get to the bart station, and he stops almost every 30 seconds to snap pictures of his environment and the people around him. He is a man of the people to say the least.

Back at his Oakland studio he is in his element, like two puzzle pieces fitting together – but almost better, contributing to an aesthetic not even a Tumblr account could dream of emulating.

He sinks into the small loveseat growing more comfortable by the second soaking up every question like a sponge, dwelling on them.

‘Power to the People’ are the words that he wants to accompany the mural.

His work has no political intent but he does include messages within his work that are up to the viewer to decipher.

“So much of our lives are governed by people telling us what to do or whatever. Even like when your parents tell you what to do, there’s a certain level of respect but after a while, especially when you’re a teenager you start to rebel because you kind of have a problem with it,” Joonbug says.

He explains that if people really want to dig deeper they are at liberty to.

In protest you have a lot of room for error and a lot of complexity and a lot of fake shit because humans just love being seen.
He tells of a character he created of a tall man wearing a hat, a very simple hat one would assume, but like his other works this goes deeper.

“The deeper you go into this character the more complexities you find. The hat can represent so many things-it can be protection, it can be warmth, it can be just style, it can be anything,

protection…. can lead to different things,” Joonbug added gesturing delicately with his hands.

here in America or throughout history,throughout time. There are all these things but it just boils down to a man wearing a hat,” Joonbug continued.

Political messages have snuck their way into art since the dawn of time, art has always served as a visual relief from the real world issues while reminding us that they still exist. It has served as an escape and an answer.

“That’s why I hate pop art sometimes because there’s a very thin line between decoration and substance.”

Now more than ever our generation is seeing heightened racial tension. In response to whether that has created a turning point in the messages included into his art, he explains how everything that people do after these grave incidents, which show our country’s true colors, is just “reaction shit.”

He stresses the importance of attaching his messages on a level where the viewer will not forget, where it’s an after thought as opposed to an initial.

“In protest you have a lot of room for error and a lot of complexity and a lot of fake shit because humans just love being seen,” Joonbug explains.

Desensitization is the common cold of our generation. Fortunately, we have social media to visually see all of the disgracefulness of systemic racism, but because it is online people become occupied with new posts and forget about the old ones.

What seems the most important to Joonbug is affecting people long term and causing real change with each stroke of his brush and each snap of a moment.

With growing comfort Joonbug becomes one with the small couch.

“I feel like… real change takes place within yourself.”