50 Years in the Making: Project Rebound Celebrates its Accomplishments 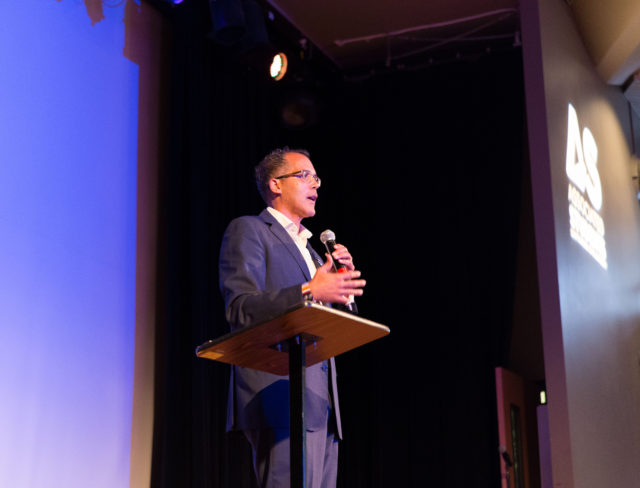 Families, pairs, and solo guests trickled into the dimly lit Jack Adams Hall found at San Francisco State University. Some dressed casually, donning clothes they probably wore all day, while others wore attire that was fitting for a prestigious awards ceremony.

Volunteers handed them red tickets and well-designed programs that read “Celebrating 50 years of Project Rebound” on the cover. On the back side of the clean cover was the program’s objective: “a special admissions program assisting formerly incarcerated individuals wanting to enter San Francisco State University.” Upon entering the dark room adorned with purple and yellow balloons, guests met the men behind the proud smiles, Jason Bell and Curtis Penn, the regional director and interim director of the program, who were happy to see the event off to a positive start.

The visitors, some new and some used to the campus of SF State, slowly made their ways to the round tables, covered by black table cloths and several cups of water, while caterers rushed through the hall, setting up trays full of steaming foods that waited to be devoured.

Family members of Dr. John Irwin, the founder of Project Rebound, settled themselves at a table in the middle of the welcomed commotion. The caterers, all matching with surprisingly clean, white chef coats and white pants, already rushed from table to table, refilling any empty glasses they could find.

As the hall continued to fill with forty, fifty, sixty people, Bell rushed to the stage, studying the crowd to find the right time to start the event. He dressed for the part with a black button-down and a diagonally striped tie to accompany his walnut brown suit. Penn finished his conversation with a guest and slowly moved towards the front of the stage, focusing his attention on Bell. It was already 4:45 p.m.; the whole affair was fashionably late by fifteen minutes.

“A huge obstacle for Project Rebound is funding,” shared Penn, his deep voice carried through the almost empty conference room on the third floor of the César Chávez building. “We need the funding to continue the outreach at a high level,” he explained.

Penn was wary of the two Golden Gate Xpress reporters with their cameras pointed on him, but decided that it would not become a nuisance for him. He and Bell were popular and caught the attention of several news outlets, including KQED. It was one week before Project Rebound’s 50th Anniversary celebration, but the event became an added stress to the interim director’s already busy days.

The 54-year-old’s days are based around a recruitment strategy to get more people in the program.

“We’re going to the jails and prisons and into underrepresented communities,” shared Penn as his demeanor softened with each word. “We do a lot of resource fairs where we connect with men and women who were formerly incarcerated who can benefit from a program that assists them to matriculate into the CSU system.”

Project Rebound started in 1967 thanks to Dr. Irwin, who went through the criminal justice system before earning his bachelor’s degree in sociology at University of California, Los Angeles. After earning his degree, he began teaching at SF State, where he felt a program was needed to help those in the prison system become acclimated to life and education outside of their current situation. He created Project Rebound with the intent of helping the formerly incarcerated find a path back into the education system.

50 years later, Irwin shared some similar experiences with the current interim director. The San Diego native can understand how difficult it can be for someone to transition from a prison to a college because he went through the criminal justice system himself. With the help of Jody Lewen—the founder of the Prison University Project, which gives the men in San Quentin a chance to involve themselves with higher education—and Project Rebound, Penn could graduate from SF State.

As he tries to extend that same helping hand to those being released by the prison system, he and Bell are pleased to look back at the success of their former students. In 2016, Project Rebound had 10 students graduate from SF State while their current students have an average GPA of 3.23. With such committed students, the program holds an eighty-seven percent retention rate and a graduation rate of eighty-six percent.

Penn and Bell wanted to properly honor Dr. Irwin and the students of Project Rebound with a celebratory event, but ran into several problems during the several months it took to plan it. One of the most glaring problems was the funding the event. Fortunately, with the help of President Wong and the Associated Students of S.F.S.U., the organization could pay for all the necessities for the celebration.

Hilda Villanueva, a marriage and family therapist from the county of San Mateo’s health system and a former SF State alumna, reached out to Penn about the Vocational Rehabilitation Services Workcenter in San Mateo. Villanueva wanted to let the people in the VRS program, who are mostly formerly incarcerated, help cater the event. Penn agreed and was excited to work with them.

As they planned the 50th celebration, the idea of an art gallery began to take off in Project Rebound’s small office. “The art gallery fell in our laps” exclaimed Bell, recounting the 23 pieces of art displayed in the exhibit. Each piece was created by a student in Project Rebound or someone that went through the legal system. Even though it was a last-minute idea, they had the chance to secure a spot at the art gallery located across from Jack Adams Hall, which usually needs to be booked months in advance.

“Early on we worried the speakers wouldn’t show up, although I knew Jody was good,” Penn remarked. With a little work, Penn convinced Honorable Judge Trina Thompson and Law Professor James Forman, Jr. to speak at the event.

The event ran almost seamlessly. Although it started later than usual, all the attendees seemed to enjoy themselves while Penn and Bell successfully honored the legacy of John Irwin and Project Rebound.

“Obviously the goal, the long-term objective, is to have a Project Rebound program at all twenty-three CSU campuses throughout the state,” Penn shared.