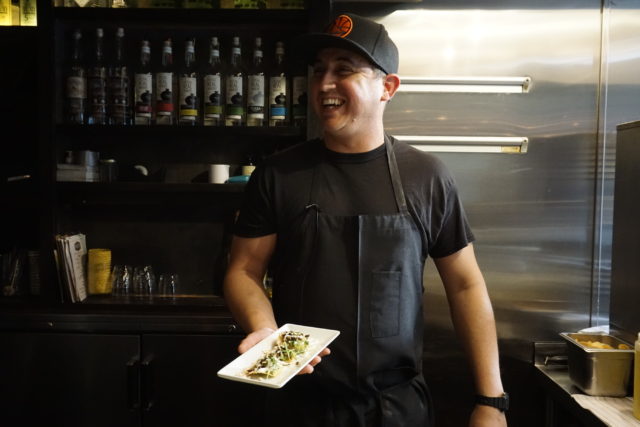 The bar is dimly lit and the music is loud. The ceiling is decorated with hundreds of empty beer glasses placed vertically next to each other to show the labels. The shelves behind the counter carry bottle after bottle of tequila and mezcal.

Mosto Bar doesn’t have many tables, but the ones they have are occupied by men and women imbibing in colorful drinks. At first glance, it looks like just another tequila bar with an assortment Mexican dishes on the menu. But upon taking a closer look, some see-through plastic boxes in the kitchen reveal the unusual ingredients of two of their dishes – insects.

Mosto Bar serves spicy mealworms and cricket tostadas – one of the only places in San Francisco to do so.

As the population of the world increases every year, so does the necessity of more food, which will put more pressure on the environment. However, eating insects can be part of the solution.

Edible insects contain a lot of protein, vitamins, and amino acids. Crickets contain sixty percent protein compared to steak, which contains about thirty percent.  According to the Food and Agriculture Organization of the United Nations crickets need six times less feed than cattle, four times less than sheep, and two times less than pigs and chickens to produce the same amount of protein.

Andrew Brentano, founder and CEO of Tiny Farms breeds and distributes crickets in Oakland. His small, modern type of farm can currently produce hundreds of pounds of crickets per week. It all started five years ago when he and his wife decided to try insects for the first time. They basically went out in their garden, caught a few grasshoppers and in their kitchen, wrapped them in bacon and fried them up.

Since that day they have developed their successful cricket farm. Today, they sell their crickets to restaurants and companies that use them in their cooking and products.

However, it is fully possible to breed crickets in your own home.

Brentano explains how you can buy live crickets in a pet store and keep them in a box with egg cartons. The insects will eat just about anything – some vegetables or chicken feed will do. When they are grown you simply put them in the freezer and they can be used for cooking. 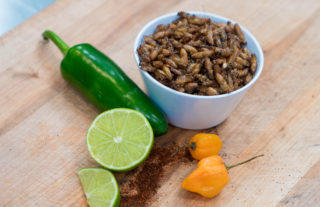 Back in Mosto Bar, 35-year-old culinary director Quinten Frye opens the plastic boxes containing the dead insects. He pours the mealworms in a small ceramic bowl. The fried crickets are lined up on three small corn tortillas with guacamole, cilantro, and sour cream. They look like a miniature version of regular tostadas. Since the crickets are both fried and seasoned, it is hard to tell what they really look like. But if you look close you can see their tiny legs sticking out from their bodies.

Frye first started cooking with insects eight years ago when he visited Oaxaca in Mexico. Since then he’s been experimenting with them in different dishes and salsas.

“The insects are becoming more popular on the menu. I think people are excited to learn more about them and try something out of the ordinary,” he says.

On the high-top chairs by the window, two students from San Francisco State University are waiting to try edible insects for the first time. Marike Duckstein a, 21-year-old psychology major, and 20-year-old BECA major Sabrina Mora are a little nervous, but mostly excited.

“I think the crickets are gonna be crunchy,” Mora says.

“I don’t know what it will taste like. Maybe chicken?”

The girls go for the bowl of spicy mealworms first. You can hear the crunching as Mora and Duckstein put their teeth in the crispy cricket bodies.

“They’re good, kind of salty,” Mora exclaims while grabbing a second one.

Next up are the tostadas. The brownish crickets are almost hidden under the sour cream and guacamole. The students admire the small, delicate dish before digging in.

“The mealworms were way scarier than the tostadas. They’re so small and cute,” Mora laughs.

“If you stop thinking about what you’re eating it tastes good,” Duckstein says.

The students finish all three of the tostadas and seem pleased with their meal. They both prefer the cricket tostadas over the crunchy mealworms.

“I think people have an idea in their head that bugs are gross or creepy but most of the time people try them, they are pleasantly surprised,” Frye explains.

He hopes bugs can be more normalized as food in the future.

Cricket distributor Andrew Brentano also thinks education is key. People don’t know how to cook with bugs and that’s what has to change.

“Most people warm up to the idea once they have tried it,” Brentano says.

Even though more and more people, and restaurants, are welcoming insects into their lives, it will probably take some time before we include them in our regular diets, like in other parts of the world.

Eating insects, or entomophagy, is an old tradition. The ancient Romans and Greeks ate them. People in Africa, Asia and Latin America still do, but in Europe and North America it is not as usual. According to The National Geographic, one reason for that is that after Europe became agrarian, insects were seen as destroyers of crops rather than a source of food.

Changing culture can’t happen overnight, but saying yes to bugs would pay off in the long run. After all, bugs just might be the food of the future.