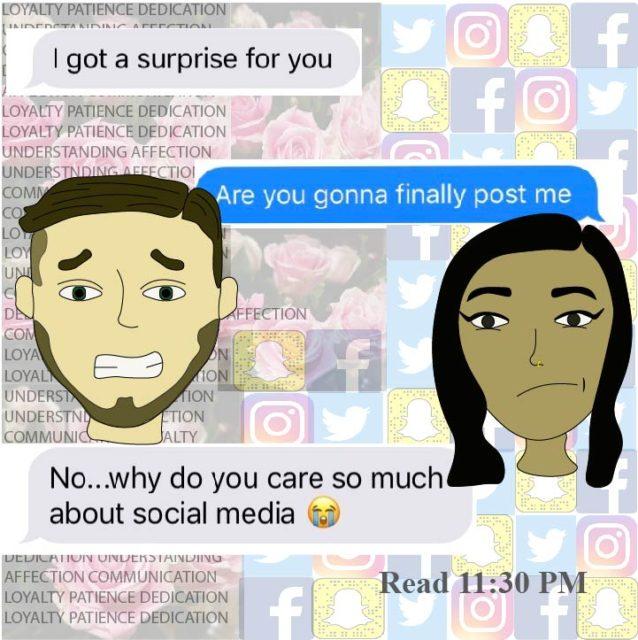 We’ve all been there. Either you’re the friend asking, or you’re the one being asked, “Do they post about you?” It seems like social media is hitting closer and closer to relationships, when it used to be just outlets to keep in touch with those you know. Some think posting about their significant other is very important, it shows they care, they love you, and that they’re proud of you. On the other hand, there are those that like to keep their lives and whereabouts private. But who’s right?

“It depends on the different people’s personality, their privacy level, and how comfortable they are sharing information about their lives,” says San Francisco State University sex and relationships instructor, Ivy Chen.

Ah, of course, one of those, “it depends,” answers.

But it’s true, it really depends on the individual posting. Linda Bernstein, Social Media Strategist and Journalism professor at Long Island University, Brooklyn, said that she has heard many instances of couples being upset about posting. She has found that when the other partner in the relationship doesn’t reciprocate, they tend to get upset because they feel like posting should be equal.

Some may be thinking, “But is it really that serious?” According to Bernstein, yes! About six years ago, Bernstein heard of a couple that was going through a divorce. When the couple got together to sign the divorce papers, they had arranged with the lawyers that they would change their relationship status on Facebook to “single” at the exact same time.

“People are what they are, and social media is just another outlet for people to act, or not act in a certain way,” Bernstein explained.

SF State University alumni, Jan Jerome Ochoa, and his girlfriend, Maria Elena Urquico, have been together for about two years. It took Ochoa almost one year into the relationship to post about his girlfriend on any social media platform, and it bothered her. Ochoa prefers to be more private, and doesn’t think posting about his whereabouts are that important. Still, Urquico encourages her boyfriend to occasionally post about her.

Ochoa goes further to say that he wouldn’t mind one bit if Urquico didn’t post about him at all. He believes that at the end of the day, he’s the one she is constantly in contact with, and wouldn’t question her motives or feelings for him off of some posts.

“Whatever she would want me to post, like a special moment to me, or a special memory between the both of us, I don’t really need it to be put out to everyone else to see,” Ochoa said. “I personally like to be much more private about it.”

Ochoa admits that posting on social media has caused some bickering between the two. This is because Urquico believes that posting about your significant other on your social media does have some validation behind it, but also knows that words speak louder than a post.

“It’s a way for your significant other to show you off, to show that they care,” Urquico said. “It doesn’t have to be frequent, but it would be nice every now and then that we could have a memory somewhere out there in the virtual world.”

Urquico argues that yes, girls post a lot more than guys, but whatever males do post, it must mean something to them since they tend to post less frequently. Ivy Chen has found that generally, more people who identify as women tend to have larger social networks, whether it be online, or a larger group of friends in real life. They also tend to be more in regular contact with their friends and family.

According to Chen, what’s common for a straight male is to maybe have a couple of close friends. In most cases, his romantic partner makes up a big part of how he connects emotionally. Men tend to look at what’s going on in real life with their romantic partner, and when they see that is going fine, they don’t feel a need to advertise it on social media.

SF State alumni, Angelica “Giee” Lapid, posts about her girlfriend frequently, but says she would respect her girlfriend’s wishes if she didn’t want to be so public with their relationship. In terms of being in a LGBTQ relationship versus a heterosexual relationship, Lapid says she doesn’t really see a difference in posting. Pretty much all couples, whether heterosexual or LGBTQ, post about their significant others almost the same.

But if they’re not posting about you, how do you know when to get a little suspicious? There’s a difference between being private and keeping the relationship a secret. Some get insecure when they aren’t on their partner’s social media, and tend to believe the worse and jump to conclusions. It can have people guessing if their partner is as committed as they are.

Chen suggests that the individual assuming should look for alarming signs. If they claim to be private but they’re posting about every single thing throughout the day, she believes this might be a red flag. A good way to determine if you’re being kept a secret is to evaluate how the relationship is. Chen believes you should take these things into consideration: do you hang out in public? Have you met their parents or friends? Do they make you feel validated and reassured in real life?

“If you’ve gotten a chance to meet your partner’s friends, and they know you exist, and they seem to be really proud of you, and not like they’re hiding you, I feel like those are better signs of how they feel about you and the relationship, rather than how much they post online,” Chen says confidently.

In fact, Chen believes that if a person in a relationship is constantly needing proof that their partner cares about them through social media, it may be a red flag that there is something else wrong. Chen has been teaching at SF State for fifteen years, and has found that needing constant external validation may be a sign that the issue might be with the individual person, rather than with the relationship.

SF State student, Adrian Cuyson, knows that social media is not an accurate representation of what goes on in real life. He posts about his girlfriend, but tries to post in a different way. Cuyson prefers to write appreciation posts dedicated to his girlfriend every now and then. He thinks they are more meaningful and serve a purpose. But at the end of the day, Cuyson knows that the amount of pictures you post doesn’t measure the amount of love you have for someone else.

“It’s cool, it’s a nice gesture, and I appreciate it, but it’s something that shouldn’t be used as a crutch in a relationship,” Cuyson said.

On the flip side, there are those that post “too much” about their significant other. Chen stresses that the primary person who needs to hear “I love you,” is your partner. And sometimes people don’t realize that posting too much and showing how happy they perceive to be in real life can get a little annoying to their followers. It almost seems like people post to get validation from others and are fishing for compliments.

Posting about your significant other is a nice gesture, however, it isn’t something that needs to be done. If the relationship is going well and you feel validated in real life, social media shouldn’t be a factor.

“As long as they realize their relationship is good, healthy, mutually supportive, and that their partner is as committed as they are, why do they need to tell the rest of the world?” Chen said. “It doesn’t have to be a problem.”