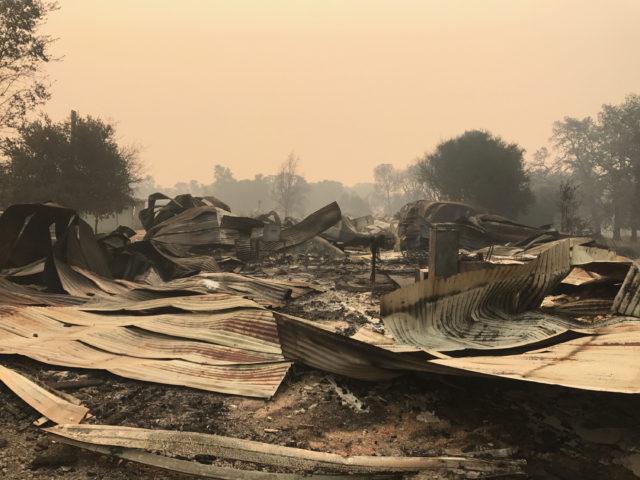 The aftermath of the fires

Since the devastating fires that started on a dry, windy night  in Northern California, more than forty people have lost their lives, over five thousand structures have been destroyed, and several hundred thousand acres of land have burned down, according to Cal Fire. The disaster will go into history as one of the worst fires in California’s history. Businesses both in San Francisco and up North have been seriously affected by the devastation, and unknown consequences might occur in the future.

Weed up in smoke

“The county felt like a war zone,” Sarah ElSayed says. She works for Legion of Bloom, which produces and distributes sun-grown marijuana in Sonoma.

“A thick haze of smoke was choking the air and we had nightly curfews. Our city was almost unrecognizable,” she continues.

Santa Rosa lost over fifteen hundred homes and structures within the first three hours of the fire. Many people made it safely out of their homes and neighborhoods just before the blazing inferno blew through the area. The entire county shut down for a week as everyone held their breath waiting to see how bad it would get. Entire neighborhoods were leveled to the ground, businesses were destroyed, and people lost everything.

As far as the Cannabis community is concerned, there are several farmers who shared the same fate as others. According to the Sonoma County Growers Association, thirty pot farms have suffered severe damage. Cannabis farmers are also dealing with the crippling effects of not having the adequate insurance necessary to safeguard their businesses.

SPARC, a San Francisco-based medical cannabis dispensary, was heavily affected. Founder Erich Pearson told the Green State that he went to bed on the first night of the fires thinking “at minimum the plants are going to be trashed and greenhouse plastic is going to be everywhere.”  In reality, sixty thousand square feet of barns filled with cannabis were destroyed, along with SPARC Farm’s drying room and processing room, and living space for ten people.

One of Legion of Bloom’s main farms has been severely affected by the Nuns Fire in the eastern side of the county. The fire destroyed much of their infrastructure and incinerated a good portion of their crop, leaving the rest with varying degrees of smoke damage.

“We are still trying to quantify our total losses, as we pick up the pieces and try to save what we can of our farm,” ElSayed explains.

ElSayed thinks the North Bay will see a slight decline in sun-grown flower because of the fires. However, she thinks it is too early to see the total scope of loss.

“I imagine that there will be a ripple effect in the market as we start to fully understand what this may have done to the overall supply chain,” she says.

Hezekiah Allen, executive director of the California Growers Association, told KTLA that the road to recovery is going to be very long. However, he does not think the marijuana dispensaries will have a hard time getting supply because there are so many farms. In California there are more than fifty thousand marijuana farms, and fifteen thousand of these are located in Sonoma County.

“Although this has been devastating for Sonoma County,” ElSayed adds, “it has been beautiful and inspiring to see our community stand strong and rally together. We are very proud to call Sonoma County our home.”

Sift Dessert Bar is a dessert shop with stores in San Francisco, Napa, and Santa Rosa. Their main bakery in Santa Rosa was next door to a building that burnt to the ground.

“We were all on the edge of our seat to see if Sift was still standing at the end of that day,” Andrea Ballus, CEO and founder of Sift, says.

When they were finally able to assess the bakery, they needed a major cleaning inside because the building was so close to the fire. Sift had to close four of their five stores in the Napa/Sonoma-area for two weeks due to the damage. Over thirty percent of their sixty employees were mandatorily evacuated. Despite the damage the dessert chain still managed to keep their employees paid.

“I overheard one of our long-time employees say, ‘That was the worst paid vacation I’ve ever had’,” Ballus recalls.

Most of the Sift stores are located in heavy tourist-driven areas, which means that the customer flow has slowed down after the fires, but it is getting better with time.

“For the most part, you won’t even see the burned areas when coming to visit wine country!”

Though Sift has lost money, the CEO is more concerned about the personal losses than the material damage to their bakery.

“We all personally know someone who’s house burned down,” Ballus explains. “That has been the biggest tragedy – helping your friends put back their lives, after suffering so much at the hands of this fire.”

The wine industry definitely suffered damage due to the fires. According to the OC Register, twenty-seven wineries were destroyed or damaged. With that being said, Napa and Sonoma have roughly nineteen hundred licensed wineries and cellars.

“The image that the wine industry has been destroyed has been overblown,” says Dr. Joe LaVilla, restaurant management instructor and sommelier at San Francisco State University.

LaVilla explains how most of what burned were oak trees between vineyards. The vines themselves acted as a fire break for a few wineries. The smoke could have tainted much of the production, but most of harvest had already been completed.

“Only about fifteen percent of the harvest remained, so the damage from smoke will likely be minimal,” LaVilla adds.

Though only some wineries were seriously damaged, the consequences for those affected can be brutal. The wineries that were destroyed have to start from scratch. If they were fermenting at the time of the fire, had grapes ready to ferment, or had wine about to be put into barrels, that part of their production could be destroyed and will leave a gap in their inventory for a year. The fermentation process in winemaking is when juice from the pressed grapes, containing natural sugars, in combination with yeasts present on the skins of the grape are turned to alcohol. This process can take anywhere from ten days to months. While most of the harvest was completed before the fires started, as little as thirty minutes of exposure to smoke can cause a smoke-taint in the final product.

If any wine was stored on site for aging, and that was lost, then the gap in production could be longer. If they lost the whole production of 2017, the consequences are in the future because wine is not usually sold immediately after it is made.

“Visitors who are staying away because they believe the area is devastated, are doing more damage than the fire did,” LaVilla points out.

LaVilla thinks restaurants and wine shops in San Francisco might see a depletion in inventory for some wines.

“There may be a lack of the 2017 vintage in the future, but it remains to be seen how large it will be,” he adds.

Frank Melis, wine expert and owner of Golden Gate Wine Cellars in San Francisco, says that supply was an issue the first two to three weeks, because some of the wineries he works with burned down. However, he is not worried about the wine supply in San Francisco in general.

“I don’t believe it will be an issue,” Melis explains. “Ninety nine percent of the vineyards were not damaged. It could have been much worse.”

If you are worried about the wine prices, you can most likely relax. The 2017 vintage may be higher priced because of its scarcity, but for the most part, there should not be a sudden surge in pricing, according to LaVilla.

The consumers play an important role in helping damaged wineries get back on their feet.

“Take a day trip and go to restaurants, shops, and wineries for tastings,” LaVilla explains.

“Spending money in the local economy will get people back on their feet faster, because they are earning an income and can then work to rebuild their lives.”

Though local businesses in Napa and Sonoma have suffered severe damage, the people behind remain hopeful. The fire inferno has gotten people closer than ever and showed us how important it is to stand together through a disaster. It might take a while for them to get back on their feet, but they will stand again.

Photos by Legion of Bloom