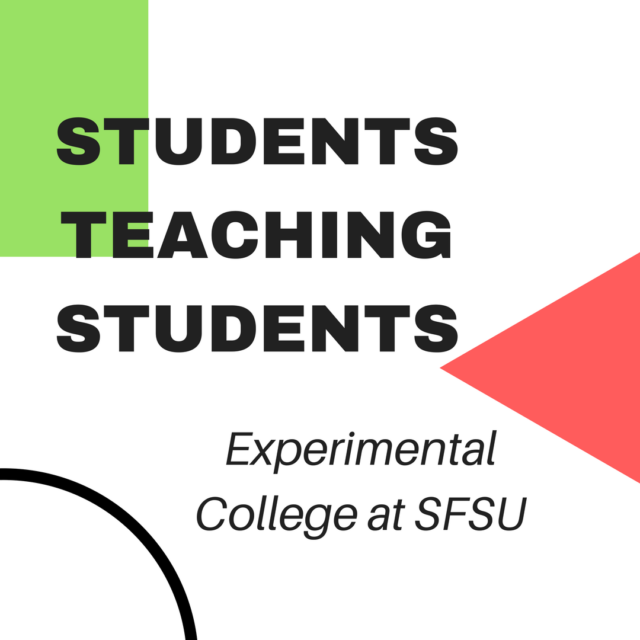 The halls of San Francisco State University’s Humanities building boast a vibrant, multicolored bulletin nested next to Room 302—a relic of the university’s rich history. The psychedelic tones of muted blues, pinks, and yellows call back to a different time; a time of social upheaval, free thought, challenging the status quo, and experimentation. The bulletin reads, in big letters: ‘Experimental College.’

“The students in the sixties were looking to understand themselves better,” says Kathy Emery, her small frame tucked into an office chair, legs crossed, intense eyes peering out from under silver tufts of hair and half-rimmed eyeglasses.

Room 302, her office, is almost vibrating behind her with the din of heated discourse between students. Somewhere mid-conversation she snaps back in her revolving chair—“when did this become a pub?” The room goes silent for a beat—“I guess so” one student chuckles, and the din resumes. Some of these students teach their own classes at San Francisco State. Some of them are in their early twenties.

She turns back and finishes, “it’s incredible. I’ve never seen it so busy,” she says, her slight grin betraying a sense of faux irritation. She enjoys it.

“Students were reacting to the social movement [of the sixties].” Kathy, a political science lecturer, is referring to the San Francisco State University strike of 1968.

“One of the demands was to create the ethnic studies, and that came out of their experience with ExCo.”

In November of 1968, the Third World Liberation Front, an amalgam of various minority groups on campus (including the Black Students Union, the Latin American Students Organization, and the Filipino-American Students Union) made national news by staging a five-month long strike, marked by clashes with police and civil strife on both sides, to protest the lack of representation in the curriculum on the university campus. The battle established the campus’s College of Ethnic Studies as we know it today.

The Experimental College, or “ExCo,” in its original incarnation was created and funded by students of SF State in 1965 with one radical idea in mind: a free education designed by the students, for the students.  In what was a essentially a student-run micro-university within the university, students could design and teach other students anything they felt was lacking in the college’s curriculum. It was a platform for innovation and experimentation.

This past semester saw the revival of ExCO, a four-class pilot program designed by Kathy in tandem with SF State Sociology Professor Christopher Bettinger—who found an ad for the program put out by Kathy’s students on Craigslist—and Trevor Getz, the Chair of the History department on campus. The four classes being offered this semester included: a class on Noam Chomsky, a class analyzing the Syrian refugee crisis, a class on cybersecurity, and a class on social movements and digital technology. All classes grant an accredited unit to those who enroll, and were designed and taught by student teachers.

“What students need to learn about is not necessarily what teachers want to teach or what the academy thinks should be taught.” Kathy says.

“A lot of what’s being taught is taught in a way that’s inaccessible to the students in the class and the students can make it accessible.”

The idea is known as progressive pedagogy—that it is not what is being taught, but how it is being taught—or the idea that “student interest should drive the curriculum,” according to Kathy.

“You can use the platform for anything. You can teach funk music, math, etc. It’s a big experiment” says 32-year-old Political Science Major Raymond Larios.

Larios taught “Cybersecurity, World Affairs & Social Implications in the Digital World” this semester, a 1-unit class that he designed himself based on his research and reaction to the hacking of the 2016 American presidential election.

“The offerings here at SF State are very minimal. Since there weren’t a whole lot of offerings, I made this class [and] used the ExCo platform to offer students who were interested in [national security] studies.”

We’re sitting on wooden benches made out of tree stumps, outside of the Business building on campus, where Raymond teaches a class of five students, all minoring in international relations. Their ages range from 20 to 60 and over, according to Raymond.

Raymond explains the process of applying for your own class, from the inception of an idea, to the “on-boarding” process to prep and vet potential student professors. “I taught myself. I did my research, I read books, looked for media materials, teaching techniques…and brought this class to the platform.”

The application process begins in  Kathy Emery’s class, “The Politics of Pedagogy,” where students are required to teach other students and learn the ins and outs of teaching. After, the applicant submits a writing sample, syllabus, and a letter elaborating on the “why and how.” After a thorough vetting process, in adherence with the program’s mission statement, the class is accredited and given the green light.

“It looks like any other class and it doesn’t at the same time,” Raymond explains.

“For me the biggest change from a traditional class is that in ExCo students play a bigger role in shaping what we’re going to be learning about.”

Through the ExCo program Drobnick could theoretically apply for his own class next semester. “I could definitely see myself teaching in the Experimental College in the future. I really like the idea of just having those dialogues with students. I’ve done tutoring with students before and I just see this as a scaled-up version of that.”

Esvin Diaz, a 21-year-old international relations minor, is also in Raymond’s class. He shares a similar experience with Drobnick. “Both my experiences with community college and in SF State have been similar where teachers control what we’re going to be learning. In ExCo you are able to contribute more than you are in other classes.”

Other students are using the ExCo platform in different ways. Alisar Mustafa, a political science major in her early twenties, taught a class on the Syrian Refugee Crisis this semester. Mustafa lived the first fourteen years of her life in Syria and called the ExCo program the “perfect opportunity to educate people about the Syrian Refugee Crisis. She said “I believe education is the first step to combat ignorance and suggest solutions to the issue.”

Mustafa opened up about the challenges of teaching her own class. “The hardest part was that my topic was very dense and complicated. Many times I did not know the answer to very intricate questions. However, I found myself learning so much more in depth about the topic because I had to find answers to all these questions which further illustrates how ExCo serves both the learning of the educator and the students.”

She finished “ExCo destroys the imaginary wall we, as students, have between us and the education system. The wall of the ‘can’t dos,’ the ‘I’m not qualified,’ and the ‘I don’t have the credentials.’”

Kathy has made a career based on the shortcomings of the educational system and alternative methods of teaching. With a BA in History from Mt. Holyoke College, an all-female liberal arts college in Massachusetts, and a PhD in Education from UC Davis, Kathy came to SF State in 2007, inspired by the idea of the Mississippi Freedom Schools, whose goal was to “create active agents of social change”. She created a class called “The Politics of Pedagogy” based on the university’s archives of the Experimental College of the sixties and the California Labor School’s archives. Students in her class wanted to design their own freedom schools, but the program never formally gained “traction” she explains, as it “wasn’t the right time.”

However, there are certain issues the ExCo platform may have to deal with in the future.

“I was thinking the other day, what if i wanted to teach a class on growing cannabis? It would be problematic.” Raymond says.

Schools funded through federal money would have to grapple with that, but Kathy rejected the notion, saying that it would be up to the university to decide, as with any other issue.

Raymond also explained that some professors had been “a little negative in their approach [to ExCo],” but clarified “I have no accreditation to teach, so I don’t purport to do what teachers here who got a PhD or a Masters do. On the contrary, I’m just using everything I’ve learned and facilitating it to others.”

Kathy responded “it challenges the idea of what a teacher is.” She continued “I see it as supplementary. The way teachers teach here is very different form the way students will teach. It’s not competition. It’s different. The university, by its nature doesn’t respond quickly to what’s going on in society. That’s the problem with getting a PhD: by the time you get it the world has changed.”

Kathy explained her process and the potential pitfalls of the ExCo program. “I embed students teaching other students in my class in a small way. I’m there in the classroom teaching them how to teach each other and not just throwing someone into a classroom and saying ‘teach’ without having any experience.”

She concluded “they need structural support while they teach. They’re going to have problems in their classes and they need someone experienced to talk to. it remains to be seen if I can get enough structural support set up for them next semester so that it’ll be successful.”

Raymond summed up the program by saying “here the students have come and taught themselves something but at the same time have made a change to the institution.”

Some of the ExCo classes—among the twenty-four— being offered next semester include “Antifascist History and Tactics,” “Conspiracies! Overtly Covert,” “Funk! A Revolutionary State of Mind,” “A History of Activism in Sports: From Jackie Robinson to Colin Kaepernick,” and “How to Relationship 101: Love and Intersectionality.”