The Myths of the Pit 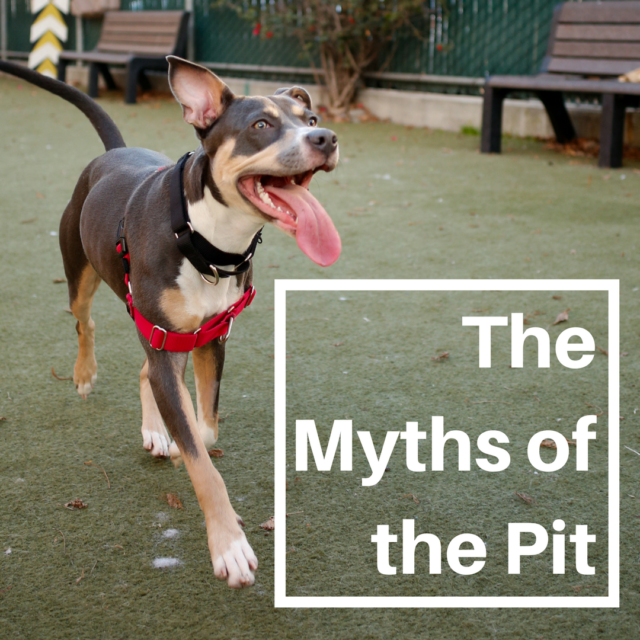 A wide jaw, stocky build, and short thick hair in an array of colors. The defining features of a pit bull aren’t up for debate when it comes to this dog breed. Behavior on the other hand, never seems to stop being a controversy. Extreme efforts go into painting the picture of a vicious beast, rabid and uncontrollable in any situation. The other side reveals a loyal and loving dog, reacting the way any dog would if put in a bad situation raised by unfit owners. But what depiction holds truth in reality?

When approaching any controversy, education is key. First and foremost, what is a pit bull? Ariana Luchsinger, from San Francisco Animal Care & Control, thinks most people identify a pit bull as just a “well-muscled with a blocky head” dog, but that doesn’t always add up to a pit bull-type breed.

“‘Pit bull’ is really an umbrella term for multiple breeds of dog – Staffies [Staffordshire Terriers], American Bulldogs, Pit Bull Terrier – and as a term is overused and in shelters is overidentified,” said Ariana. “Unfortunately, people get a lot of misinformation about dogs in general, and pit bull-type dogs are the biggest victim of these mythologies.”

The generalization of pit bulls is based around decades of bad-breeders and their actions; over-breeding, improper training, or training to specifically make them aggressive.

“The public often views pitties as aggressive killing machines with a higher likelihood of biting,” Ariana declared. “In truth, they are like any dog; a product of their genetics, their socialization, and their environment.”

Jennifer Rosen, founder of the dog rescue Bullies and Buddies in Redondo Beach, California, agrees that it’s all about the breeders and owners, and that these dogs are a product of bad-nurture rather than the nature in their genetics.

“What’s happening is people are using them as guard dogs and chaining them up,” Jennifer preached as she boomed about a breed she’s loved since she first rescued a pit bull in 2004. “You have a working breed that has a lot of energy and they are sitting there tied up or in a backyard, that’s a problem. It’s really on us as the owners; how we raise our dogs. If we exercise them, socialize them, give them some boundaries, there should be no issues.”

A complicated process is implemented at Bullies and Buddies in making sure an owner is the right fit and ready for owning a pit bull including applications, home visits, and visits with their trainer at the rescue. Jennifer understands what can happen if a pit bull is given into the wrong hands, and does everything she can to prevent that.

“When they come to me, you know they fill out an application and I see what their lifestyle is, I’ll tell people this is not the breed for you,” Jennifer said with conviction, and added that her answer sometimes turns people off, but she’d rather turn away an applicant than have a pittie end up in a non ideal situation and continue to perpetuate myths.

Environment and caregiving is everything in this circumstance. Not just for the individual dog itself, but also for the public. Every pit bull that gets treated wrong becomes another statistic for those wishing to ban the breed entirely.

“Your dog has to be an exemplary ambassador because the breed itself can’t afford him not to be – and that’s a huge and unfair responsibility,” insisted Ariana as she spoke about a time a woman had to cancel her adoption because her mom threatened to literally disown her if she owned a pit bull.

“In addition to being a baseline good dog-owner, you have to be willing to demystify your dog to everyone from passers-by to your neighbor, to your family. The public will forgive and forget the trespasses of a Goldendoodle, [but] they will never forgive the same behaviors in a pit bull.”

The American Temperament Test Society is a national organization designed to test the various temperaments of dog breeds.

“The test takes about 12 minutes to complete,” according to the organization’s official website. “The dog is on a loose six-foot lead and three ATTS trained evaluators score the dog. Majority rules. Failure on any part of the test is recognized when a dog shows panic, strong avoidance without recovery or unprovoked aggression.”

But their stocky and muscular demeanor is threatening to those in fear of pitties. Before ever even coming into contact with one, most people on this side of the argument have their mind made up that pit bulls are not to be trusted. Ruth Matias, a junior at San Francisco State University, said she isn’t very fearful of the breed. Her mom on the other hand, is terrified.

“My mom is scared of pit bulls because back in Ethiopia, dogs are guard-dogs, not domesticated house pets,” Ruth explained, elaborating that her mother emigrated to America from Ethiopia. “So whenever she sees [pit bulls] they still instill fear in her. They’re not animals she’d want to go up and pet.”

Pit bulls are at the top of the list for dog-bites in California at 29 percent, right above German Shepherds and Chihuahuas according to the California Department of Public Health. These bites are reported and recorded. The breed of the dog is either claimed to be a pit bull by the victim or by a visual identification from veterinarians and staff at a shelter. In 2015, The Veterinary Journal studied the identifications of pit bulls by shelter staff versus DNA testing of the dog confirming the breed.

“At any given time, SFACC’s dog population is roughly 30 percent pit bull-type dogs, the majority of which are found as unaltered strays,” she said, emphasizing that unaltered means not spayed or neutered, which is the other huge problem that involves the breed.

“Despite a ton of progress in the realms of public awareness and spay / neuter, pitties are a population that is favored for illegitimate backyard breeding,” Ariana declared, revealing the reason why there are so many pit bulls in shelters and rescues: greedy breeders not spaying or neutering pitties in an attempt to make more money. There are many laws throughout the country that specifically require pit bull-type dogs to be neutered or spayed in order to stop this problem.

San Francisco code 43 section 1 states: “no person may own, keep, or harbor any dog within the City and County of San Francisco that the person in possession knew, or should have known, was a pit bull that has not been spayed or neutered.”

Ignorant breeders break the law, which leads to pit bulls without homes, being found on the street, and hopefully being found by a shelter or rescue before it’s too late for them.

“People are breeding them and trying to make a profit,” Jennifer added, agreeing that the biggest issue here is overpopulation. “Now it’s like they’re a dime a dozen. They are getting euthanized left and right in shelters. Spay and neuter. That’s the problem.”

With more pitties starting out with bad breeders or incapable owners and without proper altering, the stigma behind them just continues. Jennifer finds passion in educating the public on the “other-side of the pit bull story,” knowing that the future for these pups will be bright one day if people are willing to learn what is fact and what is fiction.

“The bottom line is, each dog is an individual,” Jennifer stated, still knowing that some people’s minds may never change. “You know, what I’ve learned is that you can’t fix stupid. It is a privilege to own this breed. I am so proud everyday.”