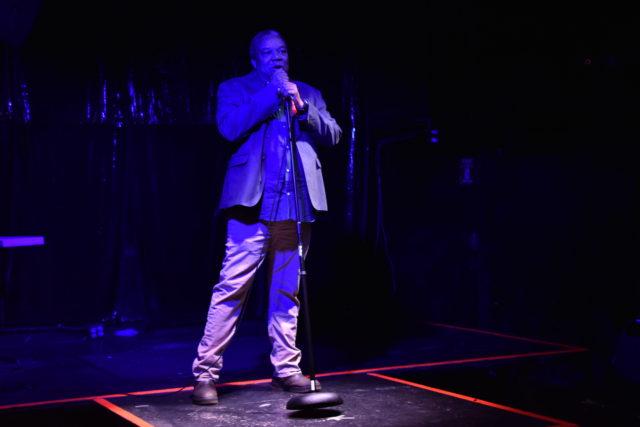 “Humans! Listen to my face hole!”

Tony Sparks has been on stage long enough to know how to capture attention. He stands behind the mic at a sparsely occupied bar on a Monday night. He is two acts into an open mic show.

“Hey, humans!” Sparks shouts from inside the spotlight. “Even y’all in the back at the bar, ignoring the shit outta me. I need for everybody to give this next guy the big love.”

Sparks hands it off to the next comic. Slowly, people are drawn in. The bar fills up. Some people even come to sit around the stage. Two hours later, just before the show ends, the place is hopping.

Sparks is known as the “godfather of comedy” in San Francisco. He has run comedy events throughout the Bay Area for years. He came to San Francisco in the early 1990s, enticed by the city’s reputation as a nucleus of the comedy scene. Instead, he found himself ostracized from the prominent clubs and people of the day.

“This town was a piece of shit,” Sparks says. “It was really cliquey. So I don’t ever want to be that way with people. Hopefully when people hang out with me they get a sense of, ‘okay, I feel accepted and I can do this.’ I don’t want to do to other people what was done to me.”

Sparks set out to develop a more welcoming community of comics. In April of 1999, Sparks started hosting shows at BrainWash cafe and laundromat in South of Market. Calling the place an eclectic venue would not do it justice. The stage was set up against the huge, wall-high windows of the front of the building. The food line cut right through the tables, so most of the audience was separated from the direct vicinity of the stage. People usually talked at the bar, ignoring the show completely. And people were also there to do their laundry.

Over the years, the strange hybrid establishment became a fixture of Bay Area comedy. BrainWash held open mics five nights a week, most hosted by Sparks.

“It was a great place. It was the foundation for the community,” Sparks explains. “If you needed to know what to do, and to grow, and where to go, you went to the Brainwash. The staff there was wonderful, the people were nice. They really took good care of me. It was like my family. I mean, c’mon, I spent nineteen years with them.”

In December 2017, BrainWash abruptly shut down. The cafe had been struggling to deal with a decline of customers caused by a large construction project next door. It closed with no fanfare, just a note on the locked door. It had been in business for more than thirty years.

The comedy community has been reeling ever since. There are other places that hold open mics in the city, of course, but none of them with the frequency that BrainWash did. Stoehr and other comedians describe the scene as “decentralized.”

“There was a huge gap, a void that opened up once BrainWash shut down,” Billy Catechi, manager of the bar Il Pirata, says. “That was a real shame. The place was one-of-a-kind.”

For the past twelve years, Il Pirata hosted monthly stand up shows. After BrainWash closed, said Catechi, Il Pirata decided to turn their monthly shows into weekly events. They asked Tony Sparks to host. The shows have been running every Thursday since early February.

Il Pirata sits on the corner of 16th Street and Potrero Avenue. Around 5 p.m. on a Thursday evening, Catechi brings a couple rows of chairs into the cleared-out lounge space and assembles a short wooden stage. In the room are several large booths, a spotlight, and a sound station with mixing boards and a big bank of speakers. This is the setup for the evening showcase of more established Bay Area comedians, which starts at 8 p.m.

Until then, there’s open mic out on the patio. The prep work for this event is less elaborate. Catechi pulls one table back a couple feet then plops a mic and speaker in front of the Jack Daniels dartboard. Mere feet away, traffic barrels by on 16th Street.

One-by-one, the comics come in and sign up for their four minutes behind the mic. Everyone who performs that night is a veteran of the process. Many of them know one another from the BrainWash. They mingle out on the patio until Sparks arrives just before six o’clock to kick the night off.

In addition to Il Pirata, Sparks also hosts a regular Monday night show (along with free pizza and videogames) at Milk Bar on Haight Street. The gigs he runs now don’t come close to matching the sense of camaraderie of BrainWash. Still, he continues to host shows, passionate about preserving venues for burgeoning comics to perform.

An open mic can be a brutal thing. A show is the only place for an aspiring comedian to hone new material. So they go out on a weekday night and try out their budding jokes in front of an audience made up mostly, if not entirely, of fellow comedians.

“There’s a lot of open mics where there’s no audience, there’s just other comics who have already seen most of your jokes,” comedian Travis Thielen shares. “And you only have a couple new things, so it can feel kind of disheartening.”

At Il Pirata, some do better than others. One comic’s tale about hiding pot from his parents as an adult garners some earnest chuckles, while another’s rant about millenials falls flat. Admittedly, the latter scenario is more common.

This is why the geniality of Tony Sparks is such a key to the success of the night. Even when he delves into darker personal topics, there is a buoyancy to him. Sparks has a way of delivering jabs that feel like both a roast and encouragement.

During a recent show at Milk Bar, Sparks addressed a comic who had just performed a set that was met with silence from the audience. The main factor for the icy response, perhaps, was a complete lack of discernible jokes anywhere in the routine.

“That was beautiful, although I didn’t understand shit you was saying,” Sparks said as he took back the mic. “Don’t feel bad. The rest of them,” he gestured toward the audience, “they were ignoring you very openly.” Then he turned on the audience: “You guys are bullies. He poured his heart out and you shit all over him.”

The ribbing is anything but discouraging. Comedian Tammy Clarke works at open mics and with Sparks to hone her craft. In August she will be opening for shows headlined by comedian and actress Mo’Nique.

“Honestly, I’ve gotten nothing, but love and support in this comedy sector,” Clarke says. “It feels good.”

The moment each comedian finishes their set, Sparks belts out an enthusiastic “Yaaaay!” and prods the room to break into another round of applause. When a brand-new comic comes up, Sparks leads the audience in a short chant of “lots of love” to build up the energy in the room.

“Sometimes there’s one thing that you do in life that just makes you so fucking happy,” Sparks explains. “When I host these shows, or when I get on stage, I’m so happy. I’m so incredibly happy. I have so much fun.”

Still, there’s no filling in the hole that the loss of the BrainWash created in Sparks’s life. His discontent about living in San Francisco hasn’t abated in the nearly three decades of his residency.

“I don’t trust the city, I don’t like it,” Sparks admits. “I don’t like the people. I hate everything about it. Everything. The only thing I loved about it is gone; that was the BrainWash.”

Sparks says he has gotten invitations from venues in other cities to go create his own BrainWash-type establishment. Still, there is something that, for now, keeps him in San Francisco.

As the open mic wraps up at Il Pirata, Sparks thanks everyone for coming out and congratulates them on their performances. Then he goes inside, hops up on the stage, and launches into his next comedy showcase.