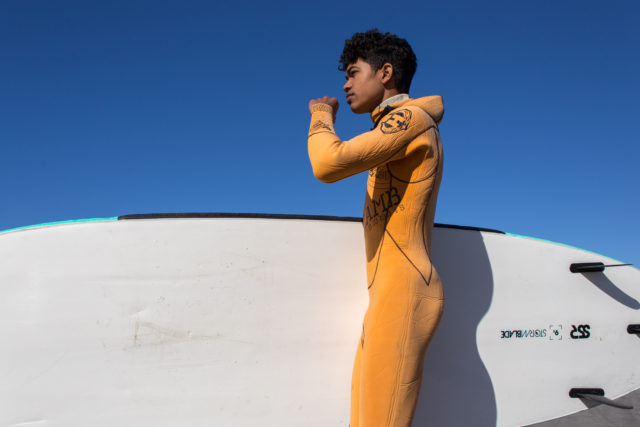 It was the coldest day of the year in San Francisco. A low pressure system off the coast sent frigid winds and dismal surfing conditions to the shores of Linda Mar beach in Pacifica, California.

In the parking lot, older surfers declare victory-at-sea from the confines of their cars. Many will retreat home with the heater dial turned all the way up.  The waves whimper in the stiff northwest breeze. “Hardly worth a paddle,” a local mutters to his friend.

A van pulls into the lot with surfboards stacked towards the heavens. It is the City Surf Project, a non-profit organization that teaches inner-city kids to surf, and they are paddling out regardless of the wild weather.

Today’s charges are from Mission High school and despite the cold, rough seas, they clamber into wetsuits. It is the day they have been waiting for. Offered as a 7th period P.E elective, the City Surf Project meets with the kids three times a week.

Mondays are for the classroom where they’ll learn more about the sport, culture, and etiquette.

Wednesday, they swim for conditioning and to get more comfortable in the water. Friday, they hit the beach with volunteer surf coaches who will help push them into waves so that they can learn the ancient Hawaiian past time.

For most of the students, this is the only opportunity they’ll have to access the beach. Before the City Surf Project, some had never seen the ocean before.

Surfing is a giant metaphor for life. It teaches perseverance and patience, as well as respect for nature and oneself. The lessons learned from the ocean are instilled into the City Surf Project by its founder, Johnny Irwin.

“The three pillars to the City Surf Projects Philosophy,” Irwin says to a circle of a diverse group of smiling faces, “are to respect nature and our fellow surfers, health, and personal growth.”

Each beach outing begins the same. First, the students circle up in donated wetsuits and begin a series of stretches and exercises. Then, they go over safety precaution, with the more experienced students pointing out the rip currents and how to avoid them. Next, they talk about their goals, each student desires to progress.

Each student goes around and explains one example of each. Kevin Campos, a Mission High student who commutes from Oakland, California, suggests not eating McDonald’s and playing soccer, when asked how he was going to maintain a healthy life. In the parking lot, he goes over his soccer drills to warm himself before the plunge.

Irwin’s goal is to spread the gospel of surf to those who otherwise would never have the opportunity. His father surfed without the luxuries of wetsuits and leashes in what was called the Bonfire Era of Ocean Beach because surfers had to stoke a blaze on shore to fight off hypothermia. The City Surf Project is Irwin’s way of thanking his father for passing the love of surf onto him.

Many of the students say they joined the City Surf Project because their friends were enrolled and it sounded fun. The program is offered at Mission, Leadership, Independent, and Lowell High school. By the end of the semester, the students have the knowledge and experience to begin surfing on their own.

Not all of the volunteers are experienced surfers at the City Surf Project. SF State Brenda Gonzalez had never surfed a day in her life before signing up to intern.

“As an environmental science and sociology major, I wanted an internship that would encompass both,” Gonzalez said.

In the shorebreak, Gonzalez clutches onto a Gopro camera tightly. Today, her job is to get photos for the City Surf Projects Instagram. Hailing from Monterey Park in Los Angeles, Gonzalez has never been in water this cold before.

“Just like the kids, my parents didn’t go to the beach so I’d bus it to Venice and spend the day there,” says Gonzalez.

After her job is done, she gets a surf lesson of her own. With a bit of instruction, she’s surfing in no time. And just like the kids, she’s hooked on the free thrill of riding waves.