Sia Amma: A One Woman Show 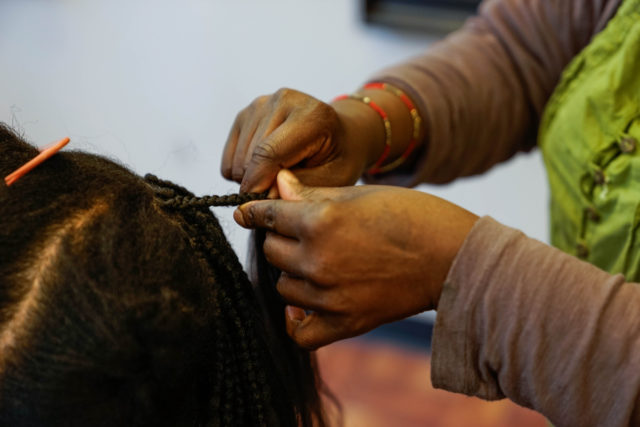 Sia Amma braids a weave into her clients hair at her salon, SF African Hair in the Tenderloin district on Wednesday, March 7. (Amarah Hernandez/ Xpress)

The streets were a perfect balance of calm and chaotic, the air was cold, and the sound of a new apartment complex being built echoed throughout the shaded street. Sia Amma’s hair salon, Best Hair Braiding Salon, is in the middle of it all.

Amma was a feminist to say the least; in every sense of the word and in every facet of her passions.

White feminism and Black feminism are two different realities that can be explained by intersectionality, but on the other hand Women Gender Studies professor Brooke Lober states, “Not all women are born feminists, feminism is a set of theories and politics –not a condition of birth.”

To say that she does it all would be an understatement. Amma acts, is a playwright, writes books, and is a comedian, just to name a few of her passions. But braiding hair has always been a constant in her life, and her main source of income.

In response to what kind of comedy she does, she says a lot of her jokes are racially based. “People always say things like ‘go back to Africa!’ I am like, ‘Do you know how much the tickets cost?!’” she shares as an example of one of her popular jokes.

“I just try to balance with trying to make a living and trying to survive,” she says in a matter-of-fact tone.

Outsiders cannot walk into the shop with ease, a protective gate served as a barrier in front of the door. It is a quaint salon with three chairs and two washing stations. The wall directly to the right had a plethora of rows full of braiding hair packs hanging on the wall, ranging from straight hair to kinky hair, and black and brown colors to green and blue. The brown walls gave it a warm feel that one gets from being in a living room at home.

She talks over the score of a PBS podcast playing the background. Her hands move vigorously as she and an associate micro braid a client, occasionally speaking in her native tongue to her braiding counterpart to comment on the podcast, which happened to be discussing the topic of gun control in America. She would take a little pause when resting her hands or to shake her head with disapproval.

A hairstyle of micro-braids can have a person in the salon for hours, nothing that Black women are not used to already, so two hands are definitely necessary. Amma does all sorts of braiding styles at her Tenderloin salon and has been for decades while in and out of school.

Amma left her home on the coast of Liberia during the civil war that took place in the 1990s and came straight to San Francisco with her family.

According to Peace Building Data, the civil war in Liberia, which was from 1989-2003, left hundreds of thousands of people dead, included an ethnic divide, elites who abused power, a corrupt political system, and economic disparity. All of that violence caused many to flee to the States.

In San Francisco she eventually went to community college before transferring from City College of San Francisco to San Francisco State University in 2008. At the university she double majored in communications and drama. But her true passion lay with performing.

No relationships are stirring for Amma at the moment. “I think I’m much more married to my performances, nothing makes me happier than making people laugh or performing, I think that my biggest fear is losing myself,” she elaborates.

She even has a space for a theater around the corner from the salon, literally. She has had the space since 2003, but she put that theater dream on hold as the area was getting heckled by people who had intent to gentrify. “I braided all day then I would go over there and perform,” she recounts the past.

She still has it, but instead uses it as a storage space for the products that she sells at her salon.

“With gentrification comes a lot of stalking and harassment,” Amma continues. “I was getting stalked and followed so I shut it down for my safety.”

She explains how San Francisco was very different when she first came here. “I remember there was more black people and more black neighborhoods,” Amma explains.

According to the U.S. Census Bureau in 2000, Black people made up 7.5 percent of San Francisco’s population, by 2016 that number went down to 6.5 percent.

“The first African braiding shop in the Bay Area was in the Fillmore!” Amma exclaims excitedly. That is where she met Satta, her fellow braider and colleague at the salon.

“I known her for over 20 years, we met at the first braiding salon in the Bay Area ever called African Safari, everyone that came from Africa worked there. I worked at this shop with her for 5 years,” says Satta.

In her most recent one woman show—titled Uncle Sam’s Children in Africa—she tells of her life in Liberia and what brought her to America, accompanied by a crash course on Liberian history.

She has a voice made for performing, the same booming voice that emerges in between laughs at the hair salon, it finally gets to take the main stage. She paints pictures with her hand gestures, giving the audience a virtual tour of her village in Liberia.

“It was really inspiring, with lots of drama, history, and a beautiful song,” commented a spectator Elizabeth Loyola.

Amma has a book that she says is finished, but she just cannot seem to put down the pen, she explains while continuing to laugh. When she gets to the topic of her love for performing that her eyes light up, and the volume of her voice grows with excitement. With her laugh booming throughout the small salon, she gets into some of the topics that she covers in her book, which is a feminist bible, so to speak, and based entirely on interviews and conversations that she has had with various women.

“One of the things that I learned from those interviews is the tremendous amounts of silence about these kind of topics, these interviews would happen after I performed or just people would tell me things while I did their hair.”

She touches on first dates, to women discovering sexuality, the difference between infatuation and love, vaginas and more.

“I will finish, then I’ll be like ‘okay maybe just one more, how about a first date? Or teenage pregnancy?’”

Her goal is to increase the dialogue for all of these topics that women feel the need to be silent about, through interviews with various women. “For a lot of us the separation between us and our parents comes from discovering ourselves and our sexuality,” she explains.

Her salon, and many like it, become a sanctuary for women, a safe space where your hair in its natural form is not judged and such a comfort then becomes a catalyst for open conversation and if you are lucky… a little gossip.

“It’s getting way too expensive, I wanna go far away from here,” she says, her voice trailing off into silence.

One reason she wants to go back to Liberia eventually is because she finds it harder to be Black here. “I never questioned my Blackness it was just there, but then you come here and everywhere you go, you have to prove yourself,” she admits.

She hopes to go back to teach children or to be an ambassador for women’s health.