Enlisting for a Higher Education 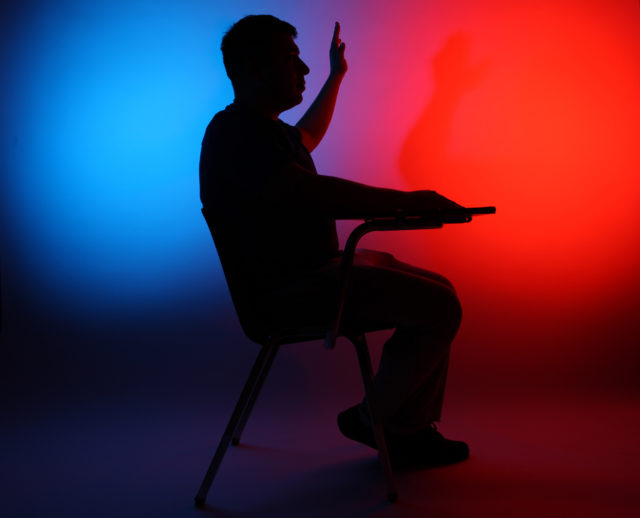 “Murderers” and “puppets” are just a few of the insults student veterans at San Francisco State University have received from their fellow students and faculty.

Veteran Services Coordinator, Benjamin Yang said that most of these insults are made out of misconceptions and stereotypes of the military. He stated that although most student veterans are taught to be thick-skinned and ignore criticism, he worries for the veterans that are still struggling to transition to regular civilian life. He believes that not all veterans can cope with the discomfort of being outed in class, especially those with PTSD.

To address this issue, Yang has partnered with Swords to Plowshares, to conduct classes, “Combat to Community”, that teach professors and faculty how to avoid situations that might trigger student veterans past trauma. These classes have been curated twice now and not a single faculty member has taken them, despite the classes being made especially for them.

“Staff members, psych counselors, the register’s office, admissions, and even UPD have all attended but, still no faculty, said Yang. “These classes are important to begin conversations that some veterans are too afraid to talk to their professors about.”

Later Yang explained that there was actually one faculty member, a dean, but still no participation by professors to  attend these courses.

Yang believes that these classes are necessary because triggers to PTSD are everywhere.

“It can be anything not just words that trigger these episodes,” explained Yang. “When I was a student here, the weekly tsunami alarm was always off-putting to me, it was hard for me to focus after. We witness and experience events differently than most people and though we veterans are resilient we still have trouble talking about these vulnerabilities.”

On the afternoon of February 28, students protesting Immigration and Customs Enforcement banged on classroom doors and yelled “walk out!” to encourage other students to participate. However, student veterans at Burk Hall misheard and thought students were yelling “lock down,” and according student veteran, Gabriel Flesher, this alarmed him to think they should look for the perpetrators that, in his mind, was the cause of all the yelling.

“Yelling and banging on doors is terrifying for anyone,” said Flesher. “I went outside and immediately thought something dangerous was happening. The recent campus shootings didn’t help either. It was like I switched to survival mode and that’s one of the differences between veterans and other students, we’re always scanning our surroundings to be assured of our safety.”

Forty-year-old Flesher, who was in the coast guard for fourteen and a half years, did one tour in Iraq, and thirteen three-month patrols to the Bering Sea, and has served in Africa, South and Central America, as well as Thailand, Singapore, and the Continental US. He believes that student veterans are not typical students.

“As vets, we have had huge responsibilities and tasks that we have completed, some of us have been to war and experience death at a level that people in regular society, simply cannot identify with, especially in a class environment.” said Flesher.

To Flesher, the “Combat to Community” classes have created an opportunity for staff and faculty to hear and ask questions to therapist and psychologist that work with Veteran Affairs and the veterans themselves

Another issue that the classes address is the student veterans’ misconceptions. Many student veterans have come to Yang to complain that certain professors single them out, make them feel uncomfortable, and even criticize them for their involvement with the military.

Jason Chittavong, a thirty-six-year-old history major, says that he’s heard from other veterans that a lot of their classmates, and even professors, have called him a “murderer” when they realize that he is a veteran.

“I refrain from giving my insight when war is a topic in class, even though I might have some in first-hand experience with it,” said Chittavong. “It leaves you kind of open, everyone turns for you for the answers and sometimes it becomes an uncomfortable situation.”

Jerry Cabilatazan, who did four years in the Marine Corp and did two back to back tours in Afghanistan, says that in class some people have asked intrusive questions, like if he has ever killed anyone. There were many times when he was called a murderer and not given the chance to explain the context to his actions.

Cabilatazan said that he was providing security for an all-girl school in South Afghanistan when the Taliban came and started shooting the school.

“Do I let these kids die or stop one individual?” Cabilatazan commented.“It can get really dark and often you get [put] in a situation and get asked ‘how I can make that decision’ and I don’t know. All I know is that, that girl (children) have nothing to do with this, she’s just trying to do the best she can in her age and we know better than her, so it’s our job to protect her.”

Christopher Ramirez, another student veteran, says that these invasive questions get asked a lot in class with faculty supervision present, who often also have their own bias with his involvement with the military. Flesher believes in order to counter these biases, there should be more awareness to everything else that veterans do other than combat.

“So many veteran contributions are lost in translation,” said Flesher. “There are medics, engineers, search and rescue groups that a lot people gloss over and never really given credit, some of our medic veterans actually helped student protestors how to aid themselves during the protest in Berkeley.

Ramirez, now thirty-four-years-old and served for sixteen years as a medic in combat, shares that he helped people protesting because he feels that his primary principles revolve around serving people in need, something he says has been with him even after returning from the military.

The past patterns of protest and school shootings, have inspired Ramirez to want to do trainings and teach other people how to prepare for injuries done in protest or potentially heal other wounds.

“Student veterans are untapped resources, that given the chance can bring so many contributions to this campus,” said Ramirez.

More than anything, student veterans, according to Ramirez, just want to be have the same opportunity to succeed in academia like their peers, but want teachers to be conscious of the other factors that might prevent them from doing so.

Last year Ramirez had to seek military withdrawal because he was summoned and deployed to another state. He got incompletes in most of his classes except for one. The sole professor who gave him a withdrawal unauthorized, accused Ramirez of not being communicative. However, Ramirez said he sent emails to all his professors.

Ramirez says that what really infuriated him was not having to pay back Veteran Affairs for not passing the class, but how unwilling the professor was to even understand his situation meet to have a conversation to fix the problem.

“The thing is I didn’t have a choice, I was literally at Fort Knox Kentucky and then Fort Bragg Carolina,” said Ramirez.

Ramirez says that not doing well in class in not only detrimental to his grades, but it could have affected his assistance from the VA, and at the moment in his life right now, the VA that is the economical and emotional support he has.

Cabilatazan also believes that because his education is so dependent on the VA, that student veterans are held to higher standards.

“We are ten times harder on ourselves than the most of the students,” said Cabilatazan.  “This is my life, if I don’t do better than this I don’t know what my future is gonna be like, I sacrificed four years of my life for this opportunity and I’m shitting it away because of this low score, most people don’t think like that.”

Cabilatazan explains that school is his only option and if he fails then his sacrifices in the military would be taken in vain.

“Some people when they fall have a little bit of support left , someone to hold onto just in case you fall,” said Cabilatazan. “But if I fall I fall deeper and I don’t’ have any other choice I have to dig myself that.”

Ramirez and Cabilatazan both agree that if faculty members and professors take the “Combat to Community”  classes they would be more aware of the situations that student veterans face and more understanding to the external hardships they have no control over. But again the problem that the Veterans Affairs Office has is convincing faculty members to participate.

“For me, I’m cellular molecular biology major,” shared Ramirez. “Our STEM professors say they don’t have time, or that’s what the common statement would be, but they have time to have keynote speakers to come in, these seminars and all that is great, don’t get me wrong, but these classes aren’t long either. It’s a little disheartening and frustrating.”

The next combat class will be held in the summer for the next Fall semester. For more information on the Combat to Community classes, please contact Benjamin Yang at his email [email protected]