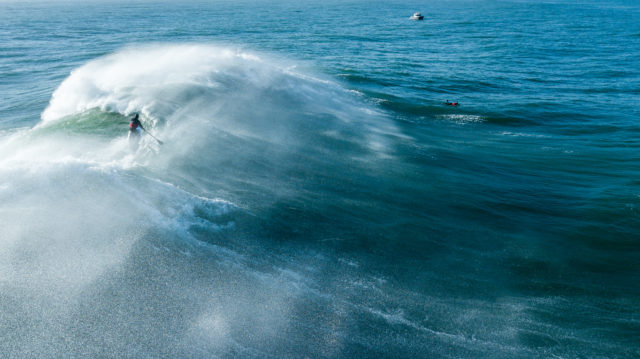 Haley Fisk, of Pacifica, is the only person who rides a stand up paddleboard at Mavericks. (Travis Wesley/Xpress)

“They call it the death sound.”

The harbor buoy off Pillar Point in Half Moon Bay, California is more than a sliver of safety for seals from sharks lurking in the abyss below.  Painted a loud shade of green, the buoy is reassurance of land and harbor but it serves another purpose. One it was not intended for.

Rocked by large swell, the buoy’s bell is a subtle warning for surfers at Mavericks, a legendary surfing spot in Northern California. The louder and more frequent the tolls,the bigger the waves are when they rear from the depths.The sound is haunting for even the most seasoned of watermen but for the Notch Crew, the harbor buoy’s eery crescendo is their church bell calling them to mass.

Despite riding mountains at high speeds and having each others back when things go sideways, the Notch Crew bares no resemblance to a motorcycle gang. There’s no patches, tattoos, and nobody is hazed in. Just a group of middle aged men with day jobs and a deep desire to surf Mavericks everytime it breaks.

The genesis for the Notch Crew was a war between two of the Bay Area’s most legendary badasses in big waves, Mark “Doc” Renneker and Grant Washburn.

In the La Niña winter of 1998, Renneker and Washburn set out to see who could surf

Mavericks the most. Out of the 111 days they deemed surf-able, Renneker and Washburn tied at an astounding 86. To do so, they paddled well over 127 miles.

A shy giant who’d rather let his surfing do the talking for him, Washburn shrugs at the herculean feat. “That year the Pacific Ocean seemed to be in Asia; the tides were so low and Mavericks loves a low tide.”

Two decades later, and the game has been conceded to Washburn by all challengers.

Doc Renneker, a cancer researcher and physician to the needy, has moved his attention to a secret spot up north that is even more remote, farther offshore, and sharky. A place where the crowds can’t follow him. Washburn’s focus remains on Mavericks.

There wouldn’t be a Notch Crew without Washburn. Doesn’t matter how big or small the wave, he’s out there with fellow veterans; John Raymond, Mark Sponsler, August Hidalgo, and Christy Davis, who at 65 is the oldest member, but rides more waves out there than all the rookies combined.

Washburn, 49, is a filmmaker from San Francisco, a three-time-finalist at the Mavericks Invitational, a husband, and father. Washburn’s knowledge of Mavericks is second only to Jeff Clark.

Clark is the don of Mavericks, the man that all surfers headed to Half Moon Bay pay respect to. Clark is notorious for surfing Mavericks alone for 15 years before he could convince a group of Santa Cruz surfers to join him in the 1980s. Now, retired from riding giants, Clark is the ambassador to Mavericks and the director of its surfing contest.

Washburn knows Mavericks better than most men know their wives and children. He can calculate a wave breaking at Mavericks down to a ten-minute window. If there’s only one wave that’s going to break that day, Washburn is in the spot to catch it.

Every winter, Washburn keeps a notebook of his notches, detailed descriptions of wind, waves, and tides. Next to every date is the swell period, or the distance between wave crests, as well as the height of the swell and its direction; All invaluable information that he shares openly to newcomers as the spot’s resident docent.

The magic ingredients for Mavericks is a swell under 300 degrees, so that it isn’t shadowed by the nearby Farallon Islands. That’s 18-feet tall at 20 seconds apart with easterly winds.

“To earn a notch, a surfer must paddle from the beach and catch a wave in the bowl. If you use a jet-ski or boat to get out, it doesn’t count,” said Haley Fiske, who despite his dedication and experience at Mavericks isn’t a Notch Crew member because he uses a stand up paddleboard rather than a rhino chaser.

Mavericks doesn’t break everyday. It takes a strong storm from the Pacific Northwest to wake the monster. January 18th, 2018 was the notch of the season. The swell was 20 feet at 20 seconds. When it reached the reef at Mavericks, the waves were nearly double in size. Few surfers wanted a piece of it. Boats and jet skis were destroyed by rogue sets and the Mavericks Invitational was called off in what Washburn says is a million dollar decision.

“The winds were forecasted to be south and when it’s over four knots from the south we get fog and they couldn’t run nor would be safe too in that visibility, but the winds changed that morning and it was already too late,” said Washburn, whose advice is paramount to the development of the World Surf League’s Mavericks Big Wave Challenge, for which they purchased a permit last year.

“It was the biggest day in nearly a decade,” said Washburn. He admits to not being nervous when surfing Mavericks but this day, “…was a day that mistakes couldn’t be made.”

The session burns deepest in Washburn’s blue eyes as he recounts the leviathans that thumped Pillar Point. There isn’t a hint of fear in his voice as he talks about waves the size of buildings roaring through the lineup.

Luca Padua, a 16-year-old from Half Moon Bay is the heir to Washburn’s spot in the bowl. On the day known as “the massive Thursday,” a busted knee kept him from surfing alongside those brave enough to tackle the biggest waves of the season. “I couldn’t surf but I did rescues on the jetski and saw Grant take a few 30 footers on the head. Six foot to sixty foot, Grant Washburn goes,” said Padua.

Steve Hawk, a close friend of Washburn, and the writer who broke the seal on Mavericks, exposing it to the world on the cover of Surfer Magazine, said that Washburn has Mavericks so completely mastered, “…that he can suit up from the lot, paddle out, catch a wave, and be back on the road in 45-minutes.”

On what could be the last day of the year, Washburn’s out the back in the howling winds with Steve Hawk and a crew of men all over the age of 50. With the sun slipping beneath the horizon, Washburn is the reference point of where to be to catch the few waves coming through in the waning swell. His friend, Kevin, catches the biggest and best wave of his life at 55. Washburn’s on the one behind him.

He takes off facing north, switches back south as the wave explodes in front of him, and races the wave to Mushroom Rock. Unlike 99 percent of other surfers who charge Mavericks, he doesn’t look like he’s hanging on for dear life, but toying with the beast, begging the wave to surprise him. Today however, is just another notch.