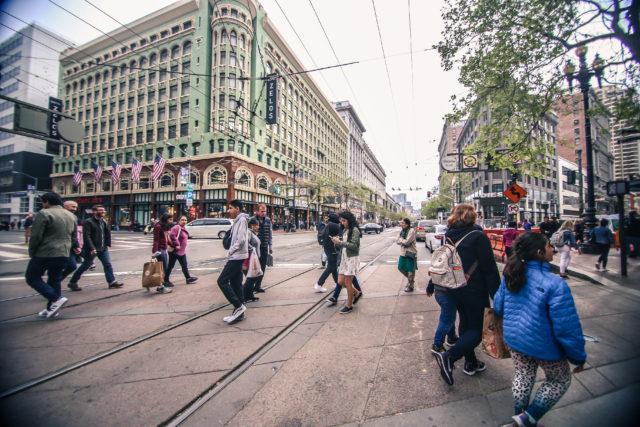 In 2014, the San Francisco Board of Supervisors and SFMTA prioritized pedestrian and cyclist safety by adopting Vision Zero, a multi-national initiative with the purpose of decreasing traffic collisions with cyclists and pedestrians.

There are more traffic cameras and radar around the city than ever before. The San Francisco Police Department has also been pushing to monitor the busiest and most dangerous corners for pedestrians.

Miranda Lee, born and raised in suburban Ohio but now resides in San Francisco, experienced a concussion, vertigo, and a foot fracture from a collision with a Toyota while crossing Webster Street in the Fillmore District. Lee says her emotions from the traumatic incident not only affected her, but the ones around her as well. Her boyfriend who lives with her has also had to cope with his own anger from this trauma.

“It was really hard for him. He wasn’t with me.”

“He got the call when he was at work. I think it’s really hard for him, he feels very angry,” said Lee while reflecting on the past two years. “I think a lot of his anger is directed toward the driver of the car. I would probably feel the same way if the roles were reversed.”

Lee was carrying her purse and a boxed hair dryer the moment she was struck by an Uber driver taking a sharp and fast right turn. With the help of therapy, understanding coworkers, and her boyfriend, Lee has managed to get to a happier place.

While the number of pedestrian fatalities in San Francisco can vary widely from year to year, it has remained relatively stagnant in the past decade. In 2015, 724 pedestrians were injured in collisions while twenty people died from walking on San Francisco’s streets. However, the number of collisions has significantly declined since 2012, which totaled at 954 pedestrian collisions. According to city performance scorecards the fatalities among cyclist and pedestrians have decreased from nineteen to sixteen between 2016 and 2017. So, the measures the city of San Francisco are taking to improve safety are working.

Joseph McFadden, a father and former captain of San Francisco Police Department, visits many of the vehicular fatalities sites in his district. He believes that it’s important to know where these accidents are taking place. McFadden is now working at San Francisco’s Hall of Justice where he works with crime data.

“Every district has like 10 hot intersections where most accidents occur, whether it’s pedestrian or vehicular,” said McFadden.

One hot intersection is the Persia Triangle on Geneva Avenue in Ingleside District. The corner is convoluted with a bus stop and five different roads. Recently, an incident involving a woman crossing that intersection occured. McFadden arrived at the scene after 911 was called.

“It was the pedestrian’s fault this time. The hill there (on the street) makes it hard for vehicles to see,” McFadden said.

The traffic bureau and their sting operations help with proposals sent from the Board of Supervisors to help curb these fatal accidents from happening. At last year’s special meeting of the Board of Supervisors, Walk SF, a pedestrian advocacy group highlighted the need for traffic improvements. Walk SF’s Outreach Director Natalie Burdick gave a detailed explanation of why things need to improve.

“Dylan Mitchell was twenty-one-years-old and was riding his bike on 16th Street before being hit and killed by a truck. He died at the scene,” Burdick said as she panned to the next slide. “This is Arman Wester, the only son of Alvin Wester who was killed by speeding vehicle taking a right turn.”

Judy Szeto, a San Francisco community member, was hit at Anza and Park Presidio by a speeding driver. To this day, her daughter takes care of her.

“Judy suffers every day as her daughter Jenny takes care of her, helping her cope,” Burdick shared.

As San Francisco’s population increases, it is apparent that alleviating traffic congestion is important. The biggest concern the city faces is with more congested streets come more opportunity for accidents.

In October, the Board of Supervisors and Vision Zero came together to discuss the progress the city has made. Their goal is to make San Francisco a place where no one dies from traffic accidents. The city is planning to pay SFPD officers overtime in order to keep the streets well patrolled so these accidents don’t occur. According to SFPD and City officials, there is $6 million in funding for overtime officers.

Lee, the woman hit by the Uber driver, says she still looks both ways before crossing the street.

“Weʼre not talking about it enough,” said Lee. She explains that each accident tends to be a short segment on the news.

When asked about the data from the traffic fatalities since 2014, Lee had another viewpoint.

“It feels as if itʼs something that is not gaining traction and I donʼt know why that is. It bothers me that the Uber driver is still driving after four months, and was only given a citation.”

Leeʼs experience has left her inspired to do more and get involved. She’s attended support groups for those who have had similar experiences to hers. For others like Lee, she says the problem and the healing will take time to resolve itself.

*Miranda Lee’s case of the accident is still pending. She decided to use a pseudonym for this story.*