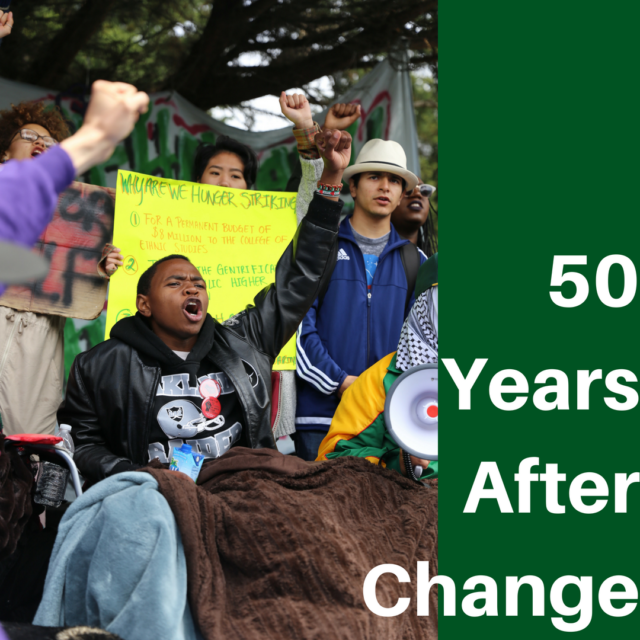 The current semester at San Francisco State University celebrates a milestone that has changed and influenced our country and the world. Black and Africana Studies was the horizon for an inclusive learning platform that has been geared towards teaching students who they are and where their cultures come from.

This spring semester marks the fiftieth anniversary of Africana studies, ever. After fighting and creating test material for courses with an Afrocentric concentration at a predominately white institution, activist won the battle and implemented a new branch to higher learning.

Within the last fifty years the department has faced ups and downs, but have fought and conquered nonetheless.

There have been points in Africana Studies’ history on campus that can be used as markers of growth and challenges. From the original strike that worked as a catalyst to Black Studies to recent battles with administration due to underfunding of the entire Ethnic Studies college.

At this time, the Negro Students Association changed their name to the Black Student Union in hopes to channel a new direction of their presence on campus.

A point in history that can now be found in textbooks, the strikes around campus linked to the Black Power Movements in the Bay Area. Maulana Karenga notes that, “By 1966, the Watts Revolt and the Black Power Movement has ushered in a more racially self-conscious and assertive activism and Black Students at SFSC and on other campuses began to respond…”

On November 6, 1968, the BSU declared a strike that called for a curriculum dedicated to Black Studies. Black students and faculty did not expect for Africana studies courses to appear out of thin air, so they created test courses based off prioritized curriculum, such as “History of African Americans” and another delving into the religious background of people who are a part of the African diaspora.

The first of its kind, Black Studies became the catalyst to an entire college of Ethnic Studies on the same campus many years later.

Decades later, another strike for ethnic studies was implemented by students. Although the 2016 school year was scraping the fifty year mark, it showed not much had changed with administration and making ethnic studies a priority.

In 2016, ten students led a hunger strike in protest of the lack of funding for the College of Ethnic Studies—specifically a budget cut that would have directly affected two new hires in the Africana Studies department.

Ghila Andemeskel was the executive coordinator for BSU at the time of the strike. His role was making a list of demands for the Black Student Union that overlapped with some of the same demands that would represent the Africana studies department.

Ghila summed up the long list of demands by stating the goal for each of the demands, such as creating safe and open spaces for the black community on campus and returning funding that was taken away from the department. The former demand was met with the creation of the Black Unity Center, the latter fell short.

Although some demands did fall short, others were successful. Ghila mentioned that it was predominately the itemized demands that were met almost immediately.

Ghila went on to celebrate the wins of the department and listed, “creating department status for race and resistance, the new faculty hires, the afrocentric floor and the black unity center…”

In an earlier article, Dr. Ifetayo Flannery shared her experience as one of the previously mentioned new hires for the department.

The hunger strike sparked conversation throughout the country. Leaders from the Black Lives Matter movement, along with activist and actor Danny Glover, came to campus to show support.

Hanna Wodaje, an alumna of the College of Ethnic Studies, specifically Africana studies, played a credible role in the 2016 Hunger Strike for Ethnic Studies.

Hanna talked about her experience and expressed, “It was a day and night thing. We worked on that day and night while also making sure that we were making all the information accessible to all of the black students on campus and making sure that they were showing up to the protest and involved to make sure they knew what was happening.”

In the end the budget was given to the Africana studies department and the new hires we welcomed aboard. Dr. Flannery serves an important role in the Africana Studies Department.

2018: The 50th Anniversary of Africana Studies

Many traditions are kept alive in the Africana studies department, including ideas and gatherings that were passed down since the birth of the department.

“Chicken and Juice,” a gathering hosted by Africana Studies students leaders and faculty, is held every semester for over ten years with the intention of bringing together old and new friends from the department.

Christopher Roberts, an alum of the program shared with me his experiences, lessons learned, and his hope for the program in the future. Roberts, PhD candidate and college professor, obtained his M.A. at San Francisco State University.

He shared, “In higher education, we find ourselves in a position where Black students are still taught to bury their brilliance, where Black teachers are still told to treat Black children like potential criminals, where Black professors are still rewarded for ignoring their people and enlarging their pockets. Black joy is still considered something we don’t deserve, Black thought is still devalued, and Black lives are still treated as if they don’t matter. These things are still the norms because they are “business as usual.”

Christopher went on to celebrate, “However, there is a place where this “business as usual” has been unseated as normal. There is a place where instead of this “business as usual”, there exists creativity, resistance, joy, pleasure, power, imagination, community, and commitment for Black students. There is a place where Black students do not bury their brilliance; they watch it blossom. And that place is Africana studies. And the place to which we owe the growth, development, perpetuation, and sustaining of so many similar places not just for Black people in the U.S., but around the world, is San Francisco State University Africana studies department.

Guest speakers and professors celebrate all semester the importance of the campus we are on and the incredible change it made to higher learning.

Throughout the country and the world, you are now able to learn about Black people in their entirety. Seperate history. In depth science and psychology. Life and culture before slavery.

Here at San Francisco State University you can get a degree in ethnic studies with Africana studies as a discipline. The concentration has developed so far into Doctorate programs, offered first by Temple University.

Africana studies is offered throughout the country and the world, with at least 185 accredited colleges and universities in the U.S. offering some form of Africana studies. However, there is still work to be done and strides to be made. Former and current students band together and use what they learn in the classroom to better the African-American community as a whole.