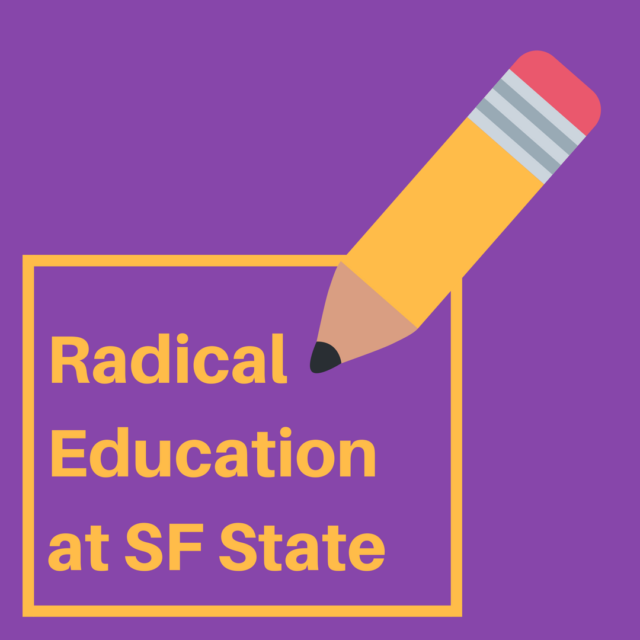 “The very fact that you have chosen to teach your own class is political—it’s radical—and it’s an idea that can spread like wildfire,” Kathy Emery, 63, says to a room of some twenty students. The students are of all ages. They are listening attentively to Emery’s words, which seem to command the respect of a seasoned professor, but they are not here only as students.

They are here as student teachers, who have designed their own curricula centered around subjects such as: decriminalizing homelessness, cultural warfare and hip-hop’s role in revolution, philosophy in TV and film, hate speech, funk music, media literacy—hell, there’s even an entire class dedicated to The Simpsons. This is San Francisco State’s Experimental College.

Progressive pedagogy is at the core of the Experimental College, or ExCo. Based in part on the educational theories of John Dewey and Myles Horton, progressive pedagogy encourages a hands-on approach to learning,  an inverted model of education, and a radical way for students to learn together about topics they feel are lacking in the established curriculum. As Emery puts it, “You learn by doing. You don’t learn from a book, necessarily, but you learn by practicing. You learn discipline and perseverance by trying to learn something.” That sentiment is the engine that fuels ExCo.

Thirty-year-old BECA and Africana Studies major, Damion Square, is slated to teach a class called “Cultural Warfare 101: Hip-hop’s Role in Revolution in the 21st Century.” A self-proclaimed student “artivist” and community organizer, Square makes “revolutionary, political hip-hop with a conscience,” (emphasizing the ‘conscience’). “Think, Tupac, DMX, and Mac Dre all in one,” he says.

As an avid hip-hop “connoisseur” and lover of history and politics, Square says “the point of [his] class will be to give context to a lot of the societal ills that are happening but using hip-hop as the platform.” Citing Author Neely Fuller, he emphasizes “if you don’t understand white supremacy—what it is, how it works—everything else will only confuse you…The entire planet is dancing to the music of black and brown men [so] using hip-hop as a bridge to deliver that message [of understanding white supremacy] made a lot of sense to me.”

In terms of the structure of his class, Square says, with a slight grin “the typical class is not going to look typical…I am sure there are going to be a lot of uncomfortable moments in this class but in those uncomfortable moments is when people are able to move and able to discover new things within themselves that bring them to profound realizations, and that’s when we have change.”

Square’s class speaks to the history of the Experimental College and its roots in the counterculture of the 1960’s.

After an almost decade-long effort by Emery and several key “faculty allies” to revive the program,  the stars have aligned on the eve of the 1968 Student Strike’s 50th anniversary. In November of 1968, the Black Students Union, the Latin American Students Organization, and the Filipino-American Students Union coalesced as the Third World Liberation Front, staging  a five-month-long strike to protest the lack of representation in the university’s curriculum. The strike gained national news attention when it erupted in civil strife and televised police clashes with protestors. The strike resulted in the creation of the Ethnic Studies department as we know it today.

Emery talked about her goals for the future of the Experimental College. “One of the things I hope this program does…is the same thing that it did originally, and that is have a qualitative impact on the culture, politics, and pedagogy of the school. I’m hoping the next sixties social movement is coming. This is part of the larger #NeverAgain, #MeToo, Black Lives Matter, Occupy, all that stuff. I’m hoping this is part of that. And if it is, there will be systemic change.”

22-year-old senior, Rose Kitchel is teaching a class called The Language of Hate: American Hate Speech, Its History and its Political Application. In the age of social media, Kitchel sees her class as especially pertinent to the collective discourse. “I think it’s really important to be aware of hate speech, especially since we have a lot of politicians right now using dog whistles—using very coded references to hate speech… I mean just go on twitter right now,” she says with a laugh. Kitchel says a big focus of her class will center on internet culture and how speech is used in those spaces. “Other than the discussion of [the N-word], there really was no discussion of hate speech [on campus]. There was no discussion about this very powerful political weapon.”

The ExCo platform is being used in a way very close to home for San Francisco. 48-year-old Communications major Garrick Wilhelm has designed a class on homelessness called  “Homelessness: The Rhetoric of a Social Problem.” Wilhelm, who himself had been homeless on and off for about four years, saw the need to create a class where students could learn about the intricacies of homelessness and deconstruct myths about homelessness.

He says, “for me my education has been very  much about my recovery—about pulling myself up out of the hole I was in and so in many ways my lived experience is—kind of—more valuable, even, than my education and I think the opportunity to share that lived experience, to make the suffering and hardship I went through, valuable to other people is amazing.”

While the program is essentially founded on political principles—and it has its obvious political applications—the platform can literally be used to teach anything—as long as it gets approved by the newly appointed board who act as “gatekeepers”.

ExCo has been used to teach classes on peer-to-peer counseling, funk music, conspiracies, journaling, monsters, while future classes include: a class analyzing Youtube, “Teaching through Superheroes,” “The Modern Language of Memes,” “Gay ‘Secrets’ of Greek Mythology” and so on.

However, ExCo has its potential pitfalls. Raymond Larios—one of Emery’s original “fantastic four”—who taught a class on cybersecurity as part of last year’s pilot program, spoke about the complications of pitching  an unpalatable class to the administration (say, in growing cannabis). Or, if somebody wanted to teach a class spreading the very hate speech that Rose Kitchel’s class is fighting against. Emery offered “I can’t imagine turning down any course…I don’t see someone pro-Trump being attracted to a program like this but they could prove me wrong.” After taking a second to pause, she iterated “there is a mission statement, a culture that is being created that no one person can hijack.”

The program has ballooned from four courses in its first semester, to over twenty in its second and is growing exponentially. So what kinds of challenges does a program like this face in its desire to be legitimized inside a highly bureaucratic system like a college university?

“Oh god,” Emery sighs. “ExCo is the opposite of what the system is, so how can you get institutional support from  a system that you don’t fit? There are endless systemic challenges.” One of the challenges ExCo is facing is acquiring college units for the offered classes, which can only be given if the classes are listed in the university’s class catalog. Unfortunately, the deadline to apply to teach those classes is March 15—a day before Spring break. “There’s a balance of power over who gets to decide what courses are taught and what the curriculum looks like,” Emery posits.

She continues, “the reality of where students are coming from does not meet  the demands of the system. Students have to adjust to the system, the system can’t adjust to the students. That deadline is going to limit the robustness of [the program]. It’s going to automatically select one kind of student—probably the ones who need it least.”

However, she concedes “It’s not anything malicious by anybody in the administration. It’s a 30,000 student university that needs very highly developed bureaucracy.”

Emery, iterating her biggest fear for the program, says “that’s what has  happened in the past. Student leaders would emerge, interested in reviving the experimental college, and they would work to get it to a particular point, and then they graduate and there would be nobody to pick up the ball…that’s a struggle that any new organization has: how you can maintain high quality leadership from cohort to cohort.”

After taking a minute to pause, she concludes “I have no idea where [the Experimental College’s future] is going. It’s impossible to predict. It’s up to the students who participate.”