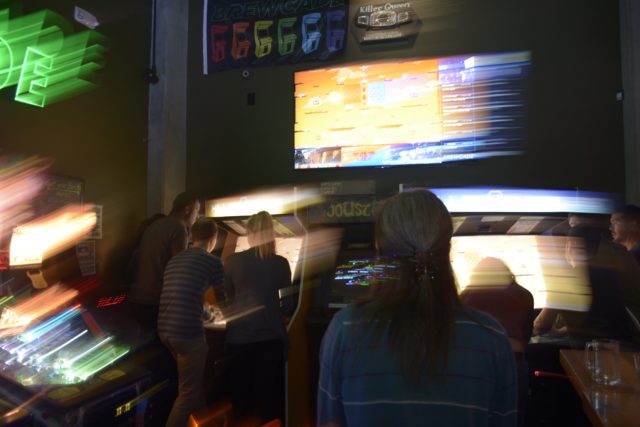 On August 5, twenty-year-old Dominique McLean, also known as SonicFox, won the first ever Dragon Ball FighterZ championship at the Evolution Championship Series 2018. The long-running fighting video game tournament, known as EVO, is also the most notable competition of the genre. Players from all around the world come to Las Vegas to compete.

There was something different about this year’s EVO. The debut of Dragon Ball FighterZ debut made it the most watched game in the history of the competition. According to gaming analytics website GitHyp, the game had nearly 260 thousand viewers at its peak in the tournament.

The longevity of the EVO tournament and its recent spike in both viewership and competitors is an indicator that competitive gaming is on the rise. And eSports expand beyond EVO.

Beyond the Story: Listen to writer Jeremy Julian speak with our Multimedia editor Jacob Tucker on the growth within the competitive gaming world.

Video games might still be a relatively new form of media, but the art of competitive gaming has been around since the beginning. The first ever recorded video game tournament took place in the Bay Area in 1972.

This most recent tournament, sponsored by Rolling Stone magazine, was a big step for electronic sports and gaming as a whole. It’s not just the hardcore gamers who watch these competitions. Casual players and non-gamers enjoy them as well.

The medium has yet to be taken seriously by much of the general public, but it has gained the attention and support of media giants such as Disney and Amazon. ESPN and Disney XD both broadcasted the finals for the Overwatch League. Video game tournaments are primarily broadcast over Twitch, a streaming website owned by Amazon.

The Overwatch League was a season long competition that consisted of twelve teams from around the world. Overwatch is one of the most popular games right now. According to the game’s developer, Blizzard, the title now has over thirty-five million players and counting. The game is so popular in the competitive world that Blizzard built an arena in Southern California to house tournaments.

As the industry grows, eSports arenas are becoming more common. In the Western United States, there are arenas in Orange County, Las Vegas, and Oakland.

The Oakland Esports Arena is located in Jack London Square. Tournaments for games such as Super Smash Bros., Fortnite, and Overwatch are held in the arena multiple times per week. According to Luke Brue, the arena’s director for marketing and sales, the business has been open since 2015.

“I have the opportunity to deliver very unique and life changing experiences to people around the world every day,” Brue said.

Brue participated in the the first major event at the Esports Arena—an invitational for video card game Hearthstone.

“Getting to play on the big stage in front of thousands of people is something I will never forget,” Brue said. “Now I get to do this for others every day.”

Defense of the Ancients 2, or DOTA 2, is one of the most popular multiplayer games in the world. The game, which is free-to-play, is a highly competitive arena battle of ten players per game. According to the developer, Valve, at certain times, DOTA 2 exceeds over one million concurrent players.

While EVO is a large eSports competition, nothing compares to the Invitational for DOTA 2. This competition involves many teams from around the world and a prize pool that is much larger than any other gaming competition out there. According to a website dedicated to tracking DOTA 2 prize winnings, this year’s International tournament had a total prize pool of over twenty-five million dollars. At the 2018 International in Vancouver, Canada, the European team OG took home the grand prize: just over eleven million dollars.

Competitions such as the Overwatch League, the Invitational, and EVO showcase just how intense and serious eSports can get. Many players involved in these leagues dedicate their lives to these games. Competitions can become their main source of income.

ESports analytics site ESM.one Project gathers information about these tournaments from total hours watched of a tournament to viewership numbers and prize pools. According to the site, the League of Legends world championship in 2017 had over one hundred million viewers—up from the peak twenty-nine million viewers the year before. These numbers from the site excluded viewership from China.

“The future is likely to hold much a similar path to professional sports you see today like football or basketball,” Brue said. “Full city teams, scholarships in schools, eSports TV broadcasts nightly, and leagues consisting of high paid athletes.”

But eSports isn’t just about the large prizes and fanfare. There are many gamers that enjoy competitive gaming in a more casual setting. Contrary to the common stereotype of loner gamers, video games can be a highly social experience, especially when played in the right setting and with friends. Just like the fierce competitive scene, casual gaming tournaments are hosted all around the world.

These competitions may have small prizes or give away nothing at all. Many players take part just for the thrill of the game or the social aspect. Where highly skilled, competitive players have the eSports arenas, casual and friendly competitions can be found at a place like Brewcade in San Francisco.

Brewcade is a combination bar and arcade in the Castro district. It plays host to different casual gaming tournaments on most nights and offers a place for these gamers to have fun and socialize. The “Super Trashed Bros” are a group of gamers and comedians who host casual video game tournaments at Brewcade every Monday night.

“We like things to be chill, drink in hand, and playing a video game,” Calvin Albright, a host of the Super Trashed Bros, said. “Everything [else] is so eSports or hardcore.”

Justin Gomes-Sharp, another host, says he watches competitive eSports competitions for games such as Rocket League and Counter Strike. The lighter style of the Super Trashed Bros is a welcome break from the intensity of professional competitions.

“It’s been fun,” Gomes-Sharp said. “It’s been a side project of mine that’s been slowly gaining steam and taking more of my time.”