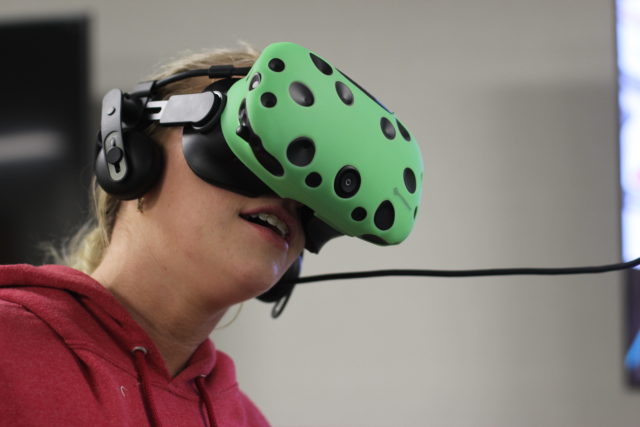 Imagine having the ability to visit any place in the world that you wanted. Not only that, but imagine being able to get there in a matter of seconds. No hassle of having to book a flight and then sitting through a grueling plane ride across the world. What if, on your next lunch break, you were able to enjoy your meal while gazing at a view of the Taj Mahal in the distance? It might seem far fetched, but virtual reality could get you there.

The concept of virtual reality has come a long way since the first head mounted display was introduced in 1960. What started out as just a figment of science fiction, is now a reality in 2018. There are a host of VR headsets that are available to the general public, ranging from high-end options such as the Oculus Rift and the HTC Vive, to the more affordable, mobile Samsung Gear VR and Google Daydream.

VR headsets have been slow to take off for a number of reasons. Mobile headsets come in at around $100, but they are limited in technological ability. More expensive headsets like the Oculus Rift are not only significantly more expensive (coming in at around $400 on Amazon), but they require you to hook them up to a powerful PC that can handle the technology. All the extra wires and sensors needed to make the headsets operational make them a hassle for the average person to use, even if they can afford to purchase them. So, while a personal VR setup might not be feasible for everyone, there are other ways to access the technology. One such option is a VR arcade.

Today, the industry that most utilizes virtual reality is gaming. VR arcades have gained popularity in recent years and found their way to many cities in the United States. These arcades offer gamers the chance to try out the new technology without having to worry about buying a headset or dealing with the hassle of setting it up. Just walk in, put on one of the many headsets that are available, and enjoy the experience. These are places where you can have ample room for whatever game you end up trying–whether it be a calm puzzle game or something more intense like a zombie shooter.

Gameday VR in Walnut Creek, California is one of a few operating VR arcades located in the Bay Area. It offers a place for gamers to try out VR gaming for themselves without having to buy their own equipment. Instead, users pay on an hourly basis and have the choice to either experience VR gaming by themselves, or on a larger scale with a group.

“We have a thirty-by-thirty taped-off area that is for room-scale VR,” Jamis Ridgeway, a joint manager at Gameday VR, said. “People are able to walk around and have a team-based experience. The stuff against the wall with the TV and the headsets are more of a stationary experience.”

While the demand for VR gaming is still relatively low, Gameday VR is looking toward the future. The technology has the potential to really take off, so the company wants to be ahead of the curve.

“VR as it stands right now is in its infancy, it’s only been around for four or five years in its modern form,” Ridgeway explains. “Yes we’ve had phone VR or that Mario Tennis game that made everyone sick, but they never got popular because the technology just wasn’t there. Right now, it’s really rudimentary, but as the technology progresses it’s just going to get easier and easier for people to get in the market.”

There are other ways that VR can impact the world. Take the education system, for example.

At SF State, VR technology is available to students for free. Every Thursday, the Digital Media Studio, located in the J. Paul Leonard Library, offers students a chance to try out VR. Kim Wong, a system administrator at the library who helps run the VR system, explained how this technology can benefit students.

“The content is very important,” Wong said. “In order for you to have good experience, you need to have good content. VR can change everything about the way that you learn. You’re not reading a textbook, you’re not flipping pages. You are actually touching and feeling, and you are moving part virtually. You’re in it.” 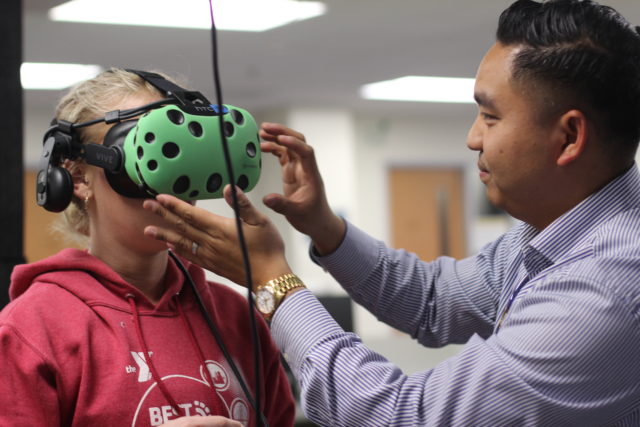 Wong talked about how he first realized the impact virtual reality can have when his daughter was sick and receiving care at UC San Francisco. There, another little girl who was receiving care in close proximity to Wong’s daughter was born with fragile bones that limited her mobility.

“She couldn’t walk, she had bad bones and it was probably going to be like that for the rest of her life,” Wong described. “One day the doctors brought her a simple Google Cardboard VR and showed her the Grand Canyon. You could see that girl’s face change completely. You could see her smiling and she was trying to reach and touch, you know what I mean? That was the moment I felt like you know what, this is really something.”

In many ways, VR could see its most important potential fulfilled in education. There are many ways that it can positively impact the way we teach and learn in school, and it can be applied to many different topics. 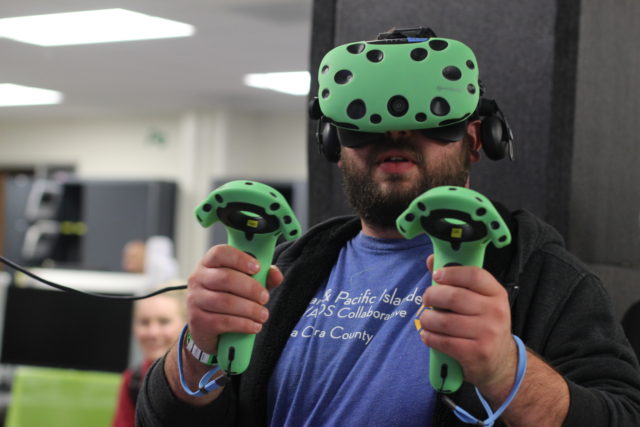 VR technology is also being introduced into classrooms. Jeff Larson, a graphics animation teacher at Balboa High School, recently incorporated VR in one of his classes last year using the HTC Vive. Larson believes that VR can positively impact the way students learn in the classroom in ways that couldn’t be done in the past.

“I think in all levels of education it can be useful in different kinds of learning,” Larson said. “For younger learners, it’s more of the experience of going places or doing things that you couldn’t physically do. It can allow learners to focus and receive content through semi-physical situations, auditory learning, and being able to repeat experiences over again until you learn it.”

VR has applications in higher education as well.

“I was using the VR anatomy and I was able to see all the bones and muscles and just like the human body in general,” said Luka Maeda, an English major at SF State. “It’s really cool how we can do that. The educational system could vastly improve with VR.”

While VR has a growing presence in society, we’re still a long way from having VR as a normal part of everyday life. The technology and content available right now is still rather limited in the grand scheme of things.

Erick Velez is a computer science major at SF State who works at the Digital Media Studio.

“Eventually I think virtual reality is going to stop being virtual reality and it’s going to be more augmented reality,” Erick Velez. “Right now, we can have the students start up a game and like pick apart a person’s anatomy, but they have to put on the headset. I think eventually instead of the helmet being on you, it will be a hologram. That’s the big future move I think for VR, it’s separating from the helmet itself.”

The development of virtual reality has seen vast improvements in 2018, but this is still just the beginning. The potential for this technology to positively impact our lives is there, though it still needs to be fulfilled. If everything pans out the way technology optimists hope, VR could set the bar for future innovations.