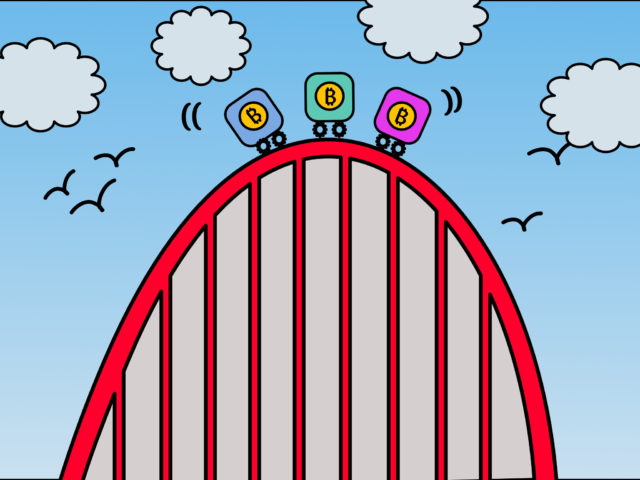 In the market for drugs? You might want to think outside the box for this one.

Or maybe you want to know whether that tomato you’re eating is really organic. Wondering if that news story someone shared with you on Facebook is actually true? Perhaps you’d like to send your friend Jimmy in Scandinavia some money but want to make sure he doesn’t try to lie about having paid you back—Jimmy will do stuff like that from time to time. If only there was a secure way to keep records of transactions in real time that offered both privacy and transparency.

Well, there’s an app for that, sort of. The answer comes via that old Silicon Valley gang’s sweetheart: blockchain. So, what exactly is blockchain?

Yes, blockchain is an actual chain of blocks—digital blocks—that live on servers somewhere out in cyberspace. It’s the magic eraser of computing, a multipurpose solution to an old and dusty set of problems.

In 2008, Satoshi Nakamoto, author of the Bitcoin white paper, outlined the use of a decentralized, digital ledger system to solve what had become known as the “double-spend” problem in computing technology, according to SF State professor, Dr. Benjamin Lozano. Because how can users be stopped from copying and pasting digital currency all over the internet, right? Nakamoto’s solution, complete with mathematical equations, computer jargon, and diagrams with many arrows pointing in many different directions, proposed a simple solution: write every damn thing down.

At its core, blockchain is really an immutable, digital checkbook, one where—because of the fancy cryptography involved—entries can never be deleted or tampered with. Individual transactions are housed in password protected blocks, making them both private and secure, for whatever users may or may not be up to.

Twenty-seven-year-old Lorenzo Monreal may or may not have used blockchain in the past to transact in private, untraceable ways. In 2013, while spending the summer at a fraternity house in Berkeley, California, Monreal just so happened to enter the world of blockchain via bitcoin.

“In order to obtain Schedule I drugs such as psychedelics, cocaine, and ecstasy, I needed a way to get the drugs with being as low key as possible,” said Monreal who accessed a site called Silkroad via the dark web. “Bitcoin was untraceable. You could buy any possible drug you wanted on Silkroad, have it shipped to any address, and there would be no tracking of the packages.”

Just to be completely clear: Blockchain is not bitcoin.

If the two were a roller coaster, blockchain would act as the track the bitcoin train would travel on. A simple equation should further illustrate the relationship between the two:


“The blockchain is the platform that is used to create secure transactions,” explains Monreal, who now attends SF State as a political science major. He describes blockchain as a giant, unbreakable, digital Lego. A secret Lego, with secret contents, and a secret digital address only he holds the keys to. “The part where your transaction becomes untraceable is through the fact that you are using a digital address with no name tied to it. The address is a series of letters and numbers.”

In a strange way, blockchain is both simultaneously public and private. The technology is completely decentralized, meaning it operates arbitrator-free. Instead, it relies on the existing entries (or blocks) to verify all new transactions before they can be added as blocks to the chain.

This is a concept Lozano includes as part of the curriculum for the politics of global finance and crisis course he teaches at SF State. Of course, Lozano’s take on blockchain is much more academic, theoretical even, considering he sees decentralization as one of the key attributes of blockchain technology.

“There are lots of students interested in questions of power, politics, democratization, distributed governance—blockchain just fits perfect with that,” he says. “And I figured it’s been underthought, so let’s think through it.”

One of those students happened to be Monreal. By the time he sat in Lozano’s class during the fall of 2017, he had moved on from making illicit drug purchases on Silkroad, to making investments in bitcoin. Now he’s the owner of his own online business.

Lozano’s interest in blockchain began during his time at UC Santa Cruz, where he was studying financial technologies as part of a fintech research program he helped build there. One day in 2010, an undergraduate student walked into his office to make a case for a term paper on bitcoin.

“I thought it was interesting so I bought a few [bitcoins], and then just kind of followed it,” said Lozano. He is especially interested in the blockchain’s potential to erode middlemen institutions. “Banks act like a centralized authority over who owes what to who, and who did what at what time. And we need that centralized intermediary because with digital money, I can just create new money. And if I can just out of nothing create money and spend it, the very concept of money and value starts to lose meaning.”

But, as Lozano points out, the blockchain protocol itself performs the verification of transactions as it records them, eliminating the need for a centralized authority.

“That’s really important when you’re trying to record and conduct activity, whether it be the production and circulation of news, information, the recording of votes, or identifying transaction history,” Lozano explains.

At forty-one-year- old, Lozano is also the CEO of The Small and Medium Business Exchange (SMBX)—a startup that urges potential investors and businesses to “be the bank,” by taking advantage of direct bond purchase and trading options via blockchain. Although SMBX is governed by the Securities & Exchange Commission (SEC), it still operates independently from other financial institutions, like traditional banks, to issue Title III securities to investors, according to the company’s website.

“Historically, states have had a monopoly over the production and distribution of money,” Lozano points out. “Now you have this new technology that has not only decentralized the power and authority over the consumption, circulation, and production of information, but of money as well.”

Richie Etwaru, author and former professor of blockchain technologies at New York’s Syracuse University, warns that blockchain-based businesses like Lozano’s have the potential to eliminate their predecessors. In his book, Blockchain: Trust Companies: Every Company is at Risk of Being Disrupted by a Trusted Version of Itself, Etwaru discusses why blockchain closes what he refers to as “the trust gap.”

“How do I know the tangerine I buy at the store is organic? I have no choice but to trust the merchant. For all I know, there could be a guy in the back room slapping a little ‘organic’ sticker on every piece of chemical-soaked fruit coming through the back door,” he writes. Etwaru goes on to suggest that blockchain could be used to track and verify the authenticity of most products and services (including produce), and because the blockchain is public, decentralized, and cannot be tampered with, consumers will trust it.

In an economy where more Americans are transacting online, blockchain could serve as a catalyst to drive those figures even higher. Around twenty-five percent of Americans don’t make cash transactions during a typical week, according to a recent study conducted by Pew Research, and forty-eight percent of those surveyed believe online trust will be strengthened in the future.

But finance and cryptocurrency are not the only potential applications for blockchain. Some see it as a society building tool. Authors Michael J. Casey and Paul Vigna, write of a blockchain test pilot put on by The World Food Program at a refugee camp, in their book, The Truth Machine: The Blockchain and the Future of Everything.

“Whenever a refugee spends some level of his or her digital ‘cash’ to buy flour, that transaction automatically registers on a transparent ledger that can’t be tampered with,” they write of the allowances given to refugees at the Azraq refugee camp in the Jordanian desert. “Just as the blockchain-distributed ledger is used to assure bitcoin users that others aren’t ‘double-spending’ their currency holdings—in other words, to prevent what would otherwise be rampant digital counterfeiting—the Azraq blockchain pilot ensures that people aren’t double-spending their food entitlements.”

Of course, trust in institutions is not just limited to the world of finance. Dondrey Taylor, CTO and co-founder of DNN Media, set out to close the trust gap in news by building a blockchain based news network.

“You had rampant fake news being spread through social media, political pandering, and ultimately a growing mistrust in mainstream media reporting—much of which was amplified by misaligned incentives between news organizations and the general public,” Taylor said via email about the whirlwind news cycle of the past few years. “I felt there was really no better time to start a new journey, a journey that will take us from where we are, to right into a decentralized future, where news is gathered by the community, with no influence from the governments, lobbies and advertisers.”

As of now, DNN is still in private beta, but once open to the public, it will operate on a token-driven reward system. “The existing content compensation system clearly isn’t working. DNN’s own digital currency will facilitate the writing and reviewing of content for our digital news platform,” explains Taylor. “Broadly speaking, tokens are digital keys that grant access to a particular service or resource, which has been made possible by the technology that enables the blockchain. The beauty of tokens is that they can be generated by the network, contingent on certain actions being performed; for example, a writer can be rewarded in DNN for a piece that is deemed transparent by the community. Similarly, reviewers can be rewarded in DNN for critiquing an article impartially.”

Blockchain’s permanence and immutability make it the ultimate weapon to combat fake news, according to Taylor: “Although blockchains and their associated token economies are still seen as yet to be proven, they are all here. In the not too distant future, this new technology will allow each and every one of us to change the way we consume our information.”

But will it stick? Will blockchain be the next “big thing?”

“It begins to be a question of faith and investment into a technology,” says Monreal. “The technology has great potential and it takes a lot of skill to architect and code in terms of blockchain and it also requires a lot of knowledge and experience just to be able to talk about what it actually is.”