The Way Through West Portal 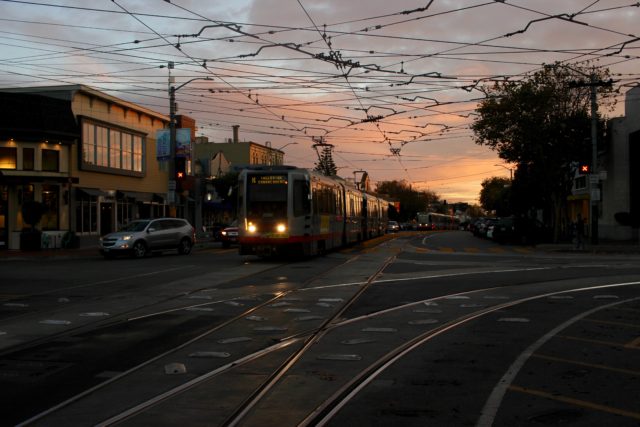 The studio version of Taylor Swift’s “End Game” credits three vocalists, but this particular performance was accompanied by a backing track of the dull humming from a half dozen industrial sized fridges. Occasionally a MUNI bus, train, or people in mid-conversation pass by the open front doors, adding their own notes to the symphony.

POP. The rhythm is broken.

It was his first day working at Eezy Freezy, a privately-owned grocery store in San Francisco’s West Portal neighborhood, and the frozen burrito he had placed in the microwave under the checkout counter was now more on the walls of the microwave than inside its wrapper. Fortunately, the customer who has purchased the burrito was in no rush.

Adorning the walls above the counter, in late September, were both Christmas lights and plastic spiders. The employees laughingly describe the decorations as much of the time being far too late, or far too early. But for brief periods of time every year, they are right on time.

A few other customers wander in. They’re all greeted with a hello, and bid farewell with a thank you. It’s lunch time, and as such they purchase candy bars, sodas, and packs of American Spirit cigarettes to supplement their meals.

Friendly, personal, local. It’s the perfect picture of a long standing community grocery store. But Eezy Freezy, like many businesses in West Portal, is deep in a recovery process after a disastrous summer of business due to SFMTA construction descending on the neighborhood for two months. 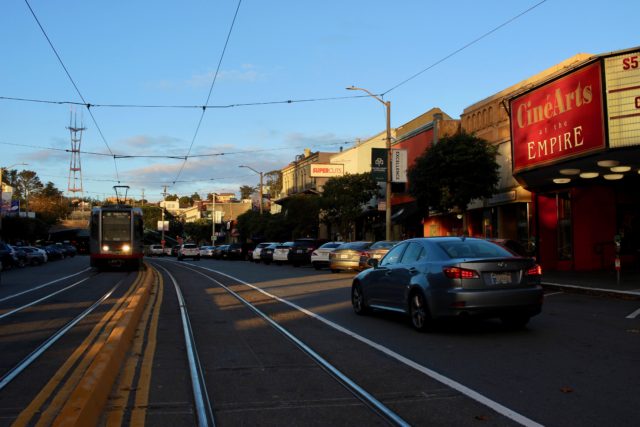 On June 25, 2018, the San Francisco Municipal Transport Agency closed off the Twin Peaks Tunnel for construction. The primary goal of the project was to update the infrastructure within the tunnel including new tracks, drainage systems, walls, and seismic reinforcements. These were stated to lift the speed restriction the trains were under while in the tunnel and to ensure the tunnel is able to continue to operate safely and reliably.

Much to the satisfaction of several businesses around the West Portal station, the construction was completed on time and normal service resumed on August 25. However, those two months were more than enough to put the hurt onto businesses like Eezy Freezy. 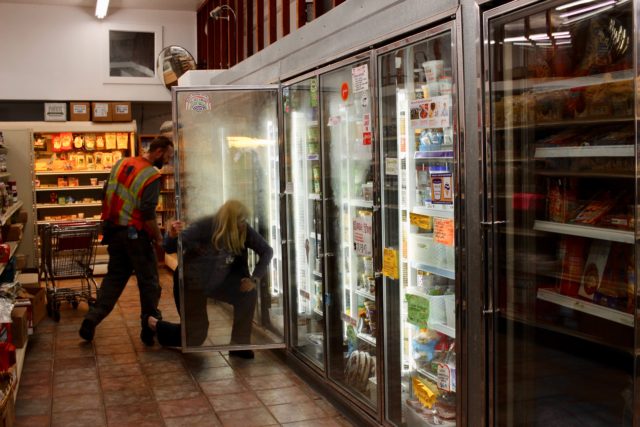 Management at Eezy Freezy estimates that they lost half of their business. Like many of the stores on West Portal Avenue, Eezy Freezy enjoys many of the benefits of their location. Situated in the center of several residential neighborhoods, wide streets with ample metered parking, and a hub of public transport all ensure that foot traffic is high and consistent throughout the year.

But this past summer, West Portal Avenue more closely resembled a war zone rather than a bustling business center. The Northbound side of the street was completely blocked off, large construction vehicles dominated much of the available road, dust blanketed everything, and the sounds of construction were a constant annoyance. Between the train lines being rerouted around the city and the large debris shields placed in front of businesses, the amount of available customers dropped dramatically and those who were still there often couldn’t tell that the shops were still open.

Eventually, large signs reading “businesses open” were placed on the debris shields. But they did little to improve business. Eezy Freezy often services commuters who stop in to pick up a few ingredients to cook for dinner that night, or rather something frozen to throw in the microwave. Burrito Loco, a Mexican restaurant which is actually attached to the West Portal station, has a rush of orders every night from commuters who get off the trains to pick up their burrito before completing their journey home. Without the trains running, Burrito Loco estimates they lost over fifty percent of their business as well.

And these losses were very predictable. According to figures published by SFMTA in their 2016 customer satisfaction report, the K, L, and M lines that the construction shut down at the West Portal Station are the three lines with the most regular users in the MUNI Metro system.

MUNI passengers were interviewed and asked which line they used most often. The K, L, and M lines accounted for sixty-four percent of the MUNI Metro responses. And when the MUNI Metro system services an average of weekday 173,500 riders, that means roughly over one hundred thousand potential customers per weekday were taken off those lines.

Hundreds of Spongebob toys adorn the right wall of The Music Store, another longtime business on West Portal Avenue. The toy collection began when an old employee started hanging them to amuse his child. It has only grown since then. Sitting just below the toys are rows and rows of pornographic DVD cases, the covers depicting images certainly not suitable for all ages.

The remainder of the store is packed with metal display cases, some deep enough to keep vinyl records, others shallow to hold CDs. The walls, windows, and ceilings all serve as displays for classic album art and flags showcasing famous musicians. A bucket next to the checkout counter haphazardly displays VHS tapes. And behind the checkout counter stands Shelby Ash, deep in conversation with a regular customer. 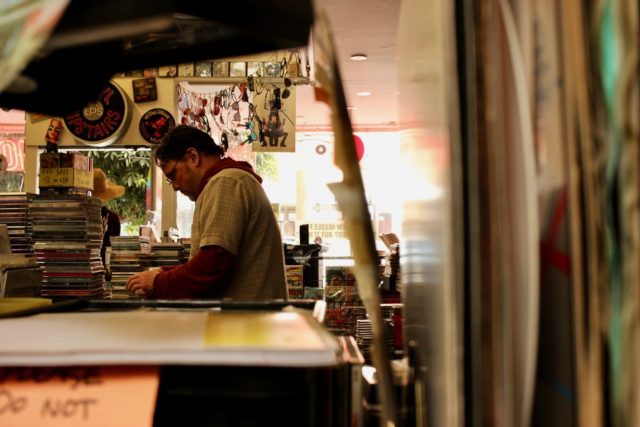 Like many of the businesses on West Portal Avenue, The Music Store opened its doors decades ago. Its founder, owner, and current sole employee, Shelby, has been there the entire time.

The Music Store is one of a few businesses that was not hit particularly hard by the construction. Joining them is Bookshop West Portal, just next door, and CineArts at the Empire, a movie theatre across the street. The location of these businesses kept them far enough away from the worst of the construction, although it was still certainly noticeable.

“Oh, every customer who came in commented,” Ash said, while moving a stack of CDs. “But perhaps surprisingly we don’t rely too much on new customers. People tend to come here specifically.”

Managers at Bookshop and CineArts confirm this sentiment. While many of the restaurants on West Portal Ave. certainly become neighborhood favorites, they benefit from the influx of commuters much more heavily than shops, especially in these cases where the businesses have become so tied into the community. The Music Store hosts music lessons on its premises, Bookshop invites local authors to hold readings in the store, and CineArts is the closest movie theatre for the West Portal and Forest Hill neighborhoods.

The impacts of the construction were felt. The dust and noise forced them to close their doors during the day, preventing some customers from realizing they were open, and discouraging those who did from browsing for extended periods of time. However, in comparison to the restaurants, the effects were minimal due to the strength of their customer base.

It was local, regular customers who allowed some businesses to continue to thrive, and who kept many others afloat during the construction.

“Order out for delivery!” shouted Erika Williams, as she leaned over the counter and slapped the top of a silver call bell, ringing out a pure note. She grabbed a menu and shuffled over to the front of the restaurant. “Two for lunch?”

Clad in a black button-up shirt and apron, Erika got into the high pace rhythm of work at a restaurant during the lunch rush. The particular restaurant is Mozzarella Di Bufala. Mostly known as a local pizza place, the menu is completed by an array of Brazilian dishes such as Moqueca de Peixe, a fish stew made with halibut, coconut milk, and an assortment of vegetables.

Other restaurants on West Portal Avenue still have not yet had business return to normal. Eezy Freezy and Burrito Loco both have former regular customers, who due to the change of train routes during the construction got out of the habit of buying from them, and have yet to return. But Mozzarella Di Bufala has returned to full swing. 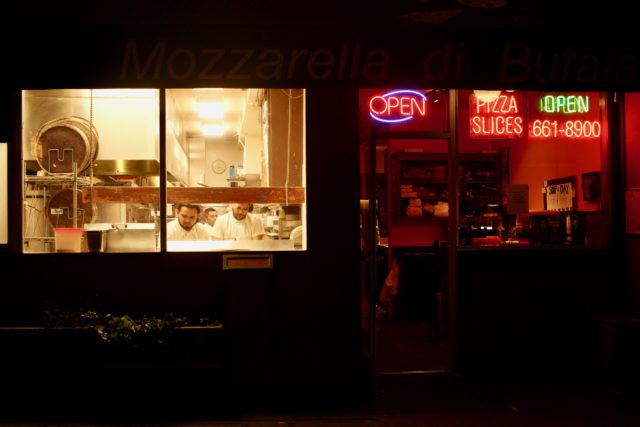 During the construction, the amount of walk-in customers suffered greatly like other stores. Their delivery business was also affected. Delivery drivers coming to pick up pizzas would have to park blocks away due to the road closures, which caused delivery times to skyrocket. After a while, customers simply started ordering elsewhere.

Erika, who has been working at Mozzarella Di Bufala for five years, estimates that during the construction the restaurant lost seventy-five percent of its business.

With three-quarters of business gone, work was excruciatingly boring for Erika.

“There’s only so much you can clean before everything has been cleaned twice,” she remarked. “At a certain point you realize there is nothing to do, so you head home.”

Heading home early means cutting hours. By Erika’s estimation she lost a shift a week during the eight weeks of construction. While other employees were simply not scheduled as much, also losing a shift a week on average. At San Francisco’s minimum wage, that becomes $120 a week in lost wages, or $960 over the two months for each and every employee.

Meanwhile, the businesses were still spending money—paying to put the lights on, keep the fridges cold, and staff their stores. But the customers were simply not walking in.

A dozen people, all clad in high visibility vests, stood around conversing outside the West Portal Station while two more men pulled wires out of a hole in the ground that laid between the train tracks. 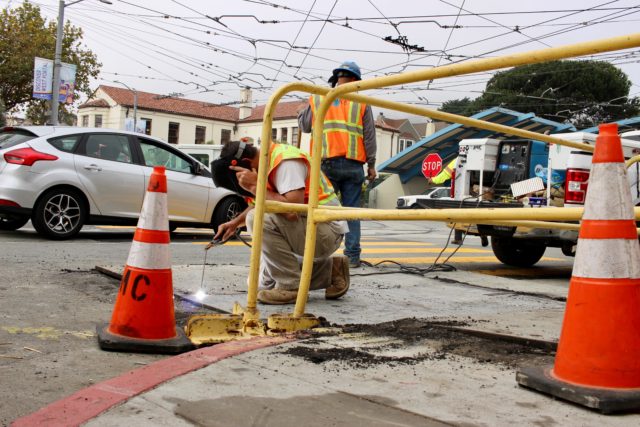 The two men worked in intervals. Stepping out onto the train tracks to examine the wires and attempt to fix the problem. While they did so, the trains on the inbound side the station would be stopped. On West Portal Avenue the trains backed up, waiting. Then men would then step aside and allow a train to enter the station before resuming their work.

The tunnel closure was over, and construction was supposed to be only on weekends. But on this Wednesday afternoon, trains were delayed by more construction.

The previous weekend, during the nighttime closure, the construction crews damaged the automated train control system at the West Portal station. This damage meant trains were being stalled and only able to move through the tunnel at extremely slow speeds, causing significant delays.

This incident is just one mark on a list of problems with the Twin Peaks Tunnel construction. Foremost on that list is the death of a worker when a beam fell on him in the tunnel this past August. It was then later revealed that the construction contractor, Shimmick Construction, did not disclose their history of safety violations to SFMTA.

Records show that over the last decade Shimmick has had nearly fifty safety violations, including another death of a forklift worker.

The issue that caused much of the grief for the businesses in West Portal was the use of staging areas for the construction. Originally, the SFMTA planned to stage the West Portal side of the construction on Junipero Serra between Sloat Boulevard and Ocean Avenue, meaning that construction vehicles and materials would have been stored on that street. It’s nearby, and that section has no businesses or homes on it. So while it would have blocked some parking spaces, no homes or businesses were going to be blocked in.

Instead, during the summer, the businesses on West Portal were in fact blocked in. The streets were closed off and construction vehicles and materials took over the road. It’s a point of contention for many business owners and they have been trying to find a time to meet with someone from the city.

But as of now, no audience has been found. Many business owners are considering filing lawsuits against SFMTA for their mismanagement of the construction. SFMTA has yet to comment on this story

Without lawsuits or an audience, there may be no resolution. The businesses survived, and they may just have to recover their losses the hard way.