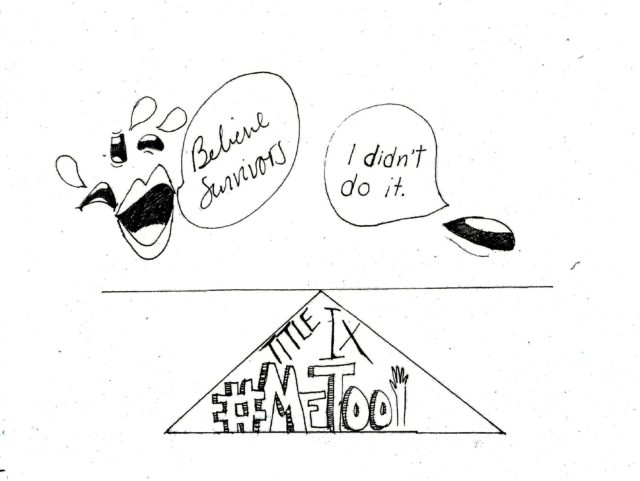 In October, Supreme Court nominee Brett Kavanaugh was inducted into the highest legal body in the country. But at SF State, the message is quite different: “Fuck Brett Kavanaugh.”

The words were spelled out with sticky notes in a dorm window. The school’s women and gender studies department is sending letters to thank Kavanaugh’s accuser Christine Blasey Ford for coming forward. In these ways and others, this campus shows that support for victims has come in from millions of people victims.

“On our campus, we have definitely seen an upsurge both last October and this year in individuals coming forward as a result of the public attention and social media dialogue about this critical social justice issue,” says Luoluo Hong, Vice President and Title IX Coordinator at San Francisco State University.

According to the Maryland Coalition Against Sexual Assault (MCASA), only 15.8 to 35 percent of all sexual assaults are reported to the police. Reasons that survivors give for not reporting sexual assault include: fear of the justice system, fear of reprisal, belief that the police will not help, not enough proof, or simply, that they don’t know how.

“Historically, sexual assault/sexual violence are among the most underreported crimes in the US,” Hong says.

The prevailing “rape culture” that tends to shift blame to the victim and take the seriousness out of the crime has damaged the conversations we have around this topic.

Rape culture, as explained in an article published by Southern Connecticut State University, is an environment in which rape is prevalent and sexual violence is normalized and excused in the media and popular culture.

As a survivor of rape herself, Hong says that she is, “honored and humbled to serve as the campus Title IX Coordinator.” She has also seen a huge shift in how society takes sexual assault as a more serious offense.

So what do various young people around the Bay Area do in reaction to this new visibility?

Twenty-four-year-old Valerie Taylor, of Novato, California, is affected by the results of sexual assault due to both her parents being victims. “They’re super dysfunctional people with pretty toxic habits that seeped into me,” says Taylor. She also says she feels helpless and stressed knowing that there are so many people in her life who have been affected by sexual assault, but there is only so much she can do.

“I think way more people are willing to listen and be supportive,” says Taylor, “Like—way more cishet guys want to learn to be good allies I think.” She says that she noticed this trend way before the #MeToo hashtag blew up, “I don’t think #MeToo would’ve been as heard of if that trend wasn’t already present.”

San Francisco State University student Brenna Hallman, talks about how unsurprised and disappointed she was about the conclusion of the Brett Kavanaugh hearing.

“There’s a lot of discussion about it, but, unfortunately, like most of the people I talked to about it had, they sided with her, but they kind of knew what was going to happen,” says Brenna.

She believes that if Kavanaugh wasn’t given a seat, that that could have been what would have shifted our culture more toward supporting victims. Hallman still fears that most sexual assault victims will not get the justice they seek, but she does say that she notices a difference in how many people try to bring light to this issue, “I see a lot of postings about [sexual assault], there’s protests going on, and there’s people trying to still make a difference about it. People are still very angry,” she says.

While recent movements such as #MeToo have seen predators getting punished for their actions—Bill Cosby, Charlie Rose, and Harvey Weinstein to name a few—Hallman still thinks that it could have been dealt with years, or even decades ago. “How many women did it take though? It just got discovered now, that’s my point. Is the limit like, you have to assault like five people before you get caught?”

Chabot College student, Diba Gordafkan, says that she has noticed a difference in our culture: “After the Kavanaugh hearing, I actually came out and talked about my story.” She also says that the reports will increase over time, but we still need to get over our willingness to move past the stigmas and blaming that victims get. “The stigmas around sexual assault victims is what kept me from talking about it all this time.”

Gordafkan says that she is part of the Intensive Outpatient Program (IOP), a program that teaches people about mental health and how to deal with various mental illnesses such as PTSD and other traumas. However, when she came out with her story to her peers at IOP, she received a less-than-welcome reaction.

Even with what she experienced with how people around her handled her coming out, Gordafkan still believes that people will continue to come out and speak out about their injustices. “People consider the idea that men can now be sexually assaulted. I’ve noticed my guy friends talking about what happened to them, and I feel like just ten years ago, that sort of thing would be kept a secret.”

Cristian Marcos talks about how the increase in discussions about sexual assault has given him the courage to speak about his own experiences. “The fact that I see that someone else is concerned about my experience, makes me wanna stand up about it, you know?”

In the past, Marcos was scared of what people would think about him being a victim: “It’s something that I had trouble trying to come out with—people are constantly getting judged, and that’s what scared me.”

He still believes that we have a very long way to go before all victims will feel free to speak up about the injustices they experienced. “I don’t think they will be totally in secret anymore, but there are still times, when someone speaks up, and nobody does anything about it.”

There is increasing energy behind this movement. With powerful people being taken down by their victims, we might see sexual assault crimes going from one of the most underreported crimes to one where most, if not all, victims can feel like their voice will be heard. There are still tons of bumps we need to go over. It seems like some people can shrug off sexual assault accusations like nothing, victims can still become ostracized in their social circles. Male victims are still judged or ridiculed for speaking out about what happened to them. There are cases where victims are still being revictimized. As we continue to move forward, we can hope that the increase in visibility, and how seriously we view this crime, will move us to a society where all victims can feel safe among their peers.