Diversity in the Great Outdoors 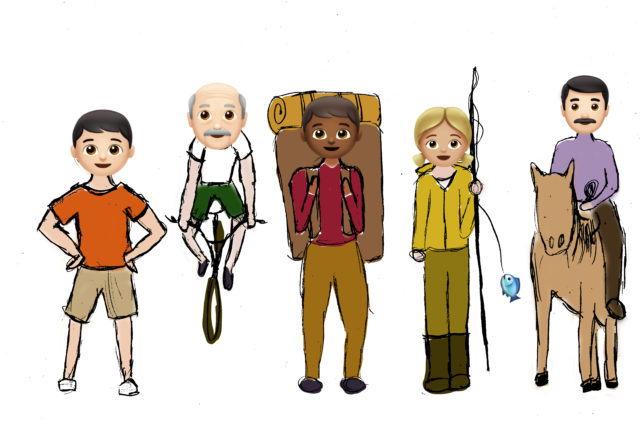 Nina Roberts has spent much of her career ensuring that there are a greater number of opportunities for the involvement of women and girls in the world of outdoor recreation—a traditionally male-dominated community that includes hikers, campers, and others who see the outdoors as a source of adventure.

But as Roberts began to see an increase in the number of female members of this community, she recognized a different problem: There remained a distinct lack of people of color in the backcountry.

“With a white father and a mixed race mother—Indian and West-Indian—the racial piece didn’t matter to me as much,” said Roberts, a professor of recreation, parks, & tourism at SF State. “‘My father’s a white guy, there’s white men leading my programs, that’s the way it is.’ I never questioned it. That’s just what I got used to as far as tradition.”

Land agencies have long conducted research into visitor use and non-use in an effort to make public lands more accessible. In 2016, the San Mateo County Parks Department conducted one such study, which Roberts worked on, along with Patrick Tierney, also a professor of SF State’s recreation, parks, & tourism department, and Ruby Turalba, who teaches in the department of health education at SF State.

While the participants of the study were generally satisfied with their experiences at the parks, some barriers remained. According to Turalba, some of the participants agreed that having bilingual park staff would help with communication with visitors. And the study also found that transportation to the park proved an obstacle for some.

“These areas are not like city parks where there are paved trails and restrooms everywhere,” Tierney said. “These are more remote. They require a little bit of experience to know what to expect—although anybody can show up for the first time and have fun.”

According to Roberts, there are differences in how a culture responds to certain outdoor activities. Latinos, for example, may see a park as a source of fun and entertainment for families during the day but might be hesitant to go camping, she said.

“As far as camping and the types of activities, that goes back to, often times, historical components of: ‘My people, or my community, or my grandmother, or my great aunt—we worked on the land, we slept on the ground but it was not leisure for us. It was not enjoyable, so why are you doing that?’” Roberts said.

Ravi Lau is the Bay Area program manager for the Student Conservation Association, an organization that hosts programs that help connect youth to the outdoors. He said that representation is important in the leadership of such programs.

“The challenge that happens a lot in our field—with regard to people of color feeling more comfortable in the outdoors—is that sometimes the folks facilitating that experience, like the crew leaders or the recreation leaders, don’t have the cultural competency to make everybody feel included,” Lau said.

In talking about the solutions to make parks more inclusive, Roberts sounds optimistic. She said there are a greater number of opportunities for young people to get involved in outdoor recreation and park staffs have become more visible in the communities they serve.

While many visit parks to walk or exercise, the 2016 San Mateo County Parks study found that some visit parks for “positive emotional health and stress reduction.” Others visit to meet with friends and family.

“During some of the focus groups, individuals mentioned how getting together in these outdoor spaces are ways to bring their communities closer,” Turalba said. “For example, one organization that we talked to talked about how they have church barbecues out in these beautiful spaces—and it allows for them to not only socialize with each other and worship together, but it also provides time for recreation as well.”

Some members of the outdoor recreation community seems to have seized upon this idea. Organizations, such as Outdoor Afro and Latino Outdoors, help communities of color to recognize the importance of environmental conservation and help to grow their relationship with the outdoors.

“It’s kind of hard to care about something, like an outdoor space, if you don’t have a relationship with it—if you haven’t been there or been to a place like it to understand the value of it for yourself and your community,” Lau said.