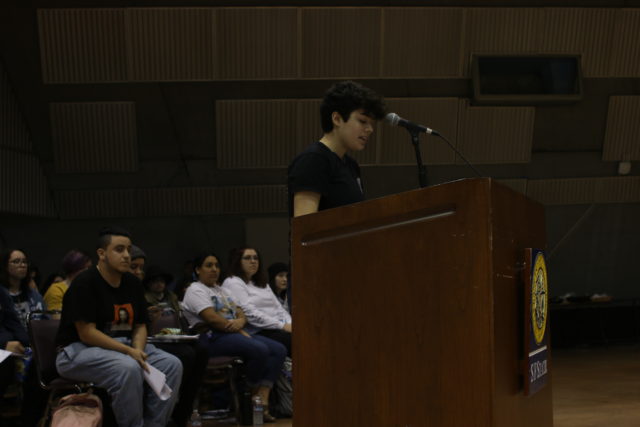 “I am here because I am the person identified in the crime bulletin as a ‘Hispanic transgender female,’” Angelisa Pantoja declares into the microphone, dark eyes trained on the Board of Associated Students.

She stands firm in the middle of the room, defiantly staring at the SF State staff and student staff members during the public comment section of the Associated Students meeting. Pantoja appears poised and confident as she grasps the podium, her short curly hair bobbing with her head as she addresses the room.

Behind her, students crowd the first few rows of chairs set up in Jack Adams Hall. The students in the front row have their eyes on Pantoja, and are present in support of her story and a mission.

The eighteen-year-old freshman does not identify as trans, but rather a bisexual cisgender woman.

On December 4, the University Police Department Chief sent out a crime bulletin email to all enrolled students. The email contained a crime report of an assault with a deadly weapon, allegedly a machete, that occured on campus, and one of the two suspects was described as a ‘Hispanic transgender female.’

“They called me a dyke,” Pantoja says of the altercation that led to the crime bulletin. “I’m not some killer person just because I look both masculine and feminine.”

According to Pantoja, she was being harassed on campus by a group of men who insulted and physically intimidated her because of her masculine appearance. She became the labeled subject in the university police report.

Both parties in the aforementioned crime report were not identified by name or publicly outed. Pantoja came forward willingly, after seeking out a student organizer who sent out papers around campus advocating for action.

Flyers appeared in school buildings and around campus the next day following the email, calling for students to organize action against the VP Office of Student Affairs, the University Police Department, and the Associated Students board.

“A CALL TO ACTION: DECRIMINALIZING TRANS BODIES @ SFSU” read the first batch of flyers. The second: “WHY IS LUOLUO HONG USING POLICE TO INTIMIDATE TRANS* STUDENTS? PROFILING IS NOT THE ANSWER.”

Trans students and allies alike sit and wait behind Patoja as they wait for their allotted two minute time slot to tell the board how they feel about the language used in the email and how it continues to perpetrate criminal stereotypes about trans and LGBTQ individuals.

Tommaso Lillo, a fourth year psychology and LGBT studies student, opened the floor of discussion at the Associated Students meeting. They use gender neutral pronouns.

“Keanna Mattel, a trans woman, educator and activist, was found dead on December 7th by gunshot in Detroit, Michigan, was misgendered and misidentified by the Detroit Police Department who found her,” they said loudly and clearly, for everyone in the room to hear.

“This was the same day, SF State’s Vice President’s Office of Student Affairs chose to let this campus’s University Police Deputy Chief reach out to the trans* and ally populations on this campus who were in unrest over the criminalization of trans women and femmes of color,” Lillo finished, eyes flitting over at Vice President Luoluo Hong and the other board members.

The main problem about the crime report, as addressed by Pantoja and Lillo, was the profiling it perpetrated by describing a person as transgender. Trans identity is not something clearly visible, and must be expressed by the person directly.

During the nearly two hour session, students lined up at the podium for their turn to address the board members and the vice president of student affairs about their concerns about on campus safety and practices about LGBTQ individuals.

Luoluo Hong apologized to Pantoja, and went back and forth with fellow board members and students over the issue of sending another email as a means of public apology on the same forum that the initial crime bulletin was sent.

A few students during the course of the public comment section raised questions about the increased presence of police activity on campus following this incident, as well as police practices and training.

This is the kind of topic that Dilara Yarbrough, an associate professor in the criminal justice department at SF State, studies for a living.

She sits primly at her office desk, but her hazel eyes are soft with concern. Trans and gender nonconforming individuals facing discrimination in multiple forms is one of the main structural themes she has been pursuing in her research.

“When I think about factors affecting the discrimination of trans women, I think about policing practices—policing of identity and resources,” Yarbrough says slowly, but meaningfully.

For years, Yarbrough has worked beside numerous organizations, such as the San Francisco Coalition on Homelessness and the TGI Justice Project. She is in the midst of writing academic articles such as “The Carceral Production of Transgender Poverty: Theorizing Intersectional Vulnerability.”

According to Yarbrough, increased policing of certain individuals can add to other factors like poverty and homelessness, and consequently, lead to incarceration.

Every Tuesday evening, TGI Justice Project props open its doors in the Tenderloin and invites family and strangers in for a weekly tradition, all in the name of helping transgender individuals through the carceral system.

It’s mail night at the Trans Gender Non Conforming Intersex Justice Project, where it is just as much family time as it is serious business.

Every day and every week, incarcerated individuals from all over the United States send in letters to the TGI Justice project, seeking out emotional support, legal resources, and advice. And every week, volunteers, employees, and people who have made their home here gather to write handwritten letters of empowerment, resource, and resistance.

Miss Earl is running the show today, smiling warmly at every new and familiar face that walks in, and clapping out small applauses every hour in a show of support for everyone working through the stack of letters. She is a tall woman of color with a wrap tied tautly around her head.

TGI Justice Project is in a building filled to the brim with files and files of legal resources like how to get a legal name and gender change, trans-friendly health services, and services that can help within the prison system.

The organization’s goal is to be a support system for struggling trans, intersex, and gender non-conforming peoples, inside and outside of the carceral system.

Back at SF State, Pantoja is feeling good about the outcome of the Associated Students meeting and the support she has received from the LGBTQ community on campus. She will be in communication with Hong and a few other board members about a public email apology and handling the crime report incident.

“Coming from a small town, I didn’t expect the support I’ve got today,” she says, smiling broadly.

Sam Sotomayor, a student attending the Associated Students’ meeting, felt disappointed in the university as a whole, that SF State did not meet the standard of inclusivity and support that she expected of living in San Francisco.

“I will stand behind and support my trans brothers and sisters,” Sotomayor said dedicatedly, before she swept out of the room with the rest of the students.