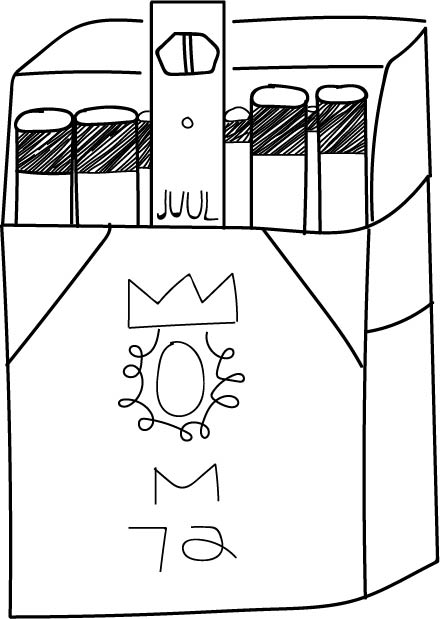 Slouched on a few chairs outside of the empty shopping center, a group of young men sat laughing, cracking jokes as people walked past them. Smoke filled the air around them in heavy grey-white clouds.

“Here,” said one of them as he handed a small, black vape pen to his friend sitting next to him. “Just try it.”

“I don’t even know how to use it,” he said, staring at the vape, faded from use and covered in stickers.

“Just take one hit,” blurts out a third friend, leaning over to watch the boy fill his nostrils and air around him with the thick clouds of smoke.

Smoking culture is just as prevalent as it always. Though cigarette usage has waned among adults in the last decade, the amount of youths using electronic cigarettes has risen, according to a report by the Center for Disease Control. The result is a new generation still addicted to nicotine, as younger people are using vape pens.

“I was about fifteen or sixteen years old when I started smoking,” describes twenty-five-year-old Parker McDaniels, “I would have either older friends or random guys at the gas stations buy cigarettes for me.”

McDaniels recalls falling into peer pressure from his friends. Smoking, though harmful, was the cool thing to do with friends. He is actively using a Juul, currently the most popular e-cigarette, to wean himself off tobacco cigarettes.

“My first e-cig I purchased at a smoke store, underaged I just walked in and got it,” says Isaiah Angeles, now twenty-three. “They did not ID me back then.”

Isaiah Angeles began smoking cigarettes at the age of seventeen with his friends. Smoking became routine for him. Although the law required being eighteen years old to purchase nicotine products, Isaiah says it was as easy as walking in and handing over cash to pay.

“A misconception I think of is that some say vaping isn’t bad, when in reality it is,” asserts Angeles.

Though e-cigarettes, which use a current to vaporize a liquid typically containing nicotine, have been shown to help adults transition away from cigarettes, they still pose health risk for youths. According to the U.S. Surgeon General, nicotine usage can inhibit brain development in people younger than 25. Moreover, a young person who regularly smokes e-cigarettes like Juul are more likely to smoke tobacco cigarettes in the future.

One of the most dangerous parts is how easy they are to smoke.

“It’s not flavorful, they pack a strong, smooth, nicotine punch,” describes Jose Trujillo, a twenty-one-year-old, who sits outside, smoking. As he takes another hit from his pen, he lets the smoke fill the air once again. “It’s like a slightly sweet and cool hit with a cigarette tickle on the throat from the nicotine.”

In 2017, Juul Labs was founded, claiming to be the next smoking alternative for people who were looking to quit cigarettes. The liquid used in Juuls typically contains between three to five percent nicotine—enough to make one cartridge equivalent to an entire pack of cigarettes.

“I buy the 5 percent cartridges, which is the highest percentage is goes, because that’s what works for me,” explains McDaniels.

The sleek design and portability of Juuls have attracted many new smokers, many of them young adults. In a survey conducted by The Truth Initiative, an organization aiming to decrease tobacco use, it found that an eighteen percent out of 1,000 young adults said they had seen Juuls being used in school.

“I think laws should be stricter with nicotine and tobacco products,” says Trujillo, “The cool kids are trading their cigarettes for vapes with the unknown long term effects of it.”

“Most of my friend group Juuls now instead of smoking cigarettes,” says McDaniels with a shift in his voice, “I don’t encourage any someone to start smoking, maybe I’m just being biased.”