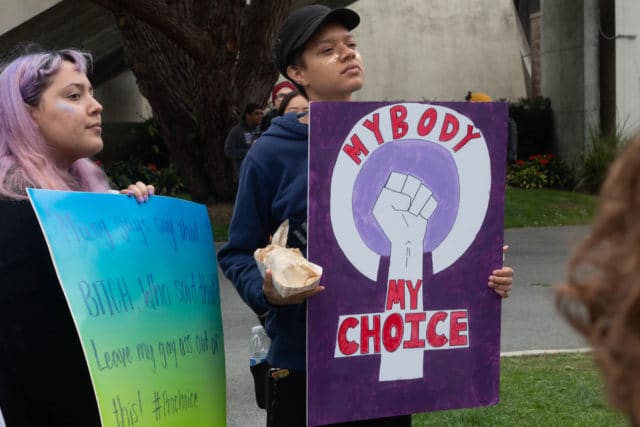 The Monday morning pro-life advocates came to campus, I got my period. I had been anxiously awaiting its arrival for the last two weeks, and smiled as I looked down at my bloody underwear. I am an unwed, twenty-four-year-old living at home trying to finish my bachelor’s. I am no one’s idea of a mother. But I would not have to make that decision today. As I stepped out into the quad and threw away my tampon wrapper, there it was. A looming, hexagonal display of death, gaslighting, and guilt.

Images of fetuses, ranging from ten to twenty-two weeks, are blown up to the size of adults on tarps on poles and neighbored with archive pictures of Holocaust victims, Jim Crow lynched bodies, and the Rwandan genocide. There are police officers everywhere, standing under trees in twos and threes with arms crossed. The pro-life advocates are shockingly average people. You would see them in line at the grocery store, or the farmer’s market. There are GoPros on tripods set up in a perimeter, facing the tides of students. When asked, they give fake names, as our Golden Gate Xpress staff have debunked. Some of them hover around the perimeter of their banners, protected by metal roadblockers, beckoning to whoever will listen and passing out pamphlets. You wouldn’t be able to hear them, however, over the screaming of our student body.

“You should be ashamed of yourselves! You’re a fucking disgrace!”

“You’re living in a liberal bubble!”

That’s a fair point. San Francisco is not the Midwest, the South, the East Coast, or even like a lot of the rest of California. San Francisco State is a campus that has suffered violence and starvation for the well-being and education of its students, so why would we let Evangelical-backed go about their business?

Some students claimed the group, Project Truth, was violating the First Amendment. As many valid points were made about the use of triggering pictures of aborted fetuses and the allusions to white supremacist movements like Nazi Germany and Jim Crow laws, these people are entitled to their right to tell this to us. They were called slurs, expletives, and derogatory names, and they paid to be here. A vast majority of students were opposed, offended and enraged.

It is, unfortunately, their First Amendment right to speak their minds, and our campus allowed them the space to do so.
At the time of writing this, it is Wednesday, April 17, the last day they were scheduled to protest for an alleged eleven hours a day. On Monday they took it down before the 4 p.m. rain, and on Tuesday they were gone by midday, replaced by three separate inflatable obstacle courses for the students. Were they for us as a reward for our activism or a consolation prize to our trauma?