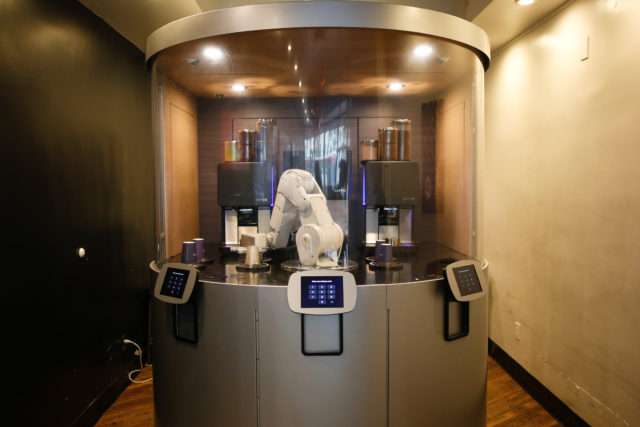 On Market Street in San Francisco near the Montgomery BART station, there’s a tiny, sleek storefront with a black sign reading “CAFE X.” It blends in with pretty much every other piece of brutalist, almost oppressively gray concrete architecture around it. At first glance, it looks like its almost hiding from the towering skyscrapers that are ever so common in this part of the city.

But inside, it’s a very different story.

The small storefront has two large televisions plastered on it and two short kiosks that stand diminutively—their screens prompting people to customize their drink. Unlike most coffee shops, there aren’t that many people inside, nor are there many people working inside. Instead, the people that would normally make the coffee at this shop are replaced by a white, robotic arm that waves back at customers when they look at it. People go up to the kiosks, pressing through a cavalcade of options for customizing drinks: three different types of coffee bean options, oat milk, or organic cow milk, a size for your drink, and a choice of extra flavoring. Like every other tech company from Silicon Valley, there’s also an app to mobile order if you want to avoid the wait.

Cafe X is one of a few businesses looking to further automate the restaurant industry, although it still relies on some human involvement. Sam Blum, marketing and communications manager for Cafe X, explained that human involvement is used to create a certain atmosphere within the shop, and still has workers that restock items such as plastic lids and napkins inside.

“By automating the highly repetitive tasks in the beverage making process, our team of coffee bar specialists, who work at our locations, can focus on coffee education and customer service,” Blum said. “Similar to high-end retail, providing the best possible experience not only for customers who are getting beverages to go but also for those who wish to stay. We staff all our locations.”

“At Creator we are able to spend much more on the cost of ingredients than other restaurants at our price point, and scale up advanced culinary techniques that are nearly impossible by hand,” said Steve Frehn, co-founder of Creator with Emunah Hauser, their communications manager. “This means we’re making it more accessible for more people to support ranchers and food producers who are doing the right thing—and making these high quality ingredients and culinary techniques available to more people.”

But what about scenarios in which human involvement might not actually provide more benefit? Most people would point to a vending machine, but most vending machines don’t usually dispense full meals. That’s where a company like Redwood City’s Chowbotics has decided to focus its business. Chowbotics specializes in vending machines (they’ve named theirs Sally) that make prepped salad or rice bowls with other pre-sliced ingredients. Unlike competitors such as Cafe X, Chowbotics seems to have focused much of its marketing material around healthcare for businesses rather than hospitality.

When asked about the impact of automation on labor, Baratzadeh stressed that there still needs to be human involvement at some point, especially when it comes to stocking the Sally vending machines with precut ingredients.

“Our robot really enhances the production of customizable meals, but it doesn’t replace the human element,” Baratzadeh said. ”You still need to chop and prep and cook the food, but it allows you to have someone put together their own food.”

Outside of the healthcare fields, there’s also potential for the use of automation when it comes to food safety. For example, Jeff Clark, a food safety researcher at the University of Arkansas, recently wrote for Food Safety News about the potential of automation to make food service safer. Clark notes in the article that “human hands have an instrumental role in contributing to risk of foodborne illness transmission and foodborne illness outbreaks,” with much of the risk relating to the inconsistency of hand washing.

“The idea is that a large number of foodservice health outbreaks are human errors,” Clark said. “The idea being that automation will maintain that is more difficult to maintain with humans.”

However, Clark still believed that there is still the need for humans, and that jobs aren’t necessarily just going to disappear with the rise of automation. And such belief seems to check out, according to statistics from the Brookings Institute, an economics and policy focused think-tank, which found in its recent report on automation and artificial intelligence that automation would have a fairly high impact on food service compared to other types of jobs.

“We find that food service occupations tend to be some of the most exposed to potential disruption from labor-saving technologies, with even the least exposed job in the group—chefs and head cooks—having an above average automation potential of 53.7 percent,” said Jacob Whiton, one of the report’s co-authors.

Furthermore, it’s usually more repetitive tasks that are more conducive to automation, but that hasn’t necessarily stopped its use in serving food.

“Back-of-house jobs like line cooks and dishwashers are the most at risk, which makes sense given that common tasks in these occupations tend to be fairly repetitive and routine, and are therefore more amenable to replacement by robotics,” Whiton said. “That said, wait staff and counter attendants too are ‘high risk’ by our reckoning, meaning that more than 70 percent of tasks in those jobs are potentially automatable.”

Clark cited a 2015 report from Massachusetts Institute of Technology professor David Autor to say that there was historical precedent to the idea that automation wouldn’t necessarily replace workers, but that they’d be needed in different places. For example, Clark cited an example of the fear of automation taking away textile jobs in the 18th and 19th century, where the ratio of population to jobs increased, and there were eventually more jobs and less people to fill them.

According to Michael Chui, a partner with the McKinsey Global Institute, a consulting firm that analyzes management decisions, one of the best ways to mitigate automation’s effects is to retrain workers.

“Number one is making sure that, if you believe that there will be enough work to do but that type of work will change over time, and that if activity changes, then how do we put resources such as money, courses, time, and support in order to help workers develop the skills of the future, so I think that’s high on the list,” Chui said. “Along with that comes a whole bunch of other things to worry about: If I’m spending hours learning a new skill, how do I make sure I have enough money to feed my family?”

The rise of automation in labor will still take time, further according to Chui, and as such, concerns about automation taking over labor might be overblown. Chui used the widespread growth of technology adoption like the personal computer, which didn’t necessarily wipe out certain types of jobs such as bookkeeping and typewriter manufacturing in an instant when it was first introduced. Chui believes that the sentiment could be similar for automation and labor.

“It’s because we’re people. As a result, we think it’s important to take time seriously. It would take years, it doesn’t happen overnight.”