Does social media harm us? 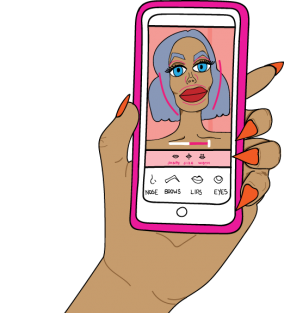 From the time we wake up to the time we lay our heads at night we are bombarded by filtered vacation photos, edited engagement pictures, blurred selfies and sometimes news. Social media has become the center of the world.  It can be hard to weed through what is real and what is fake — which can take a toll on our mental health.

With apps like Facetune anyone can easily edit their photos to look like anyone they want. Social media networks have become a platform for instant gratification or dissatisfaction. According to statistics from the Pew Research Center, photo-sharing applications Snapchat and Instagram are most popular with 18-to-24-year olds.

Christopher Clemens, Ph.D., is a San Francisco State Broadcast and Electronic Communication Arts professor and studies the impact of media on people’s beliefs, behaviors and emotions.  He stresses the importance of knowing the effects social media can have on a person, for better or worse.

“The positive, we are more connected specifically through social media. You can find social support when no one is there … The negative effects tend to be the most popular to research like self-esteem issues, body image issues,” Clemens said. “It can affect how people think about politics. It can influence how people think about their own life, their own gender, their gender identities, sexual orientation, it can influence just about everything. In addition to other things. It’s not the only factor that influences people’s attitudes toward these behaviors but it is  a factor.”

When you can flatten any bumps or lumps, smooth out any lines and cinch in your waistline it can seem to become normal. Perfection is unrealistic but yet we are all striving for it.

Facetune is the number one app in the photo and video category in Apple’s app store.

Diana Garber is a psychologist based in San Francisco, whose work provides insight into what underlying effects social media can have.

“I think social media just really sort of exacerbates and makes everything look larger in a way that we couldn’t have 20 years ago,” Garber said. “So, 20 years ago if you were having a bad day you could have imagined what other people were doing but you couldn’t turn on your phone and see them at a party in the Bahamas, at the spa in a bathing suit, that they lost 15 pounds, and [you] perpetually feel negative about yourself in the moment.”

Growing up in Michigan, Jezlan Moyet always dreamed of moving to Los Angeles to become a talk show host. As a child she would play talk show host with her best friend in the basement using her dad’s video camera. Today she is a social media influencer, model and talk show host on Good Morning LaLa Land and knows first hand the highs and lows of social media. As of the publication of this article, she has over 11,000 followers on Instagram.

“It is really just a way for me to build my community, share the content I am creating whether its from a photo shoot as a model or from a talk show or from the red carpet when I am doing the interviews,” Moyet said. “It is really just another area of distribution from the content I am creating and to be able to have an engaging conversation with the people that are watching.”

She finds enjoyment in the fact that her social media accounts allow her to be able to speak back to the people that are watching which is something television lacks. But with the positives there are also negatives to being so public on social media.

“It is almost a shame the negativity that social media can foster,” Moyet said. “Whether it is comparisonitis that you have with yourself compared with somebody else’s success or the insecurity that it might trigger in someone else who is watching you. It’s really just been a challenge for me and my community to really make sure we are celebrating our successes and not comparing to anyone else because we rise together.”

Countering the negativity that social media can bring, Moyet has been able to stay positive by not taking anything to heart and recognizing that it is not personal.

“Really just recognizing if there is the negative comment or the haters, the best way to address them — cue the Taylor Swift song “You Need To Calm Down,” Moyet said with a laugh.

Being a social media influencer, she recognizes there is a responsibility that comes with it — to be authentic in a world that can be hard to decipher between real and fake.

“It is easy to hide behind filters or Facetune and I don’t want to do that,” Moyet said. “Of course there is artistic expression and you might want to use this filter preset to give off this vibe but really being able to express through a caption for Instagram stories your own reality and not just the highlights.” X