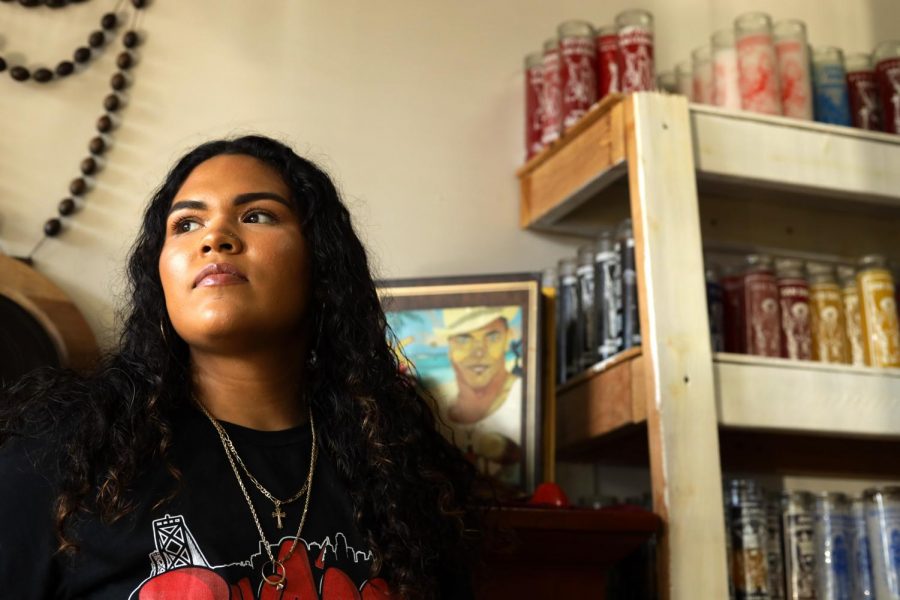 By Izzy Alvarez and Photos by Paige Acosta

A thick haze from the incense lingers in the shop. The saint statues in the window displays attract passersby, but the pungent scent invites them in. The lively music evokes a Caribbean feel. Large vivid paintings of powerful figures hung from the white walls offer a glimpse into an unknown spiritual world.

Nayeli Barraza cleanses Botanica Yoruba, her grandmother’s shop, twice a day, but there is no sweeping or dusting involved. Pop Rocks-sized quartz crystals produce fragrant smoke under a bed of rounded charcoal, burning the Three Kings incense to cleanse the energy within. Her petite figure with long, wavy dark hair walks near the white, wooden shelves containing rows of candles representing a santo or desire. Every corner of the shop is washed with incense to keep disruptive energies from invading the calm spirit felt as soon as you walk in.

At 20 years old, Barraza has lived in two worlds her entire life: her maternal family’s world of Santería, an Afro-Cuban religion, and the western world of medicine outside of her home and the botanica.

The negative connotations surrounding Regla de Ocha, as Santería is formally known in western society, has made it difficult for Barraza to fully express everything she embodies. 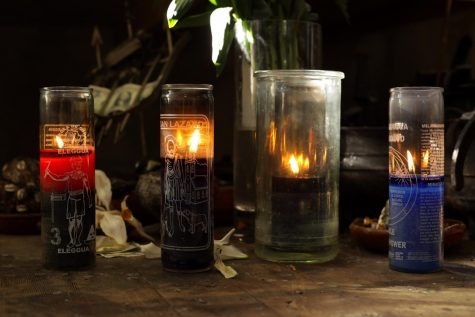 “You can’t bring your own beliefs into the medical field. I think that that would be the hard part,” Barraza said. “I think that people should just do what they feel is safest and best for them.”

The decision to study nuclear medicine has brought ethical dilemmas in her initiation of becoming a Santería priestess. The religion she was born into was a generational inheritance. Her great-great-grandmother was a priestess and passed the tradition down to her grandmother, Yolanda Marenco.

The origins of Santería, which loosely translates to the revere of the santos or saints, are traced back to the Yoruba religion of West Africa. The slave trade brought members of the Yoruba tribe to Cuba and with them the religion evolved to syncretize Catholicism in their new surroundings.

Lucumí is the spoken language of Santería, deriving from the Yoruba language with Spanish phonology. Marenco speaks the language when the family travels to Cuba for ceremonies.

As a Santería priestess, Marenco offers consultos or consultations with consecrated Spanish cards and dilogún (cowrie shells). In Santería this divination is a way for humans to receive guidance from the orishas (santos).

Marenco has over 40 years experience. She is the only fully initiated priestess who can consult with santos. She can’t see into the future, a common misconception, but through the orishas she can help guide a person to the life they want to live.

She is godmother to many and has initiated them into Santería. It is not common for a family member to train another. However, an exception can be made in this case as Marenco is the younger Barraza’s godmother or mentor in her path to priestesshood.

“She’s the one that’s more sensitive than the rest,” Marenco said. “Not only to the religion but to the spirits, to the needs of the spirits. Most of her dreams come true.”

The mysticism revolving Santería has been stereotyped to Voodoo and its practitioners have been shunned by western society for some of its rituals, like animal sacrifices. Some outsiders Barraza has invited into her home compared it to Satanism. She’s lost childhood friends because of their parents’ intolerance. 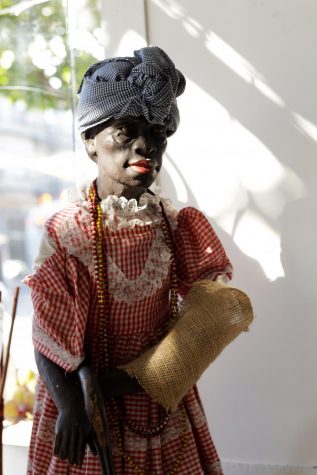 At a young age she saw a santo mounting a person during a ceremony. This scared Barraza away from Santería for a couple of years. She didn’t know yet that mounting is an art of a santo entering a human in a trance-like state to communicate. Not all in the religion know the reasoning behind its traditions — it’s told when they are ready. With patience Barraza is slowly but surely learning the customs of the culture.

“It changed the way you view the religion. Then I would go to drummings and someone would get mounted,” Barraza said as a matter of fact. “I would receive messages that I really needed.”

When Barraza was five, she and her siblings were baptized as members of Santería. They were dressed in white and wore headdresses with traditional gifts of cotton and coconut. For a part of the Mano de Orula ceremony they had to sit still with eyes closed, holding two one-hour candles in each palm. They must stay immobilized until the candle wax melts down through the wick. After the ceremony, they are given a simple yellow and green beaded bracelet to wear on their left wrists.

“After that I definitely noticed the change in my life,” Barraza said. “And I just felt like there really was always a protector.”

If the bracelets were to break off, the devotees are forbidden from touching it. A new one is made and placed in the follower’s sopera or soup tureen, which is decorated based on a santo’s colors. It symbolically represents a home for Orula, a santo, to gain his aché, or blessing. It is kept there for two to three days, sometimes weeks, to permeate the energy. The broken one is discarded.

“I think it’s a good thing when my bracelet breaks because who’s to say what energy was coming my way,” Barraza said. 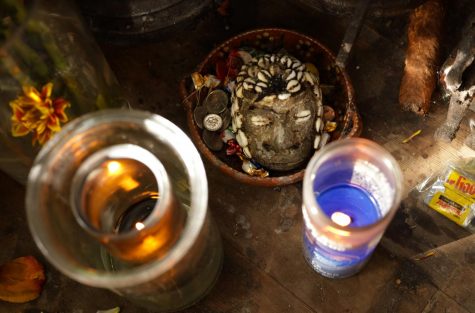 Botanica Yoruba carries the heritage of Santería inside its four walls. A statue resembling a black Virgin Mary is center alongside an island glass case displaying oils and stones atop.

The kaleidoscope colors of the candles are a staple for the spiritual shop. There are candles for love, death and success. Most all of them are stamped with saints such as the familiar St. Jude and the lesser known San Simon, patron saint of drunks. They are then prepared with a blessing of sanctioned oils, seeds and flower petals.

Soaps are available for those that need an energy cleanse. The shop is stocked with plenty to meet spiritual needs and even consultations provided by Marenco.

With it, Marenco hopes the younger Barraza will continue the business she has built. Family members describe her as an old soul who is open to others. Despite her endowment, this way of life wasn’t something Barraza had contemplated much while growing up in the religion.

A chance encounter on a trip to Cuba in 2015 established her direction to the religion. An espiritista, someone who can channel the other side, told her to stop taking her medication and see a doctor immediately. She did once back home, and was told she had developed cancerous polyps in her uterus from the medication.

The revelation affirmed her of Santería’s credibility. Her health history was a factor for going into the medical field. She found that she can help others spiritually and physically if she continued her career path in nuclear medicine.

“She’s honest and that’s what you need in this kind of business, to be honest with people not to take advantage of the pain of other people and their suffering,” Marenco said.

The herbalist origins of the religion can affect misinformation about medical treatment in the community.

Carlos Cardova, a Latinx studies professor at San Francisco State University, has been educating students on Santería since 1974. A priest himself, Cardova is an herbalist who prefers to steer clear of non-organic substances unless absolutely necessary.

“You can combine both it’s not prohibited to use medical practices. If a person needs a surgical procedure, definitely, that is encouraged,” Cardova, 69, said. “Something that we would do is to get them spiritually prepared so that they can recover and handle [the procedure] well.”

Although she no longer practices her father’s religion of Catholicism (her mother’s second), she used to consider herself Catholic. When she was a child her parents divorced because the spiritual differences put a strain on their marriage. Her father now accepts their Santería practices.

“At first, I felt like I had to hide the fact that I enjoyed the religion,” Barraza said. “Once I started to be more open about practicing the religion and enjoying the religion, my dad was completely OK with it.”

Icela Barraza, Nayeli’s mother, experienced misunderstandings of Santería while attending a Catholic school when she was younger. At times, friends assumed it was Voodoo or witchcraft.

“I was automatically raised in it. My kids had the choice to pick whichever side because their father is Catholic and did not believe in Santería,” Icela said. “I’ve always given them the option to choose, whatever calling their path is that’s the path they’re going to choose.”

When Nayeli Barraza is ready, she will go to Cuba for her tambor ceremony. Tambor is an introduction to making santo as part of the initiation to undergo a year in white. It is a celebration of body and soul where all in attendance wear white from the corona (crown) or headdress to the shoes.

Barraza will be given the name Iyawo and she can’t be referred to by her given name for a year.

The ritual starts with a gathering of witnesses in white then slowly with Iyawo walking around in circles while the tambores chant and play. Iyawo will present coconuts and candles as gifts for the given santo.

An estera, a woven straw mat, is placed in front of Iyawo as they throw themselves on it face down to salute the tambores (drummers) before them. Barraza will also use the mat to sleep and eat on the whole year.

The ceremony advances with Iyawo dancing in front of the tambores step by step then progressing to more rhythm with fellow onlookers joining in the dance behind. The singing, dancing and banging of the wooden drums grows louder and louder with everyone’s collective claps.

The crowd forms a circle around the Iyawo as they are the only ones left dancing, then they all stop abruptly. The initiation ends with Iyawo running around in circles as the tambores accelerate their beat and then exiting the ceremony.

Soon after her year in white, Barraza will finish her nuclear medicine education to work with MRI and CAT scan machines.

She’s learned to lean on the strength her faith has given her to power through whatever trials come her way. Educating the masses on Santería is important for her to preserve the religion. Her ultimate dream is to run the botanica full time and bring some comfort to people seeking spiritual advice as her grandmother does.