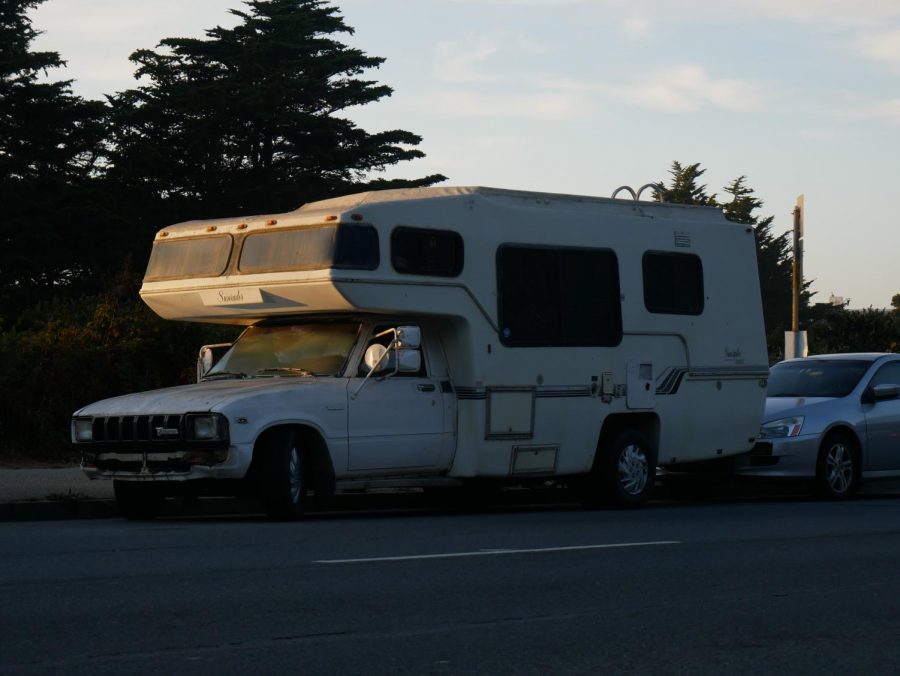 An RV is parked on Lake Merced Boulevard in San Francisco, California.

By David Sjostedt and Photos by Harrison Rich

“They’re just going to try and kill freedom,” says Michael Stoddard as he stared at the dirt beneath his fingers. His hands are clasped in the air, as if holding a powerful orb he can’t take his eyes off of. “There’s going to come a time when they’re going to try and corral people. I love my country, but I don’t trust my government.”

Stoddard has always preferred the vagabond lifestyle. He, his wife and their three dogs are usually found parked along Lake Merced Boulevard in an RV that he says he bought for $3,400.

His beard is bristled and his skin is weathered, but there’s a cheerful notion of a life well lived behind his ruddy cheeks. One of his dogs, Lily, a pitbull mix with a similar vibrant quality, stares intently as Stoddard recalled long road trips in his mobile home.

Despite having an apartment to go home to, he enjoys the freedom of living in his vehicle and believes that there will come a time when he will no longer be allowed to.

“Most of the people living in their RV are choosing to live a reclusive lifestyle,” Stoddard said. “I like being able to go places.”

Lake Merced Boulevard is the perfect resting place for nomadic and reclusive folk such as Stoddard.

The road is flat, making it ideal parking terrain for sleeping. The neighboring San Francisco State University campus offers bathrooms and water fountains for those without plumbing and it’s one of the only places in San Francisco where there aren’t any restrictions on the size of a vehicle parked on the street.

Much of the city has become a battlefield for residents fighting to preserve the parking and safety of their neighborhoods. Earlier this year, residents filed a lawsuit against the city in an attempt to halt the creation of a homeless navigation center on the Embarcadero, and most recently, people were found buying and leaving boulders on the sidewalks to keep homeless people and drug dealers from loitering on their street in the city’s Clinton Park neighborhood.

The San Francisco Board of Supervisors recently approved a plan to create a safe parking lot for van and RV inhabitants to live in their vehicles for up to 90 days.

Spearheaded by Board Supervisor Ahsha Safai, the plan was presented as a rehabilitation program for people who are looking to make the transition from living on the streets.

“The goal is to have people in a secure space for three months until they are able to find permanent housing,” said Monica Chinchilla, Safai’s legislative aide. The spot will feature around 30 openings for RV inhabitants in the Balboa Park area, and will provide showers, bathrooms and full-time security.

According to a report by the Department of Motor Vehicles in December 2018, San Francisco is home to nearly 500,000 registered vehicles. According to SFpark data, there are only 275,000 on-street parking spaces in the city.

With a population of over 880,000 people, that leaves nearly two people for every car and around two cars for every parking space. According to the most recent homelessness Point-In-Time Count, over 500 San Francisco residents were identified as living in their vehicle, making up 35% of the city’s total homeless population. These numbers are rough estimates, but accurate enough to assume that there are over 400 RV inhabitants who will not get a space in this new 30 person lot.

Rosalva Moreno is raising two kids down the street from Stoddard in her recently-deceased brother’s RV, which strikingly resembles Stoddard’s. Moreno has dreams of eventually finding a more permanent home for her family, but in the meantime the RV serves as a way to save money when that opportunity arises. She believes that a space in the new safe parking lot would help her take care of her children, but she was unaware of the safe parking lot or even how to sign up for it.

Hostile architecture and increased parking enforcement have become staples of the city’s culture, and Lake Merced Boulevard is one of the last remaining places for people to park and live in their vehicles as a result.

Stoddard says the only time he leaves his post adjacent to San Francisco State University is to get a cup of coffee during street cleaning.

Monday, Tuesday and Wednesday mornings are brought in by the ceremonial whirring of a street cleaning vehicle, followed by a platoon of parking police handing out tickets to anyone who neglects to move their vehicle in time. While this may be the only form of harassment that RV dwellers encounter in this area, Ricky Nunes, who also participates in the weekly dance with the parking police, says that the lifestyle does come with drawbacks.

“It’s like living on a freeway,” Nunes said, pointing at the incessant blur of traffic on the boulevard. There is a fear that Nunes’ dog may one day run into the street.

Nunes had been outpriced from renting an apartment in the city and harbors frustration with other RV occupants being careless with their trash, but still can’t imagine living anywhere else.

“Even if I had the money by some miracle, I’d probably just buy a bigger RV,” Nunes said. “I love the lifestyle. It’s so free.”

Kelley Cutler, human rights organizer for the Coalition on Homelessness, has concerns that the safe parking lot may empower city officials to create more laws, despite working hand-in-hand with Safai on the legislation.

“If the city uses this like we’ve seen them use other things in the past, such as the navigation centers, to increase enforcement, then this is doing harm,” Cutler said.

Cutler says that Supervisor Safai has spoke of implementing no parking signs around the area of the new lot. 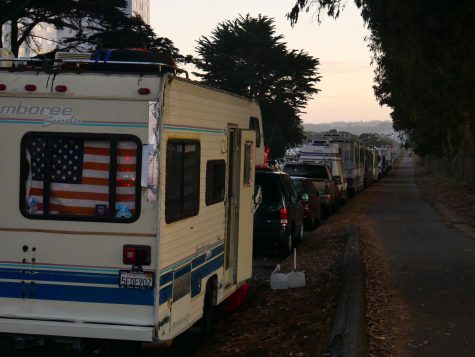