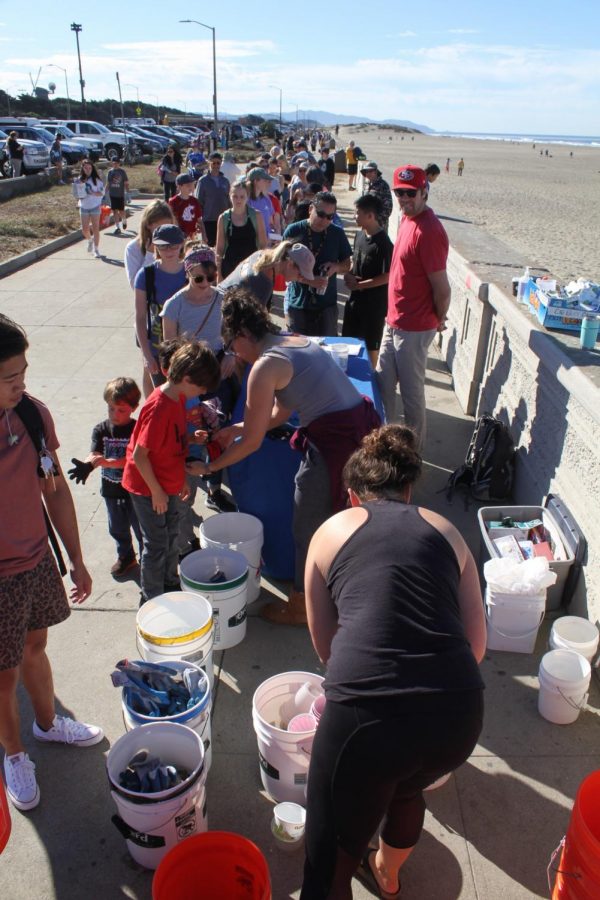 The line trailing off into the distance was attracting people who were not aware of the Surfrider beach cleanup in San Francisco on Oct. 6, 2019

Story by Karishma Patadia and photo by Sandy Scarpa

As temperatures and sea levels rise toward irreversible levels, individuals are becoming more aware of ways to maneuver their lives in a sustainable manner. Globally there is a push to demand change in plastic pollution by pushing people in power toward a sustainable lifestyle.

We all have heard that plastic does not biodegrade and once it’s in our oceans, it takes centuries to decompose, eventually ending up in one of the world’s five major plastic patches. Plastic pollution is one of the most prominent issues of our time because it goes beyond just recycling and managing waste. It fundamentally affects the quality of life. We are beginning to see an uproar of change around the topic of sustainable living by making conscious decisions to use paper or metal straws, however, this is only a temporary fix.

Eva Holman, former Rise Above Plastic program lead and current member at large, coined the term “single-use” as last year’s term of the year and shared the urgency of transitioning toward reusable materials. “When you switch one single-use like plastic, and you make it another single use like paper, you’re just changing the source material to something else that’s valuable,” Holman said.

However, plastic has been in conversation for over three decades. In the early 1990s, researchers and some politicians noticed that non-biodegradable plastic contributes 60–80% of the waste in the ocean. Plastic is supposed to be recycled into reusable products. According to statistics from the U.S. Public Interest Research Group (U.S. PIRG) only 34.7% of Americans actually recycle. The average lifespan of plastic bags are only one to two uses.

Many people believe that cutting down plastic waste will bring a greater good to our environment, however, others are directing the conversation toward the single-use phenomenon and emphasize on reusing materials.

Surfrider San Francisco is an organization that focuses on making sustainable decisions that center around reusing products rather than using compostable items for one-time use.

Currently, the local chapter is fighting to pass the “Reuse Ordinance,” alongside Supervisor Aaron Peskin, in hopes of implementing the overall reduction of disposable goods.

Last summer when Starbucks announced it was phasing out plastic straws, CEO of PacknWood restaurant product supply company Adam Merran told CNBC that paper straws cost five, even ten times as much as plastic straws. Due to this significant cost difference, companies are more reluctant to make the shift.

If passed, this ordinance would also feed into San Francisco’s 2018 Zero Waste Goals, which includes recyclable and compostable wastes.

The San Francisco chapter currently has seven programs embedded in their organization. The Ocean Friendly Restaurants program specifically focuses on transforming the use of compostable and disposable goods toward reusable materials.

Program lead of Ocean Friendly Restaurants Corrine Gentile found that the most common item that is found on the beach comes from food products and packaging. The program’s main goal is to find a solution for restaurants to discontinue products containing plastic and to eliminate these materials from ending up on our beaches. Gentile contacted about 30 restaurants across the city to change their materials to reusable products.

“Everytime we certify a restaurant, we put it on our social media, on Surfrider SF, so we try to promote that the restaurant is now ocean friendly and we hope that it will make a positive impression in consumer’s mind,” Gentile said.

Melanie Napholz, a member of the San Francisco chapter, hosts beach cleanups three times a month. On Oct. 6, Napholz and Holden Hardcastle, chair of the local chapter, registered over 200 volunteers to pick up trash on Ocean Beach. The massive crowd of people picked up over 700 pounds of trash and 1,500 cigarette butts, Surfrider SF said on Instagram.

Almost every day-to-day item is made of or contained in plastic. Tupperware, face wash, wrappers, water bottles, fishing wire, tires and even certain clothing are all components of plastic, and ultimately breaks up into smaller pieces of plastic. Researchers have found that the accumulation of plastic in our oceans has led to the Great Pacific Garbage Patch, a buildup of marine debris in the North Pacific Ocean.

According to National Geographic, the debris that builds up in the ocean creates a layer that blocks sunlight from entering, and ultimately leads to a disruption in the ecosystem due to plankton and algae not receiving the correct nutrients resulting in a vicious cycle.

There are larger companies that are headed toward sustainability. For example, at the end of 2018, Trader Joe’s announced on their website that the company will be more accountable toward sustainability by moving away from plastic containers and produce bags, replacing them with compostable materials.

In this industrial, capitalistic world, plastic feeds into low cost production, and due to the durability and flexibility of the material it becomes accessible to consumers. However, plastic is not a necessity in our world. With the widespread demand of attention toward plastic pollution, it goes to show the importance of the impact that consumers have.

Blue Plate, a new American comfort food hub located on Mission Street, was one of the first restaurants in the city to transform their materials toward reusing cups and plates, said restaurant owner Jeff Trenam.

Trenam became aware of the importance of reducing the abundance of plastic in his restaurant at the end of 2017. “We’ve always tried to have our to-go boxes to be recycled and compostable, but we’ve never gone in for buying plastic utensils or single-use stuff. It’s a matter of us being aware of what we can do better,” Trenam said.

Holman hopes to coin the term “reuse” as the term for the next year.