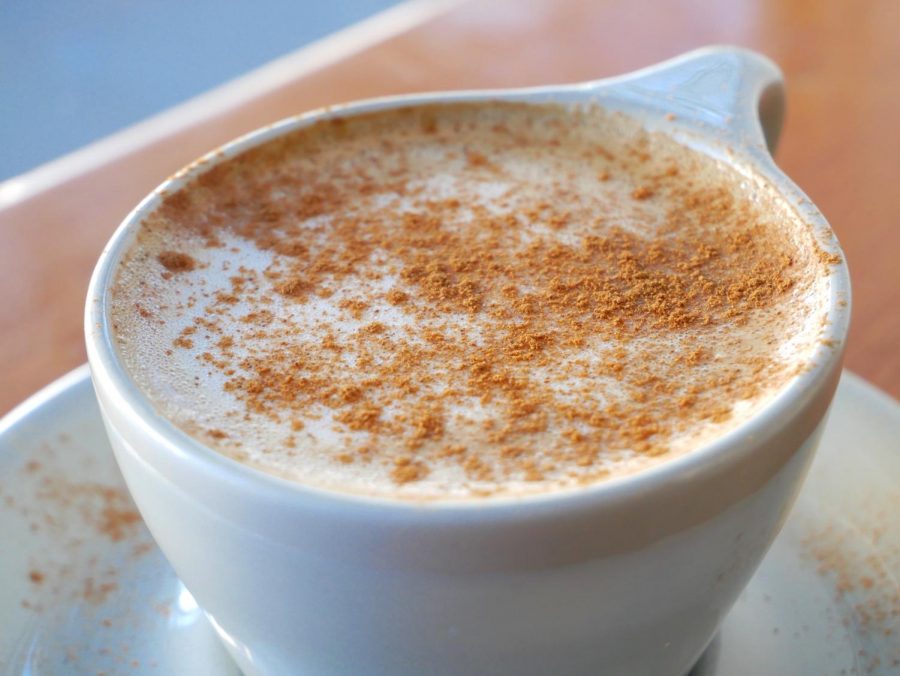 by Anne Lime and photos by Harrison Rich

Some people call it a three-course meal during a busy day or week. Some call it a vice, and others say the day literally doesn’t start without it. It’s used as a way to break the ice over business or a date. A good cup of coffee really goes a long way in making our day, and the city isn’t short of them. Coffee culture has become more prevalent in San Francisco over the last few years. It’s the second-highest popular traded product in the world, as well as one of the more diverse.

The San Francisco Chronicle claimed San Francisco “coffee capital of the West” in March. Although there are those who can pinpoint where the nearest Starbucks is from them, various coffee shops throughout the city are opening up that add to the appeal of mainstream coffee consumption.

When walking into some of these local shops, the aroma of coffee beans can tell one about a coffee bean’s source.

Zandre Azogue, co-owner of Blue House Cafe, which held its grand opening on Sept. 21, described the variety in flavor profiles of imported coffee beans. Coffee beans from Central America normally go into an earthy, chocolatey flavor, while beans from Africa and Southeast Asia are more citrusy.

“As far as espresso goes I think my favorite is a cortado. A little bit more milk than a macchiato, but not as much milk as a cappuccino,” Azogue said.

He emphasizes the importance of taking care of the whole supply chain from ethically sourcing his beans from overseas coffee farmers all the way to the customer.

“I’ve been to Guatemala several times. I’ve had a lot of exposure to the coffee and the coffee culture there,” Azogue said. “Being in the coffee farms in Guatemala they grow some of those beans up on volcanoes. The high altitude, and the volcanic soil, I guess is kind of a bonus to growing those coffee trees.”

Azogue’s passion for coffee dates back to his early college years attending Cal State Bakersfield, where his first exposure to coffee came from working at Starbucks.

“Trying different types of brewing methods and roasting my own coffee. But by the time that I moved here to San Francisco, that’s when I actually really got into doing those things,” Azogue said.

For Filipino-born Paolo Araneta, co-owner of Ballast Coffee shop on West Portal Avenue, incorporating his cultural upbringing into the coffee he serves is the main focus of his brand and store for over a decade.

“I don’t believe that any Filipino before me has ever bothered exporting Philippine coffee,” Araneta said.

Growing up in the Philippines, his favorite place in the whole world was the beach he grew up on. After spending most of his life between the Philippines and San Francisco throughout the late ’70s and ’80s, he finally settled down in the city three years ago. Having flown over the Pacific so many times, he felt he needed a word that was nautical in nature.

“Coffee is 99% water, right? My favorite color is blue, like a light blue reminds me of the ocean,” Araneta said. “It was important to me to have something that meant balance and at the same time reminded me of the ocean or the sea. That’s how we came up with ballast.”

A ballast is a big, heavy object that is used to level out a boat that’s about to capsize.

Araneta and his business partner, who handles the company’s marketing, opened the shop and started the brand two years ago. Through a small coffee kiosk business in the Philippines, Araneta met a lot of coffee farmers while working in organic farming.

“It’s a very Filipino thing to drink condensed milk with coffee and that’s how I like my coffee,” Araneta said. “We’re trying to give customers a full Filipino experience.”

This experience is rooted in a bean called Barako, an excelsa bean that’s native to the Philippines. Araneta said how blessed they are to have their own coffee, because it only grows on the equator. Ballast’s use of Barako beans strays away from what Araneta calls “the gold standard” of coffee beans in the U.S.

“Every coffee shop you will go through in the United States, I’m going to tell you 99% sells Arabica,” Araneta said.

Barako is a word that is used colloquially in the Philippines to describe anything bold and strong, literally translating to “wild boar.”

“One thing that’s great about Barako is, no matter what dairy or sweetener you put up against it you’ll taste your coffee throughout the drink,” Araneta said. “There are a lot of places you order a latte, tastes like milk because the coffee is so light so you’re tasting mostly milk. Drink a Barako you still taste the coffee which is what I think a lot of our customers really like.”

He explains the reason why no Filipino before ever bothered exporting this excelsa bean is that in the Philippines, they also want Arabica because of the American influence. In the Philippines, if you open a local coffee shop that focuses on Barako and there’s a Starbucks next to it, most Filipinos will go to Starbucks.

“The first wave is like what they used to have back before Starbucks. The second wave is when Starbucks came in. Big chain coffee companies and Dunkin Donuts, they’ve rebranded a lot of things,” Azogue said.

These rebrandings include the cup sizes at Starbucks and the way certain drinks are prepared, like the macchiato.

“We get a lot of flack at Sightglass for not having many flavors to add to our coffee, or not serving dark roast so I think one thing anyone in specialty coffee needs to know is that it’s not going to attract everyone,” said Brie Silva, a shift lead/barista at Sightglass coffee at the San Francisco MoMA.

Sightglass, a major local roasting company in the city, was Silva’s first specialty coffee experience. She started working in coffee during her junior year of undergraduate studies for six months before getting the job she’s had for the last two years.

“The people who like chain coffee shops will most likely stick to those because of the options they provide, but it’s really great getting to see someone have their first really good cup of something like a Guatemala drip and be shocked they don’t need to add sugar or milk to give it sweetness,” Silva said.

Both cafe owners talk about the experience they want to be set for their customers when coming in. Whether you’re coming into their cafes to take a break or to spend a few hours working, Azogue wants you to have this zen experience of being in a coffee shop.

“You’ve got the ambiance, you got your cup of coffee, and then you’re being productive. That kind of takes me back to when I was in college, spending days at a coffee shop like this studying,” Azogue said. “I guess that’s where that inspiration is coming from.”

The natural lighting coming in from the back all the way to the front was designed in making Ballast Coffee bright. A wide patio spacing with minimal and clean appearance helps people focus a bit more. Artwork from ninth-graders down the street and photos from local photographers hang inside. Taylor Stitch, a San Francisco-based men’s clothing line held its sample sale at Ballast a few months ago.

“We’ve been lucky to have this nice little corner of the neighborhood where there’s not much around. People came in and were like, ‘oh, thank you for opening up a coffee shop here,’” Azogue said. “I have a lot of respect for all kinds of local coffee shops here in town. However, I would say there are two levels, right? There’s one like us where we really put effort into everything, from our aesthetics to our process to our experience. Then there are the other ones that are more like convenience coffee shops, which is your cafe around the corner that just serves coffee-based drinks.”

Silva says they are very particular about the coffee they serve and how it’s served. From limited flavor options (vanilla and chocolate) and (up until recently) having only two milk options, no half-and-half. She explained that there’s so much care being put into the roast and prep of their coffee methods — espresso, drip, cold and pour-overs — they shouldn’t need extra added items to them to make them delicious.

Although, these particularities do make some upset at times. As a coffee lover, she appreciates the minimalist idea of these drinks.

“At Sightglass we roast our coffee pretty light so it’s always pretty sweet and can sometimes be tangy. A brew method like a French press, which is more attuned to darker roasted coffees, isn’t something we really do. I think pour-overs are amazing, especially seeing the variety of methods in subcategories under that. I didn’t know much if not anything about pour overs and the proper technique of it until I started working at Sightglass and I think they’re still my favorite drinks to make,” Silva said.

Passionate coffee lovers like Silva and Araneta give credit to cities up north like Seattle and Portland for the root of San Francisco’s strong coffee game.

Whichever way you prefer your coffee made, it’s evident that the local coffee shops are taking some diligent consideration to detail about everything that encompasses their service.