How to determine the signs of a toxic relationship 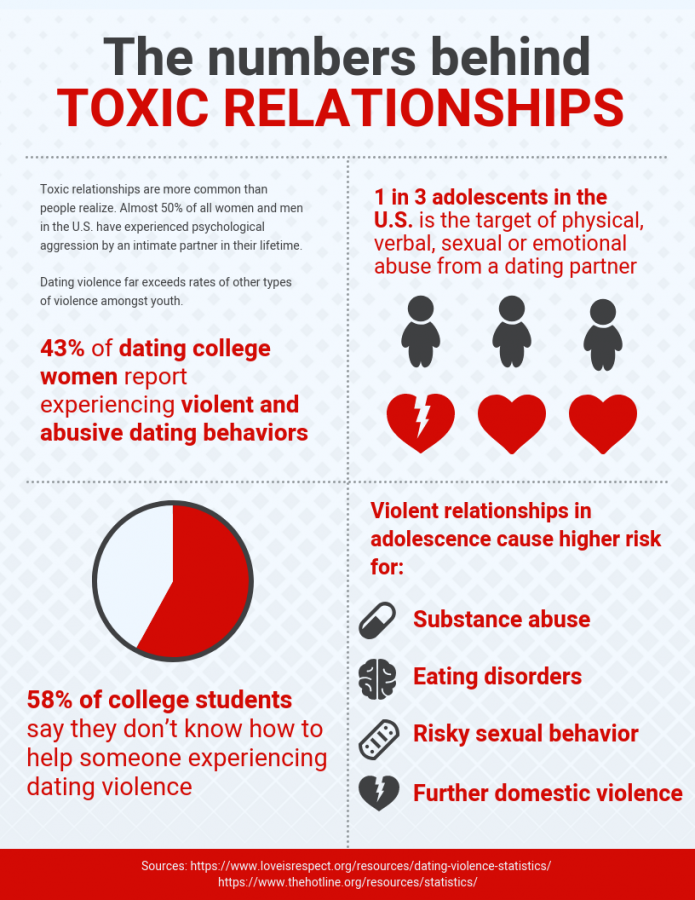 I was 16 the first time someone I was dating didn’t take no for an answer.

But I stayed because — at the risk of sounding like I’m defending them — I generally didn’t feel unsafe. Underappreciated and neglected? Yes, but not really unsafe. Somehow, I’d convinced myself that the absence of physical violence in that relationship was enough to masquerade itself as functional.

If I understood then that I was being targeted by someone with toxic behaviors, I like to think I’d have left sooner. Nothing like it ever happened again, but all things considered, I’m lucky it didn’t.

According to Love Is Respect, an organization dedicated to ending dating violence among young people, women between the ages of 16 and 24 experience the highest rates of intimate partner violence. But a relationship can be toxic and abusive long before — or even without — physical violence. Familial relationships and friendships can be toxic too.

Here’s the bottom line: No one deserves to be in a relationship where they feel unloved or unsafe. But sometimes, it’s hard to tell when those lines are crossed.

Here are some signs of a toxic relationship:

There’s an uneven balance of power

Almost always, the abuser exploits the uneven balance of power.

“I would say there’s a lot of overlap between a toxic relationship and abusive relationships,” said Ivy Chen, a sexuality health educator who’s been teaching Sex and Relationships at SF State for 17 years. “A lot of it can be much more subtle, like emotional [and] psychological abuse. And that can actually be just as harmful.”

“[Toxic people] also often will say things like, ‘No one else would love you,’ ‘No one else will care for you’ or ‘I’m the only one that would put up with you,’’’ said Deena Solwren, a Berkeley-based licensed clinical social worker with a private psychotherapy practice. “And unfortunately, [targets] tend to believe this. They feel trapped.”

But ultimately, Solwren says, people should know they are not responsible for anyone else’s feelings or behavior.

Partners don’t feel like they have to tiptoe around each other in a healthy relationship. If you find yourself constantly watching what you say, what you do or how you act for fear of upsetting your partner, that relationship may be toxic.

If a partner demands access to social media accounts, tries to control who their partner sees or makes constant accusations of cheating, that should be a red flag.

“Actually, what jealous feelings are often rooted in is the person’s own insecurity,”  Chen said. “They’re scared of losing their partner. And so the way they think they should solve it is by controlling the partner.”

Toxic people might attempt to control the way their partner looks as well. Slut-shaming based on clothing choice and body-shaming are also signs of a controlling partner.

A general feeling of unsafety

A healthy relationship should make partners feel cared for and nurtured. Fearing for safety should be a red flag.

“[Have] a safety plan in case things escalate or if someone is concerned for their safety. This could include saving money, contacting proper authorities and having a safe place to get to,” said Karen Boyce, director of SF State’s Health Promotion and Wellness. “Either a shelter, a friend’s house or someone else they trust.”

Boyce said the best way to deal with a toxic relationship is to set boundaries — and set them early. If they’re consistently broken or ignored, it might be a sign to exit the relationship before it gets more serious. Communicate boundaries clearly and consistently. If the person continues or escalates the behavior, seek help.

Admittedly, it’s easier when the relationship is between significant others, friends or even siblings. These power dynamics tend to be more equal, making tough subjects more approachable. When the toxicity is in a parent-child type of relationship, it can be more difficult for targets to advocate for themselves.

Chen said to use “I language” when setting boundaries. Use phrases like, ‘I don’t like it when you say this’ or ‘It hurts me when you do this.’

“When you’re explaining how you feel, it’s powerful. You can’t be wrong because you’re talking about your own feelings,” Chen said. “That’s easier for someone to hear because it relegates the negativity to their action and not who they are as a person.”

Targets should also consider ending the relationship and cutting all contact completely. Toxic people will likely try to re-enter the target’s life and make it hard to end things for good.

Familiarity with unhealthy power dynamics can make it hard for people to break out of a string of toxic relationships. People gravitate to what feels familiar whether they realize it or not, but just because something feels familiar doesn’t mean it’s healthy.

Chen said a pattern of unhealthy relationships can be indicative of deeper traumas.

“Particularly if you grew up with that as a child, you don’t have any control over the way that a grown up is acting or treating you,” Chen said. “And so now that you’re a young adult, they might be replaying similar dynamics in their romantic relationship, now feeling like they might be able to fix it.”

Boyce said it’s common for targets to become dependent on the toxic person, making it tough to leave, especially if the target relies on them for financial support. They may also still love the toxic friend, family member or significant other despite the toxicity.

“Keep in mind that this toxic behavior probably has broken down their self-esteem enough where they often start to have this learned helplessness,” Chen said. “The longer you stay in it, it starts to affect the way you think about yourself.”

The earlier people learn about healthy and toxic relationships, the better.

“I talk about this starting in eighth grade. When I teach sex-ed, I talk to people who are in middle school and high school about what a healthy relationship looks like, even if it’s years before they actually start their first serious relationship,” Chen said. “Most people do by high school or college, but they form ideas about what a relationship is much earlier.”

Every relationship has ups and downs, and that can make it hard to know when it’s time to leave, especially in toxic relationships. Targets should continually ask themselves if they can answer one question without hesitation:

Truly, does the good in this relationship outweigh the bad?