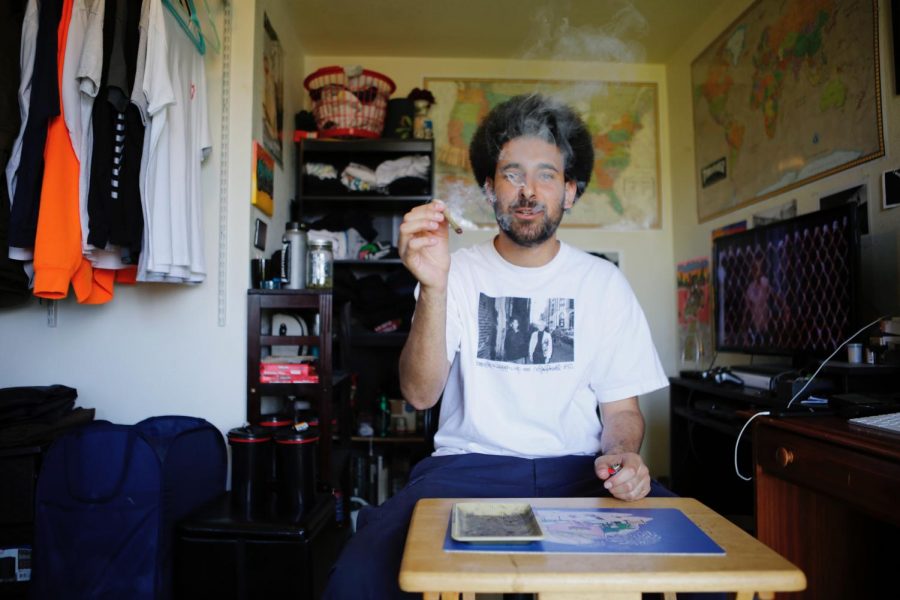 The entrance to the darkroom at San Francisco State University feels more like an entrance to a time machine than a printing room. The door consists of a small circular space, just big enough for about three people, with spinning metal walls that enclose its travelers in complete darkness before opening up on the other side and revealing the low, red glow of the darkroom. It takes time for the eyes to adjust. The space has everything needed to print film.

An enlarger projects negatives onto photographic paper, leaving invisible imprints on the light-sensitive paper. People hover over tables with plastic bins, each filled with a different chemical. Photography professor Sean McFarland talks to students and watches as one places the seemingly blank piece of paper into a bin with the developer.

The blank, almost-silvery surface of the latent print gets immersed in the clear, chemical mixture and begins transforming. While watching the metallic looking image slowly gain depth and clarity in the liquid, it is hard to feel anything except magic.

David Gutierrez is a former student of McFarland. Gutierrez looks back on his time at SF State’s photography department fondly and describes McFarland as the “Jedi Master” to his “young Padawan,” the man who taught him how to go the final step and print his own negatives.

“A negative can go two ways: I can get it scanned and then printed at Costco or I can put this negative in the darkroom, put it on light sensitive paper, expose it and run it through the chemicals and make an authentic piece of art,” Gutierrez said. “And that’s the magic. That’s what keeps me super hooked. … I get pure fucking joy off seeing my photos in a physical form.”

Gutierrez is a well-known and beloved photographer in the local Bay Area skateboarding community. He is known on Instagram as Flava Dave, and to others as just Dave. His sense of humor, energy and positivity is contagious.

At 23 years old. Gutierrez’ photographs have been featured in magazines like “Thrasher” and “Skate Jawn” and his film photography has been displayed in several small shows throughout the city.

As a life-long skateboarder as well, McFarland loved seeing the photos Gutierrez would share while taking his classes. Now, a few years after being in his class, McFarland still follows Gutierrez’ and his photography today.

Before moving to San Francisco in 2015, Gutierrez grew up skateboarding and shooting digitally in Castro Valley since he was 13.

Watching skateboarding videos with professional skate photographer Giovanni Reda on the side as a hype-man inspired Gutierrez.

Gutierrez said that to him Reda was the “media man” of the group, full of personality and always hyping everyone up, and that attracted Gutierrez to being a skate photographer even more.

While teaching a photo class at Woodward, Mortz noticed a “spark” inside Gutierrez and immediately gravitated to him. Gutierrez brought a film camera with him to the camp and under the guidance of Mortz he began to learn about processing film and the history of photography before the digital boom. He personally taught Gutierrez how to process film at home without a darkroom. Mortz wanted to immerse Gutierrez into the process.

“There is more to the process if you want to get the picture you want,” Mortz said. “Dave really picked up on that.”

After his experience at Camp Woodward and learning how to do at-home-processing, Gutierrez dove deeper into film. Through studying other photographers and learning from mentors, like Mortz and McFarland, he began to see the beauty in everyday life and the photographic potential of these things.

Skateboarding will always be a topic of Gutierrez’ photography, but as he ages he is finding inspiration in more places, things and emotions. He has also grown appreciative of the long and complex process — even if that means waiting six months to see what is inside a single roll of film.

Time is intrinsic to the process. From the moment you take the first picture on a roll of film, the light from that specific day and moment is preserved on film. That image sits in secret, in the dark, for days or weeks or months or however long it takes to finish the roll and develop the negative. Only until this process is complete can you print the negatives and bring to life a moment from the past — almost like a time machine.

Perhaps it is this quality about film that keeps it relevant after the creation of digital cameras and gets people hooked on it. And Gutierrez is hooked. You can always find him with a film camera hanging from his neck — and sometimes a second one stuffed in his pocket — hyped and ready to shoot anything that inspires him.

“These are my memories, other people’s memories, in physical form,” Gutierrez said. “It’s pretty magical. I feel like that’s why I’m kind of addicted to it.”

Although film holds a special place in Gutierrez’ life, he often shoots skateboarding digitally, most recently getting one of his images — a gnarly shot of his friend and local skater Logan Bonner flying through a gap in a tree — ran in “Thrasher Magazine.” Gutierrez believes that taking great photos is about more than just the format in which the photo is taken.

“It’s the photographer and the way they laid it out. … The way they presented it is what makes it beautiful, not whether it’s film or digital,” Gutierrez said.