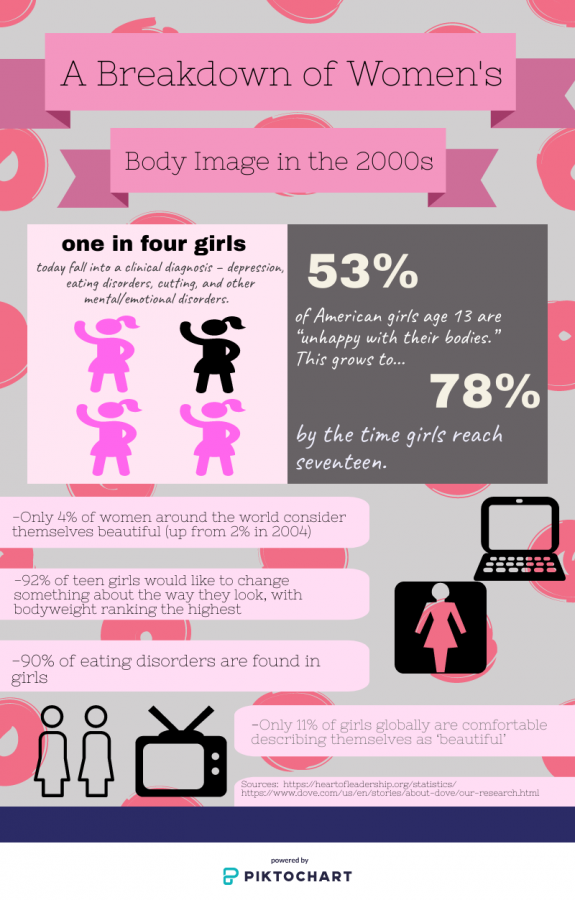 Story and illustration by Shelley Wang

The early 2000s was “so fetch” as former mean girl Gretchen Weiners would say — from the Juicy Couture with Uggs sweatsuit fashion phenomenon, to the birth of primetime reality TV and celebrity tabloids galore.

Specifically, tabloid mania created a large amount of backlash for celebrity women and their bodies. In an August 2017 interview with Vogue, actress Jennifer Aniston said, “I think the problem is the tabloids and the gossip columns taking the human body and putting it in a category. They’re either fat-shaming, body-shaming or childless-shaming.”

The media transcends much farther than just what’s in the magazines, but seeps into TV and movies. The influence of the media begins much sooner than one would think. SF State Women and Gender Studies professor Renu Cappelli said it begins when we are little and aspire to be like the characters we see in books and cartoons.

“It’s a part of how we play, ‘you’re this character and I’ll be this character’ and then that’s when it gives the representation enormous power to shape how we want to be,” Cappelli said.

Today many people use social media and the internet to stay culturally connected and search for the latest scoop on their favorite celebrities. Twenty years ago, magazines were the main source that provided young teens with the latest trends like the multicolored, monogrammed Louis Vuitton purses to the release of the Razr phone.

While there’s been plenty of trend inspiration from magazines, a lot of tabloids pick apart celebrity women and their lifestyles — wearing the wrong dress to award shows, who needed to lose a few pounds and women checking out of rehab.

“We see celebrities profoundly criticized or just scrutinized for what they’re wearing and that inspires us to spend money trying to be on-trend or be like what is shown,” Cappelli said.

The scrutiny and exposure of celebrities heavily emphasized women to oversexualize themselves as well.

According to an article by Julia T. Wood — professor of Communication Studies and Lineberger Distinguished Professor of Humanities at the University of North Carolina at Chapel Hill, the media portrays women to be oversexualized which can then impact one’s own self-esteem, especially for young girls. Wood wrote that hypersexualized women are usually shown as young, thin, beautiful, passive, dependent and often incompetent and dumb.

This connects to the types of women that were displayed in the media during the early 2000s in  movies like “The House Bunny” and “Mean Girls.”

“At this point, it’s disappointing that sex sells so easily. I am more impressed with promoting creativity and intelligence. Making our minds sexy, not just our bodies,” said Sophia Villaseñor, who is a student teaching a course on self-alignment this semester.

Wood’s research also touched upon how the media “pervades our lives” and how the misrepresentation of gender affects how one sees themselves and what is wanted of men and women.

According to the U.S. National Library of Medicine National Institutes of Health, between 69-84% of women are dissatisfied with their bodies. The issue begins when society starts putting celebrities on a pedestal assuming they are different than anyone else.

Psychology Today said that “celebrity worship syndrome” is a real mental health issue that can be described as an obsessive addictive disorder. A person can become overly involved and interested in a celebrity’s persona and all the details about their personal life, which can mean that any “mistakes” or changes made by them are highlighted as life-ruining.

To this day, people rarely want to come out and share their personal struggles. A few years ago, it was almost unheard of. It was the era where the media drove Britney Spears mad enough to shave her head and later bash a car window with an umbrella.

Whether anyone would like to admit it or not, the media affects everyone. The media is almost inescapable and Cappelli explains that it “affects all of us on some level. Even if we think of ourselves as ‘I’m not like that. I’m unique and different.’ We’re still responding to it in some way.”

In the early 2000s, the “desired” look was light hair, fair-skin, colored eyes and an hour-glass figure. Those seen as desirable were young, white, blonde women like Paris Hilton. Cappelli remembers how “very, very thin, white women were what was upheld as the standard.”

Reality TV became mainstream with shows like “America’s Next Top Model,” “The Simple Life,” “The Real Housewives,” “The Hills” and “The Bachelor” all coming out within a few years of each other.

All these shows had one thing in common: showing off the life of beautiful and thin women competing for fame or fortune. Even in popular scripted dramas, all the main character’s in this era were white and thin; for example “Gossip Girl,” “Grey’s Anatomy” and “Beverly Hills 90210.” Looking back, there was little representation in terms of ethnicity, body type or even hair color.

SF State student Soleil Black saw firsthand how vicious and non-inclusive the modeling world could be.

“I remember the first time I got measured. I was a 27-inch waist at 17-years-old and they told me to ‘come back when you lose three inches,’” Black said. “The thing I do like about [modeling] is I feel confident when I’m doing it but there are so many negatives because they don’t care about your personality or what you like to do. All they care about [are] your measurements.”

Black ended up stepping away from modeling because it was starting to affect her. She wanted to eat less and workout more. As a result of her experiences, she wouldn’t wish for her future daughter to become a model until she is much older since children are much more vulnerable to criticism.

Black emphasized the importance of loving your body.

“There are always going to be opinions no matter how tall or skinny you are,” Black said. “Don’t let anyone’s opinion affect that. It’s your body and strictly yours.”

Almost two decades later, more women of color are taking lead roles and leaving their marks on the lives of developing females. Though there is still so much more improvement that needs to be done, social movements and brand campaigns over the years have made women feel like they are regaining their power.

The #MeToo and Time’s Up movements have made tremendous strides in raising awareness of sexual assault against women and have emphasized the toxicity in the gendered portrayal of women.

“I see some improvements in terms of body types, as far as modeling, maybe not in high fashion,” Cappelli said. “But the same thing with makeup. There is more representation other than white faces.”

With the media consciously including women of different skin colors and body types, the world’s definition of “beauty” is evolving. Bodies like Lizzo, Ashley Graham, Megan Thee Stallion and Chrissy Metz encourage diversity and change in young girls’ lives that were not seen as commonly in the early 2000s.