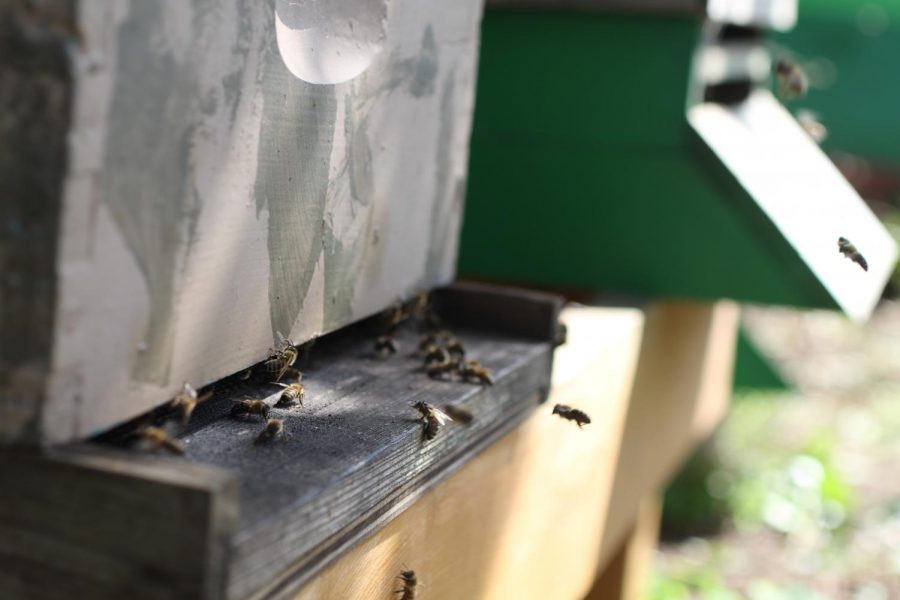 Honey bees come and go from their hive at Garden for the Environment in the Inner Sunset. Photo by Sandy Scarpa.

The honey bee is the glue that holds ecosystems together through pollination. An insect so small, but so gargantuan in its purpose.

But honey bees are being threatened as the climate grows more extreme and human interaction, in the form of deadly pesticides, harms them. In July, President Trump put sulfoxaflor, a pesticide that acts as a deadly infiltration to bee colonies and which was banned in 2016 under the Obama Administration, back on the market. The bee decline is happening before our very eyes, and perhaps even in our own backyards.

“THE HEART OF THE NATION”

Honey bees are intelligent creatures and have several ways in which they maintain the hive, as well as the queen. It’s important to know a few basics about a hive in order to understand the effects of these pesticides on honey bees.

“They’re way smarter than we are,” said Marc Johnson, board member of the San Francisco Beekeepers Association (SFBA). “There’s a hive intelligence. The queen is dependent upon the hive and the hive is dependent on the queen. I explain it as a superorganism, like our bodies, we have a heart that supports the rest of our body, and the rest of the body supports the heart and the queen, in that sense, I call [it] the ‘heart of the nation.’”

The queen lays eggs and while the hive works around the clock to keep a good equilibrium that includes keeping a temperature of 93 degrees at all times. When the queen runs out of eggs and sperm, the hive will prompt her to create her successor.

“She’ll lay 10, 12 eggs that develop into queens. Those nine to 12 come, fight it out, like “Game of Thrones,” and that’s how the strongest survives. She goes out to mate, and when she mates she returns to the hive.”

Queens mate with male bees, known as “drones,” that usually reside by the surrounding area of a hive and are much larger in size. Their main function is to attempt to successfully mate and impregnate the queen bee, according to Perfect Bee, a website dedicated to all things bee.

A queen bee will lay roughly 2,000 eggs, both unfertilized and fertilized, per day, if the hive is healthy, the drones are healthy and the queen is healthy, according to the Orkin website. Each bee has a life span of six to eight weeks, Johsnon said. But the queen bee’s life span can range up to two to three years.

This is where the hive intelligence, if met with systemic pesticides, becomes compromised.

Greg Loarie is an attorney at Earthjustice, a law firm that represents environmental conservation efforts throughout the nation. Loarie works directly with beekeepers, as well as nonprofits who protect bees and other pollinators. He is well versed in pesticides, specifically sulfoxaflor.

Sulfoxaflor is what is known as a “neonicotinoid.” According to a fact sheet on Texas A&M AgriLife Extension’s website, a neonicotinoid acts on an insect brain the same way nicotine does in the human brain. It stimulates receptors that cause responses in the nervous system, and if it doesn’t kill a honey bee, it can be spread and threaten other honey bees by contact of one colony member. There are a variety of ways it can be treated on a crop.

“Sulfoxaflor can be dripped into the soil. It means that they can be sprayed on the foliage,” Loarie said. “They can even be used as seed treatments for you to see in a bath of the pesticide and then planted and as the plant grows. The actual sprout is toxic to insects. That means that the insect doesn’t necessarily die sort of immediately after contact. It dies after it eats a certain amount of the treated plant crop.”

The problem with systemic pesticides is that when farmers spray it on their crops, it gets into the roots, which enters the soil. It can then enter the water supply and any other places near the sprayed crop.

Therefore, if sulfoxaflor is sprayed anywhere near crops that are pollinated by honey bees, there’s a good chance that it will get into their system and act as a cancer.

THE RISE AND FALL OF SULFOXAFLOR

Sulfoxaflor first came to be in 2013, when it was registered by the Environmental Protection Agency and listed under names such as “Transform” and “Closer.” It was an attempt to find a highly effective insecticide against those insects that began to show a tolerance for other neonics. It showed high success rates with less application, according to an article published by the EPA.

“I was the attorney that represented the beekeeping organizations challenging the EPA’s decision to register sulfoxaflor for the first time back in the Obama administration,” Loarie said. “That litigation resulted in sulfoxaflor being initially taken off the market, and then substantial restrictions on use put in place.”

Loarie represents non-profits that often sue the EPA, such as the Pollinator Stewardship Council, Inc. (PSC), who won the case that first took sulfoxaflor off of the market in 2016.

“We, in the beekeeping world, we saw that and said, ‘Wonderful, another toxic systemic pesticide has been registered for use on bee-effective crops,’” Executive Director of LEAD for Pollinators Michele Colopy said.

Colopy’s duties are to bring small farmers and non-profits like the Sierra Club together and educate, as well as collaborate on advocacy.

“When we reviewed the registration we said, ‘we’re not happy with this because the EPA clearly stated, our best professional hunch is, ‘this should be okay.’’ We took them to court on that, because professional hunches are not science,” Colopy said. “The Trump administration, can just say, ‘well, it’s a different assessment. It’s not the same and tough.’ The Trump administration can do what they want. That is why there are so many non-governmental organizations, nonprofits, that have to sue to stop things.”

Now Colopy and other nonprofits are returning to court to fight the same battle they had won merely three years earlier.

“Right now the EPA is paralyzed,” said bee researcher Randy Oliver, who conducts his studies in Grass Valley, California. “It would take getting rid of Trump — the Trump administration has the EPA scared to shit.”

Oliver is a noted high school biology teacher turned bee researcher, who conducts his own studies on his property. Oliver believes that while different pesticides do harm beneficial insects, bees are healthier than ever.

Oliver sees honey bees as livestock, with power in numbers.

“Think of under your own kitchen sink,” Colopy said. “All the different chemicals that are under there, the cleaners, the furniture polish, different shampoos — mix it all together, that’s what they’re spraying on your food as it’s growing.”

Colopy believes diversification in the crops that honey bees pollinate are necessary for thriving colonies, and as little intervention with chemical agents as possible.

“This is the other issue we get into this industrialized agriculture,” Colopy said. “Like almonds, you have 1,300 square miles or more of one crop. It’s bad farming. It’s bad land management. It’s not supporting a balanced ecosystem. It’s only supporting greed.”

As if having chemicals that directly harm honey bees wasn’t enough, the world is also battling the climate crisis, which threatens all species.

“During wintertime, the bees just cycle down. That is a normal part of the behavior. We have two things that have happened in the past couple of years that affect our bees. One is there are 25,000 more cars on the road at this point in time [than] there were five years ago because Uber and Lyft,” Johnson said. “The air is different. That affects, again, both sense of smell and sense of sight. So [a honey bee] may not see flowers or smell flowers the same exact way. And we seem to have a honey drop off at that point in time.”

It’s not just the sight and smell of  honey bees that are negatively impacted by climate change, though.

“We should be concerned. We know that the insect biomass globally is just being decimated. It’s an accumulation of things. It is the overuse of pesticides — especially those pesticides that have these long half-life,” Colopy said. “One application of a pesticide might last in the soil for up to three years if it gets into the water and stays down in the sediment where the sun can’t help to break it up.”

The problems continue to mount when harmful remnants get into waterways.

“Then you have a flooding issue. That sediment that’s toxic is going downstream killing other invertebrates in the water. So it is causing problems for even the insects that we are killing, and we are killing an awful lot of beneficial ones,” Colopy said. “Those beneficial [insects] were to be there to feed birds, to feed the fish, to feed the frogs [and] to feed other critters. When we destroy the bottom of the food chain, everything else moves down.”

WHAT CAN WE DO

Johnson paused over his large latte that had a swirled design in it and hung his head low to try and find his words.

“I don’t think we’re taking enough care of our farming communities and their use of pesticides. So many of these [pesticides] are supposed to not be harmful to honey bees, but we know that they are,” Johnson said. “If the bees go away, we’re in deep doo-doo. Thirty percent of our food is pollinated directly by the honey bees.”

Colopy said hope is not entirely lost, even though chemical companies compromise government, which compromises policy, which in turn, compromises the environment.

Colopy and her team said the four biggest things we can do is to eat organic foods, eat a diet specific to our geographical location, purchase local and support local beekeepers.

“We as humans — to fix this — have to get off the drugs, which are pesticides. It really all comes down to money. It comes down to consumers understanding that if you buy a pesticide, and you make your neighbor sick or you make yourself sick, [it’s] your own darn fault,” Colopy said.  “The pesticide company doesn’t care. While we have regulations, those regulations are not really saying buyer beware. People think that well, ‘if [the] EPA registers it, it must be safe.’ It is a product meant to kill, therefore, it is not safe.”