Processing Life’s Problems One Laugh At A Time

How comedy allows us to process the news, mental illness, and life’s meaninglessness 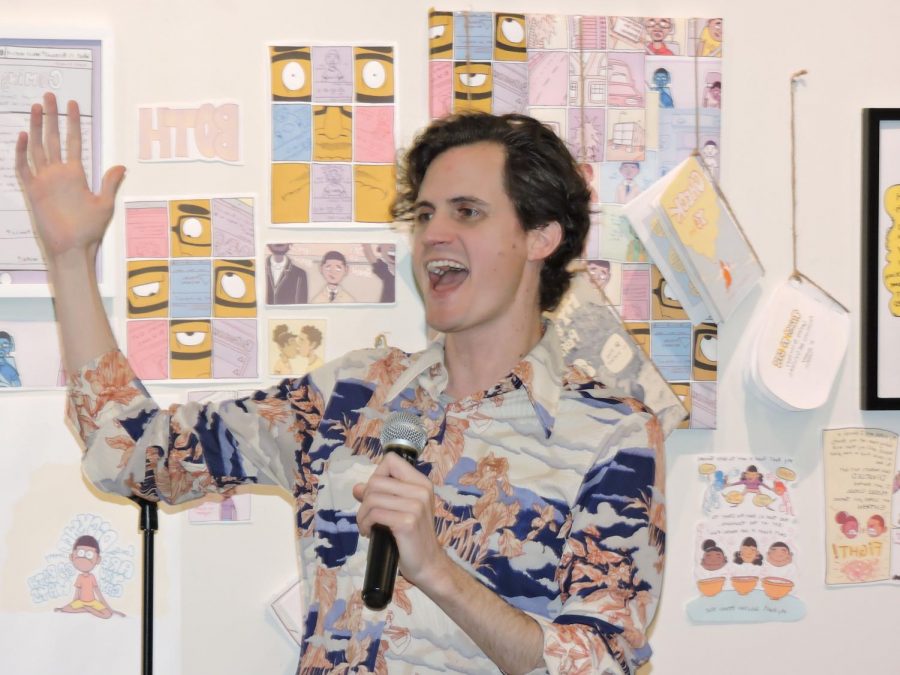 The stage setup for the comedy show at Oakland’s All Out Comedy Theater consists of a lone, black microphone perched on top of its stand, sitting in between an elongated black-cushioned armchair.

“The jokes you’re gonna hear tonight will be about mental illness. We’re not OK, and that’s OK,” said a comedian who goes by the stage name Wonder Dave, welcoming an audience of twenty-somethings to “Mental Health Comedy Hour.”

At this Bay Area comedy show and beyond, humor is utilized as a means to deal with all that is going in the world and in our heads. This may have already been true in times past, but today’s comedic material is arguably the most serious, yet simultaneously hilarious.

After President Donald Trump ordered the airstrike that killed Qasem Soleimani, head of Iran’s Quds Force, he celebrated with an attitude similar to a fraternity brother winning at beer pong, as the people of Iran mourned in their streets and denounced the United States. Meanwhile, many social media users seized this possibility of going to war with Iran as comedic material.

The #WorldWarIII hashtag trended on Twitter after the news of Soleimani’s assassination broke. Twitter users articulated their dread of World War III by poking fun at their new year optimism being burst by the world already on the brink of war — only three days into the new decade. But why did so many people respond to something as serious as a possibility of war with humor?

“Humor is very disarming,” said comedian Kristee Ono, who along with Wonder Dave created  “Mental Health Comedy Hour.” “As far as defenses that come up with topics. That laugh, a lot of times, is a laugh of recognition of, on some level understanding, what this whole fucking thing is about. It’s a good way to package something that somebody else may not listen to you otherwise. So you’re giving them a way to absorb it.”

In other words: to cope.

Of course, the first major event the world went through in the new decade was its possible destruction due to a dangerous game of global-political chess. It’s through making memes, tweets or jokes laced with dark humor that we can regain a sense of control over matters that we don’t have a say in, even when we feel like we should.

Today’s meme phenomenon isn’t only limited to potential global warfare. Whether it is the COVID-19, mass shootings, the Trump impeachment or climate change, there are memes for it. In each instance, these online jesters are trying to make sense of the absurdity of life.

During this age of heightened dark humor, some comedians are channeling it in their standup comedy sets in a self-deprecating manner to deal with just about everything: sex, mental illness, existential dread or just having to be themselves.

Comedian Julie Ash is one such comic and frequently performs at “Mental Health Comedy Hour.”

“For some of us, making fun of suicide, making fun of death and all of that is carthartic, but to some audiences it isn’t carthartic,” Ash said. “And I think that’s part of the challenge of being a comedian. You have to realize ‘OK what audience am I working with? Are they going to like me talking about this? Or am I gonna make it so funny that even people who think they may not like it will laugh anyway?’”

Joking about something as serious as suicide may sound heavy, but it can be done with great thought and consideration.

“I defintely have a lot of jokes about suicide. I think it’s about 10 to 12 minutes all together and it is always really hard to sell it to people as a thing that both I am OK and safe, and that this is a thing that people need to talk about,” Ono said. “Being silent is even scarier. So, it is a fine line to walk, as far as ‘What are people going to think?’ And there’s a lot of things in my delivery that I do have to convey to people. Like smiling while saying it and being playful when I say it because they need to know that I’m not gonna fucking leave here if this is a bad set and go end my life.”

These stand up comedians aren’t just making fun for the sake of making fun, but rather, to reclaim the parts of their lives they often don’t feel they have control over.

“I think there’s a lot about like, finding your voice and having your experience witnessed and having control over the narrative,” Ono said. “That is very important in stand up for me.”

Stand up comedy also offers a unique opportunity for comedians to truly be themselves without the filters of a television show or film script.

“I mean, that’s my preference towards standup as opposed to doing sketch [comedy] or acting, which are all things I’ve done. But I really just like being myself and getting to tell my own stories,” Wonder Dave said. “Just being me on stage, that’s my favorite. It helps me.”

Ash and Ono deliberately don’t do political jokes. Not due to any apathy or callousness for the state of the world, but instead to not contribute to an oversaturated sea of bad (usually Donald Trump) jokes.

“For me, specifically, I try to stay away from political humor. It’s not that I’m afraid to talk about it cause I’m a liberal and I’m proud of being a progressive and I would be happy to share my views. My problem is just that comedy specifically, so many comedians are already doing it,” Ash said.

“When it comes to politics, late night talk show hosts have it covered — Trevor Noah, John Oliver, Samantha Bee,” Ash said. “So, it’s like, what Trump joke am I gonna be able to write that’s original?”

Bad, done-to-death Trump jokes aside, the working structure of standup comedy still lends itself as a way to address, deconstruct and ultimately ridicule the political atmosphere.

“I appreciate that kind of standup in general as a mechanism of recognizing how absurd everything is and making it a tolerable thing to ingest as a person living in this world,” Ono said. “I would rather watch comedians talk about topical news and political stuff than actually watch the news because it is a fucking bummer. … I’ve heard some great jokes about taking down capitalism, like it’s great, but it’s hard to do that. It’s a very hard thing for people to do.”

Part of the mission of “Mental Health Comedy Hour” is to work to de-stigmatize mental illness. Every show tries to help those in the audience. Literally. A mental health professional is usually part of the line up and joins the hosts on stage for a brief, but very informative conversation.

“One of the things we wanted to do with this show was to openly talk about mental health and mental illness, specifically,” Wonder Dave said. “And Kristee and I have, in addition to finding joking about our mental health struggles funny, we also found therapy to be helpful. So, we thought it would be nice to demystify therapy a little bit and to bring on a therapist to talk about their jobs and have them see like, ‘Here’s a person. You can talk to this person. We’re talking to a person right now.’ And we do want people to get help because I feel like the people who would be attracted to a show called “Mental Health Comedy Hour,” might also be attracted to going to therapy.”

A through line to all these — internal and external — worries is existential dread. A feeling of life bearing no meaning. A feeling some people find great relief in relishing in the fact that we all are going to die one day. Ono is one such person.

“As far as existential dread goes, I find great peace in knowing that none of this is going to matter or is going to be remembered,” Ono said. “Because my anxiety is that people are judging me and that I’m gonna get kicked out of society. So, it’s like, if nothing matters, then if in a hundred years no one’s gonna remember any of this, then I feel freer to kind of carry on as a person.”

But for Ash, this unavoidable conclusion to life serves as the catalyst for her anxiety about life, during and after it.

“Death is what I fear, yeah. I fear other people judging me and stuff. But for me, it’s like, I don’t wanna die, because all of this stuff that I have. I’ll lose it. But all the bad stuff will be gone too, so that’s nice,” Ash said. “Anytime that you create art that’s almost like a symbolic immortality because you’re creating that thing. So once you die, you’ve still created all of that. So, I think subsciously, we think it’s a way of dealing with that.”

Everyone seems to have their own way of handling what life throws at them.

“I think that’s where depression helps me out because I wanna fucking die. That’s how depression and anxiety work in tandem,” Ono said, laughing along with her fellow comedians backstage, momentarily suspending that loud silence that comes with being alive.