Health concerns cause American Tulip Day event to scale down

The annual “you-pick-em” American Tulip Day event kept it safe this year and had volunteers hand out tulips with caution amid growing health concerns. 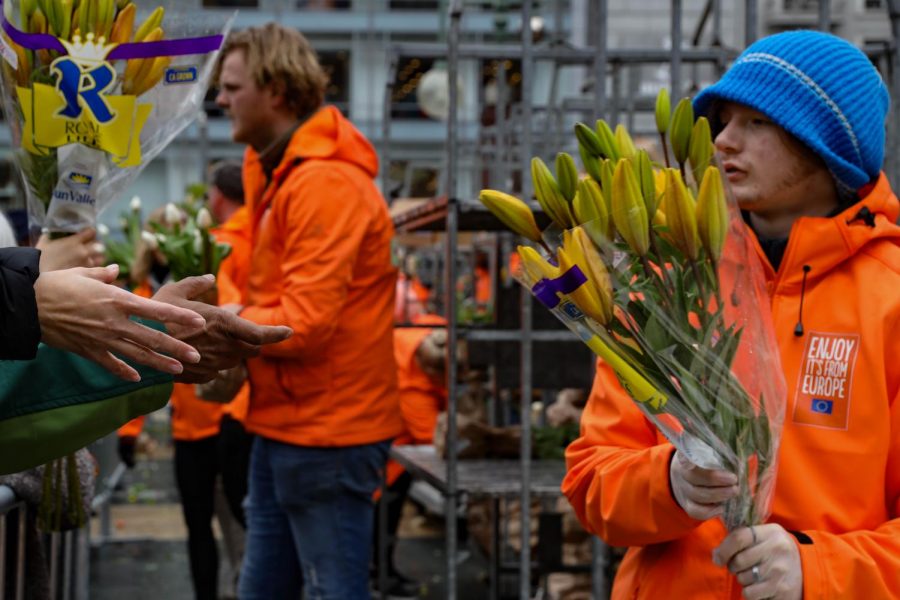 Tulips are stacked and handed out by volunteers in order to adhere to San Francisco health regulations spurred by recent COVID-19 developments during the American Tulip Festival at Union Square on March 7, 2020 (Photo by William Wendelman)

Despite the rain and recent COVID-19 health scare, hundreds of people still clustered around Union Square to collect free tulips on Saturday, March 7. However, the event was different than in past years.

Henk Westerhof, president of Royal Anthos, a Dutch company that exports about 500 million tulip bulbs to the U.S. annually, explained that he and his team still wished to proceed with a scaled down version of the event.

“We were allowed to organize it in the same way as in previous years,” Westerhof said. “But the requirements were that strict that we said, ‘well, I don’t want to take a risk.’”

Westerhof wanted to be “polite” to the City of San Francisco and honor the city’s recommendation to minimize physical contact at large events as much as possible.

This morning around 11:00 a.m. volunteers in bright orange jackets standing behind event barriers were handing out bunches of tulips to a steady crowd of over 100 eager people. But as concerns revolving around the COVID-19 continue to escalate, compared to the 2019 tulip day, the event was minimized to help reduce the chance of germ contamination.

“Instead of getting the people to us, we go to the people and we give them a bunch of flowers. And as you can see, there’s still a lot of people. But you also see that people are spread around, not close to each other. No big crowds. And that’s what we have to avoid.” Westerhof said.

In the past, Union Square was covered in tulips, and at 1:00 p.m. people could swarm in and pick their own bouquets. The tulips were arranged to create a large mural that could be seen from the top floor of Macy’s. This year, by Friday night, three large trucks of tulips were already on their way from Redding to San Francisco in order to set up the mural when the city issued their release.

Beatrix Salih, who has been to the event before and feels a personal connection as she is of Dutch descent, said she supported the changes made to the event because it was always crowded.

While Salih said she misses how she could just walk through the flowers and pick her own, she explained that “the festival functions very well, today even better, because there’s no crowds at all. Which is kind of nice for us. But not for [the hosts],” Salih said.

This year, tulip day hit a happy medium as Royal Anthos was still able to provide free tulips to people while keeping health risks low for everyone involved.

“I love the way they’re doing it,” Salih said. “To just give [tulips] away and then you know, hope that people start buying them in the future.”

She explained that a good way to preserve tulips is to put an old copper penny in the vase, which will help them stay up straight longer.

In a lighthearted effort to usher in spring and bring the Netherlands’ tulips to people in San Francisco, the annual American Tulip Day went on as planned. Many people, Westerhof included, are expecting the event to be able to return to its normal extravagance next year.