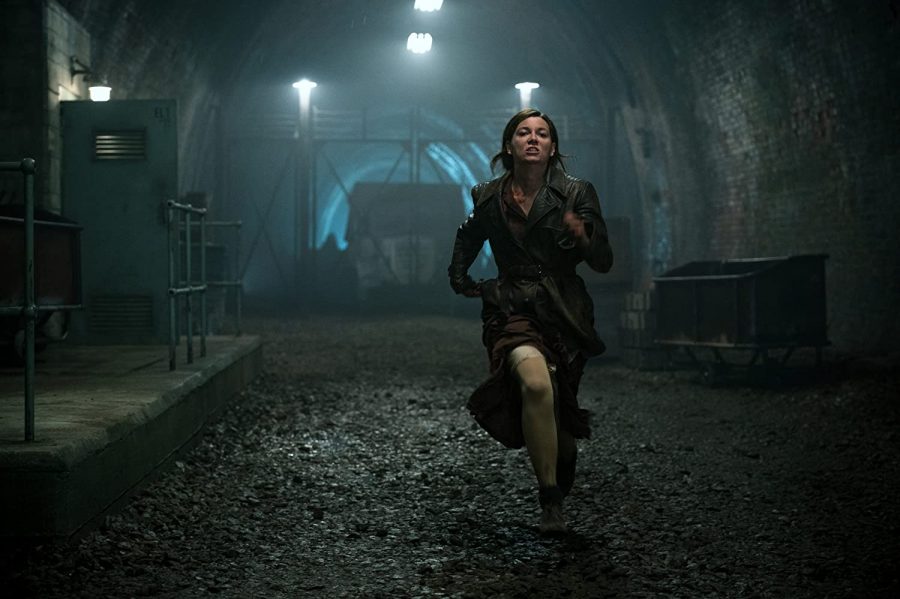 For me, found footage horror films are usually a motion sickness inducing mess — I’m looking at you, “Blair Witch Project.” The violent shakes and two-second camera glances of the monster in question has never been visually appetizing to me. However, when I put aside my bias and watched “Creep,” a found footage psychological horror film written by Mark Duplass and Patrick Brice, I had a change of heart. “Creep” follows Aaron (Brice), a videographer who answers an ad paying $1,000 to film Josef (Duplass), an eccentric man with boundary issues, for a day.

When Aaron meets Josef at his remote cabin in the woods (I know, I know. He’s really setting himself up for this one, but stay with me.), Josef informs Aaron that he’s dying of brain cancer and wants him to film a video for his unborn son. Josef’s intentions seem sincere at first, but as the day drags on, Aaron discovers his subject’s true identity. This film is truly unsettling and makes you question your instincts. The fact that Josef can be hilarious at times also adds to the confusion. Aaron, like myself at a concerning amount of times, wants to see the good in Josef regardless of his quirks. But as you’ll see, sometimes it’s just better to trust your gut.

I’ve got a thing for psychological horror films. I’m not saying that I don’t enjoy a classic stomach twisting slasher film — mindless, yet creative slayings are always a treat. But there’s something about watching a film and becoming so invested in the plot that you find yourself as paranoid and disoriented as the main character.

“The Invitation,” directed by Karyn Kusama, is a psychological thriller following Will (Logan Marshall-Green) and his girlfriend Kira (Emayatzy Corinealdi) and their unusual experience at Will’s ex-wife, Eden’s, (Tammy Blanchard) dinner party. A seemingly enjoyable night, joined by Will and Eden’s old friends and Eden’s mysterious new companions, begins to eat away at Will’s sense of reality when he senses something off about the party. Will and Eden divorced after a shared tragedy sending them both into a spiraling breakdown — yet the new Eden seems airy, claiming to be healed after a strange trip to Mexico. Will finds it strange that Eden is supposedly “pain-free” driving him to question her motives only to be met with rebuttal from the partygoers. Marshall-Green’s paranoiac performance also had me questioning his quick apprehension — what if he’s the mad one? Are his suspicions warranted? The amount of gas-lighting and forced comfortability was my anxiety’s worst nightmare.

“Overlord” is a World War II horror film composed of hair-raising ghouls, cryptic underground experiments conducted by Nazis and just the right amount of chaos. If historical accuracy is what you came for, I’ve got some bad news for you, buddy. However, if you’re interested in biologically enhanced zombies and the utter mayhem of war, welcome. Have a seat.

The film is set on the eve of D-Day, June 5, 1944, where we’re introduced to a group of American partially eager paratroopers preparing for a crucial mission — destroy the Nazi radio tower used for communication between Berlin and Normady beaches’ bunkers. After the annihilation of most of their troops, it’s up to Pvt. Boyce (Jovan Adepo), Cpl. Ford (Wyatt Russell) and the remaining soldiers to carry out the mission unbeknownst to a battalion of ruthless Nazis. This film blends two unlikely genres beautifully, never feeling like too much of one or the other. There’s a cheesy element when it comes to other World War II horror films that make a fictitious war depiction somehow less convincing. Of course, the events in “Overlord” are fabricated, but the amazing computer-generated imagery (CGI) and raw fear displayed by the soldiers immersed me into a story that felt — at the moment — real.

Ever wondered what you’d do if you found disturbing and incriminating photos in your fathers possession? But he seems like a normal guy — a devoted Boy Scouts leader, invested in his church and family. But if you’re a serial killer enthusiast like myself, you’d know that everything about your father’s polished facade is a bullet point in a “What to look for in a serial killer.” Before the infamous Ted Bundy and other falsely charming killers, when people thought of a person capable of murder, they pictured a blood-thirsty creep. But thanks to criminal profiling, we now know that killers aren’t always the man with five teeth carved to a point lurking in the shadows. They’re people — performing an act to conceal the horrors that lie beneath.

“The Clovehitch Killer” dives into the turmoil faced by Tyler (Charlie Plummer) who has suspicion to believe his father, Don (Dylan McDermott) is the untraceable Clovehitch Killer. Loosely based on the true story of Dennis Rader — also known as “BTK” for his signature of binding, torturing and killing his victims — Mcdermott’s eery, yet persuasive performance had me questioning his guilt alongside his son. The pragmatic tone in his voice reassures every doubt you might have had about the awkward father’s whereabouts. Then again, he is your dad after all. He couldn’t be capable of such a thing, right?

Two words: Character development. What? A zombie flick can have introspective characters without diminishing the excitement of a traditional horror film? Yes, my fellow fans of spookiness and gore, we can have our fake blood splattered cake and eat it too. “Train to Busan,” a South Korean horror film directed by Sang-ho Yeon, is a zombie-filled thrill ride that will leave you in tears — I won’t tell you if they’re happy or sad. Besides the suspense of escaping thousands of homicidal zombies, the progression of the main protagonists storylines and humility created a connection I’ve never had with a horror film. More impressively, the film’s side plots following different characters journey’s never felt out of place — each supporting character had a purpose.

The film follows detached father Seok-woo (Yoo Gong) and his daughter, Soo-an (Su-an Kim) as they journey to Busan. Seok-woo is a wealthy businessman constantly consumed by his work. He often makes desultory attempts to please his daughter only to be snubbed — he bought her a brand new Wii, not knowing she already had one. To make up for his superficial affection through gifts, he agrees to take Soo-an to see her mother — his ex-wife — who lives in Busan. Unbeknownst to the two, a rapid epidemic is infecting people across the country resulting in flesh-yearning zombies.

Did I purposely choose this movie because we’re in the middle of a pandemic and I want to prepare my peers for a potential zombie invasion? Maybe. But regardless, this film is wonderfully shot with solid acting. One performance that especially stood out was Kim, which surprised me. I’ve never felt so much emotional depth within a child in any other horror film I’ve watched. I’ve often found children in horror films quite cringe-worthy, which is upsetting because they’re spooky and adorable. But Kim’s gripping performance and charm alone truly enhance the emotional aspect of the film. So if you’re not into the blood-lusting zombies of “Train to Busan,” at least stay for Kim’s cuteness.