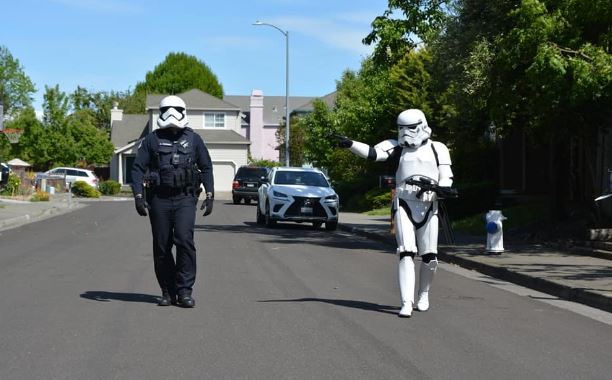 “It was one of the first movies I remember watching where I was completely enthralled,” Thomas Orlando, amateur “Star Wars” costumer, said. “I didn’t wanna take my eyes off the screen.”

“Star Wars,” the 1977 American epic space opera, now a multiformat, media franchise, garnered one of the most dedicated and loyal fanbases. May the 4th, (a pun of the series’ famed refrain “May the Force be with you”) dubbed “‘Star Wars’ day,” was a fandom conceived holiday that gradually gained momentum and first enjoyed large scale celebration on May 4, 2011, at Toronto Underground Cinema, Orlando said.

The day is typically host to movie showings, lightsaber duel events and detailed cosplay of the film’s characters.

Disney’s purchase of the franchise from series creator George Lucas in 2012, helped stoke the flames of this grassroots fan holiday into a “dark side version of Black Friday”, according to a financial report by the Verge.

But due to the outbreak of COVID-19 and shelter-in-place orders most large scale May 4th get-togethers have been canceled or postponed. As a result, “Star Wars” fans have taken to other alternatives.

The Bay Area’s division of the 501st, a Star Wars professional costume group which The Golden Gate Garrison is part of,  is also known as “Vader’s Fist..Golden Gate Garrison is the Bay Area’s division of the 501st, a professional costume group.  “Costumer” being the preferred term rather than “cosplayer,” said Public Relations Officer Jason Goldman-Hall, “people will think we’re a-holes for saying that. But we’re costuming.” As the standards for movie accurate costumes and armor is slightly higher than that of regular cosplay, where creativity is the main focus rather than accuracy, said Goldman-Hall.

“The big goal and mandate of the 501st Legion is to do public events and charity events to sort of support the community and bring “Star Wars” elements or “Star Wars” flair to events,” Goldman-Hall said. “Because we’re here in the Bay Area we ended up doing a lot of events that are a little larger in scale because Lucasfilm is here.”

The Golden Gate Garrison’s busiest week is the week leading up to May the 4th Goldman-Hall said.

“Last year we had multiple events all over our territory [greater Bay Area and Northern California],” Goldman-Hall said. “We had, you know, people doing two and three events a day. And we were spread pretty solidly across the entire San Francisco Bay Area, Northern California area … at sporting events and comic book shops and libraries. And basically everyone who wanted to bring people out was having a “Star Wars” night.”

Many events have been canceled or postponed indefinitely, said Goldman-Hall, due to COVID-19 concerns. Goldman-Hall said that the group has been making good use of this abundant free time. One of those things being “virtual troops.”

“For our virtual troop, we set parameters for members, including staying fully in costume in their approved costume, demonstrating responsible behavior, avoiding the waste or perceived waste of items such as masks or gloves,” Goldman-Hall said. “Our feeling was that just as we try to model proper “in-universe” behavior during normal situations, COVID-19 troops meant we needed to maintain professional, responsible behaviors.”

These virtual troops have resulted in photo submissions that have featured 501st members wearing everything from the classic Stormtrooper armor to Kylo Ren sewing masks at home.

“We did things like that to sort of show you know how we as a community should be acting right, we should be cooperating, we should be helping, we should be modeling good behavior,” Goldman-Hall said. Along with Craig Gaylord, Goldman-Hall thought it was a good use of  their weird passion to give others something to smile about and take their minds off of wearing a mask during this shelter-in-place.

The group has also taken to making masks and face shields for the community, said Goldman-Hall, utilizing their costume making tools, such as 3D-printers.

“[501st Commanding Officer Gynnie Lindquis] put out a challenge that by April 30th she wanted to see if we could make 500 masks or face shields,” Goldman-Hall said. “It was like ‘hey, you’ve got this time you’ve got this dedication you’ve got your printers and your sewing machines’ … And as of now, the garrison numbers and other members of local clubs have made 886 fabric face masks and 636 3D-printed face shields, which  was pretty crazy.”

The 501st’s international status also expedited the shipment and distribution of those products to different parts of the country. Allowing masks to be sent, said Goldman-Hall, “to other garrisons in other parts of the country to then distribute to first responders and groups in their areas.”

“Hardcore cosplay is great”, Orlando, whose costuming remains more simple, said. “The people that do it right deserve all the praise.”

With shelter-in-place extended to May 31 it remains unlikely that the Golden Gate Garrison will be allowed to gather in costumed mass for some time but Goldman-Hall remains hopeful.

“All of the sort of peripheral things you do to be a costumer, the making of fabric costumes, the printing of armor, or the networking with people around the country. All of those things are sort of being repurposed into at one another and helping one another,” Goldman-Hall said.  “I think there’s an aspect of saying ‘hey, you know what, use this love of costuming to support your community.’ And then we can all get back to dressing up like space people sooner.”