The devil you don’t know 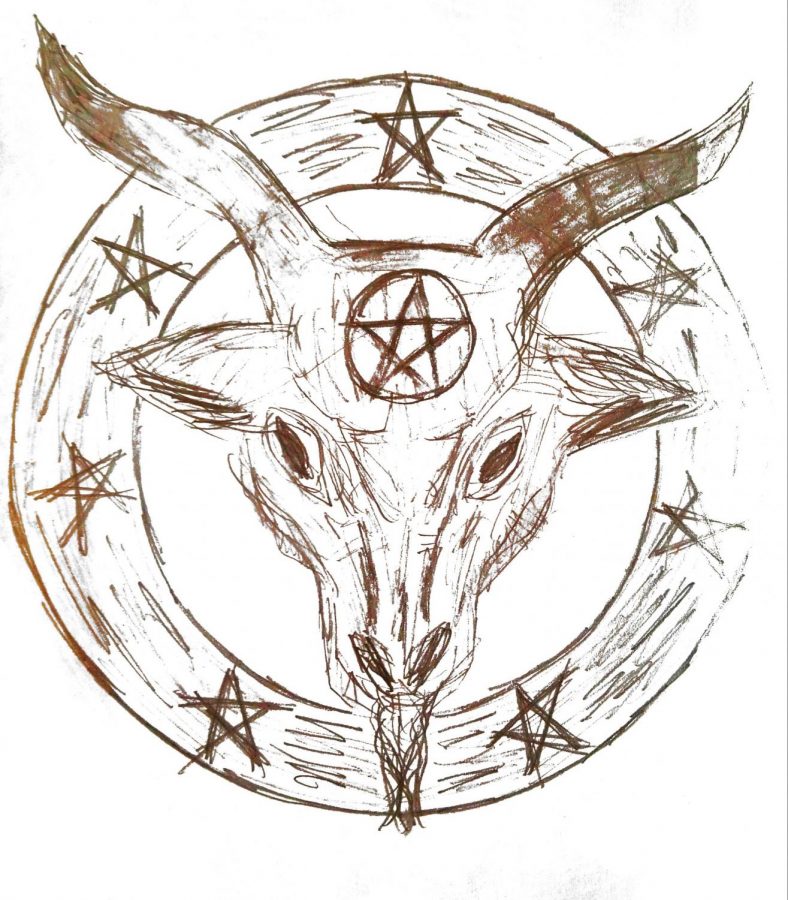 Story by Ryce Stoughtenborough and Illustration by Patrick Tamayo

He’s been tied to hundreds of heinous crimes throughout history, often pinned as the alleged influencer. Hollywood has profited heavily off his presence in films like “The Witch,” “Rosemary’s Baby” and William Friedkin’s 1973 horror classic “The Exorcist.” He goes by different names to some — Baphomet, Beelzebub, Lucifer or Satan — often depicted as a crimson-colored creature with horns atop his head.

Yet, to practicing Atheistic Satanists and members of The Satanic Temple, Simone Lasher and Daniel Walker, who’ve chosen to use pseudonyms due to personal safety, Satan isn’t real; nor do they worship him. In fact, according to The Satanic Temple, the name Satan means embracing “rational inquiry removed from supernaturalism and archaic tradition-based superstitions.”

“The analogy that I like to make these days [is that] religion is supposed to give you certain things — it gives you guidance, values, structure, personal fulfillment [and] common ground with other people and a sense of your place in the world,” Walker said.

He said that in almost all cases, religions get their values from a common foundation of myths created through storytelling.

“[Whether it’s] from the Gospel or the Vedas, or the short fiction of L. Ron Hubbard,” Walker said, receiving a giggle from Lasher. “For us it’s no different, our myth is the myth of Satan as it exists in art, literature and pop culture. …The only difference with us is we say, ‘We know our myths are myths.’ Nobody believes these things literally, but they hold the same place in our lives like other people’s religious mythology does and they’re just as important to us.”

The man? The myth? The legend?

“He’s an archetype, he’s a metaphor [and] he’s an aesthetic,” Lasher said, referring to the horned monster in red.

Walker explained how The Seven Tenets of The Satanic Temple, a list of beliefs upheld by the religious group, are a great way to interpret the myth of Satan. He said the ideas the tenets promote — compassion, empathy, reason and human fallibility to name a few — are what The Satanic Temples idea of Satanism all about.

“There are also other ideas too, like this idea of Satan as a revolutionary. The first person to say, ‘This isn’t good, it should change,’” Walker said. “And then the cultural assumptions built into that were a divine, all-powerful being [was] supposedly the source of all good, and this revolutionary was the source of all evil. I’m very, very suspicious about the motives of whoever put that story together originally. I’m just going to put that out there.”

That story, often based on the book of Isaiah in the Christian Bible, has been told for centuries, taking on many different interpretations depending on the religion. In Buddhism, Satan is known as Mara, a demon that tempted Buddha away from his path of enlightenment. Similar to Christianity’s belief of Jesus, who resisted Satan, Buddha also resisted temptation, defeating the demon.

Though this demon may represent the root of all evil to some, to Atheistic Satanists, Satanism has become a place of refuge for people who’ve felt outcast from mainstream society.

“We have the Christian majority in this country, so if you go against those teachings and you get ostracized — this could include … queer people, femininsits, people who have abortions,” said Lasher. “It could be because you like heavy metal and Dungeons and Dragons. So, all these people [who are ostracized] get told, ‘Well, you’re of the Devil. You’re a Satanist,’ but we’re just saying, ‘Yeah, OK. We’ll take it.’”

Although Satanism has gradually become a modern day religion publicly practiced by thousands, despite the havoc caused by the infamous “Satanic Panic” from the 1960s through the late 80s. Megan Goodwin, a lecturer in religion at Northeastern University, explained how a fabricated “Michelle Remembers” ignited a nationwide hysteria of Satanic abuse in the childcare system.

According to Goodwin’s website, “Michelle Remembers” — a book, now proven to have been fabricated, consists of one woman’s recovered memories of Satanic abuse. The authors of this book promoted it across North America, leading seminars with law enforcement, mental health providers, as well as social workers on how to look out for Satanic abuse.

Joseph Laycock Ph.D., an assistant professor of religious studies at Texas State University mentioned the McMartin Preschool Trial, one of the longest and most expensive trials in American history, costing the government $13.5 million.

In 1983, a woman called the Manhattan Beach Police to accuse Ray Buckey, the son of the preschool’s owner, of molesting her 2-year-old son during a Satanic ritual.

“People said that this family … who ran a daycare center were secretly Satanists and were abusing children in secret dungeons hidden under the daycare center,” Laycock said. “And of course none of this was true. If you ask a [child] over and over and over again about Satanism, they will tell you a story like this.”

Satanism isn’t as primordial as Christianity or other mainstream religions. In fact, it wasn’t a real organized religion until the formation of the Church of Satan in 1966 by founder and writer, Anton LaVey.

LaVey, who originally established the church in a black, Victorian home in the Richmond District of San Francisco, is also the creator of LaVeyan Satanism — an individualist social darwinist philosophy.

“Anton LaVey didn’t mind being a black sheep, he wanted to kind of spook people a bit,” Laycock said.

“If you ask them, they would say we are not Satanists,” Walker said.

But, as with many religions, Satanism has branched out into different sects from The Church of Satan —The Temple of Set in 1975, the First Satanic Church in 1999 and The Satanic Temple in 2013 — whether from different interests, more beliefs or new ideas.

Lasher and Walker are also members of Satanic Bay Area — an independent local chapter separate from The Satanic Temple. They explained how their Bay Area chapter is specifically a leftwing political group.

“There are so many kinds of Satanism, and [The Satanic Temple] is just one,” Lasher said. “And we are much more inclusive … just a bunch of people with similar interests, not necessarily similar beliefs, coming together to discuss and bond with each other.”

Lasher explained how regardless of their differing views from other religions, they’re still members of American society.

“We’re just normal folks who have opposite ideas about the book we like to read,” Lasher said.