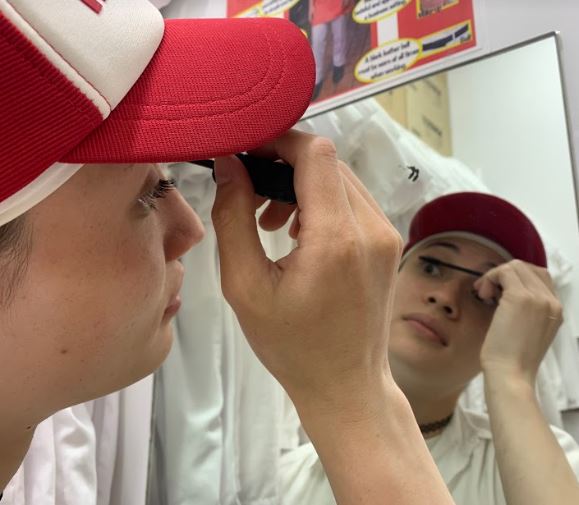 Different makeup products have been designated specifically for women over the last few decades. Makeup advertisements from brands like Maybelline and Olay often feature actresses or models who promote a more youthful appearance.

Makeup can be a sign of power or empowerment. For some, it is a tool used to showcase their authentic selves by being able to alter their appearance to see fit.

For Jesse Hollingsworth, a 21-year-old student, makeup has helped self navigate her male-to-female transition. Prior to coming out to herself in October 2018, Hollingsworth thought makeup was an interesting idea, but always felt constricted not to experiment because at the time she was a male and society made her feel as if she wasn’t able to.

“It was just scary because when I wanted to fit in I had to deal with the guilt I felt for thinking should I not be into this? Should I be finding makeup interesting?” Hollingsworth said.

Hollingsworth remembers feeling trapped all throughout her childhood, she recalls immediately shaving her legs right when she hit puberty as a male at the time. She knew she had all these feelings about femininity, but did not understand what those feelings meant.

“I just thought they were weird feelings, if I don’t think about it, they’ll go away. But it never did,” she said.

Makeup often creates a clear gender division early in life that is typically more female oriented. Hollingsworth, who as a child watched her mom apply makeup, was later influenced by the makeup looks posted on social media platforms.

Painted lips, winged eyeliner and a touch of blush are small ways many women change up their look — whether it’s to dress up, look professional or used as motivation to be productive. Hollingsworth’s earliest memory with wanting to look more feminine was at age three, when at the time, he would watch his mother get ready for work.

After coming out in 2018, Hollingsworth told her closest friend — who worked at Sephora — months later. Her friend was able to help her navigate the new world of makeup and the steps of application.

“When I put on makeup at that time and didn’t think about the world and how things were supposed to be. I thought it was so cool that it could make my skin look smoother and make me feel better,” Hollingsworth said.

Months after coming out and after feeling trapped for what felt like a lifetime, Hollingsworth accepted that she was allowed to wear makeup. She had finally let herself loose and allowed makeup exploration to begin.

Over the years there has been a lot more public acceptance of the trangender community. Many news and magazine outlets like BuzzFeed and Marie Claire have published articles on makeup tips for trans women. These articles walk readers through the step-by-step application process of applying makeup, which is especially helpful for people who are just stepping into the makeup world.

Hollingsworth spent a lot of time doing makeup looks early in her transition. Her friends and the internet assisted in the process of learning.

“I kept practicing it. I still need a lot more practice but it overall helped me look in the mirror, see myself in a more feminine way and accept myself further,” Hollingsworth said.

Before her transition Hollingsworth knew she liked being feminine but only saw the backlash against the transgender community at the time. She did not like describing herself as a “cross-dresser” because to her it was deeper than that, dressing up and applying makeup as a female wasn’t a costume for her but an identity.

Through the application of makeup she is able to feel more herself and “get the point across to others” as she likes to say. When she first publicly came out she would wear makeup on a daily basis to convey to others that this is who she is and that she likes looking pretty.

“Makeup is so powerful that it gives everyone that chooses to wear it an extra power boost. It doesn’t matter what gender you are if you want to wear makeup because it makes you feel the best, you should,” said San Francisco State senior and makeup enthusiast Shannon Hanley.

When it comes to makeup, social media has expanded beyond a female audience. Men and many people in the transgender community use their social feeds as a platform to show that makeup is not gender based.

Just this year, beauty influencer Nikkie de Jager — whose YouTube channel NikkieTutorials has over 13 million subscribers — came out as being transgender after nearly more than a decade on YouTube, giving many viewers going through the same thing a voice.

Many male makeup artists, like James Charles, Bretman Rock and PatrickStarrr, are on the continuous rise each with millions of subscribers to their YouTube channels.

For Hollingsworth,t seeing men and transgender people have a voice in the makeup community is refreshing and something she wished she saw more growing up. It’s also comforting to her knowing that there are other cultures, like in Korea, where men are accustomed to wearing makeup as well.

Women like Hollingsworth want to emphasize that there’s always more behind makeup than just a pretty face — it’s about identity.

“What I want people to see me as and treat me as is a girl. I want them to see that perspective and that soft side of me and with makeup, people finally get to see what I want them to,” Hollingsworth said.

Though Hollingsworth doesn’t feel like her makeup skills are where she wants them to be just yet, when she gets done putting on her makeup she finally sees the girl she’s dreamt about all her life and gives her the confidence to be her true self.