A journey to the walls of the de Young open 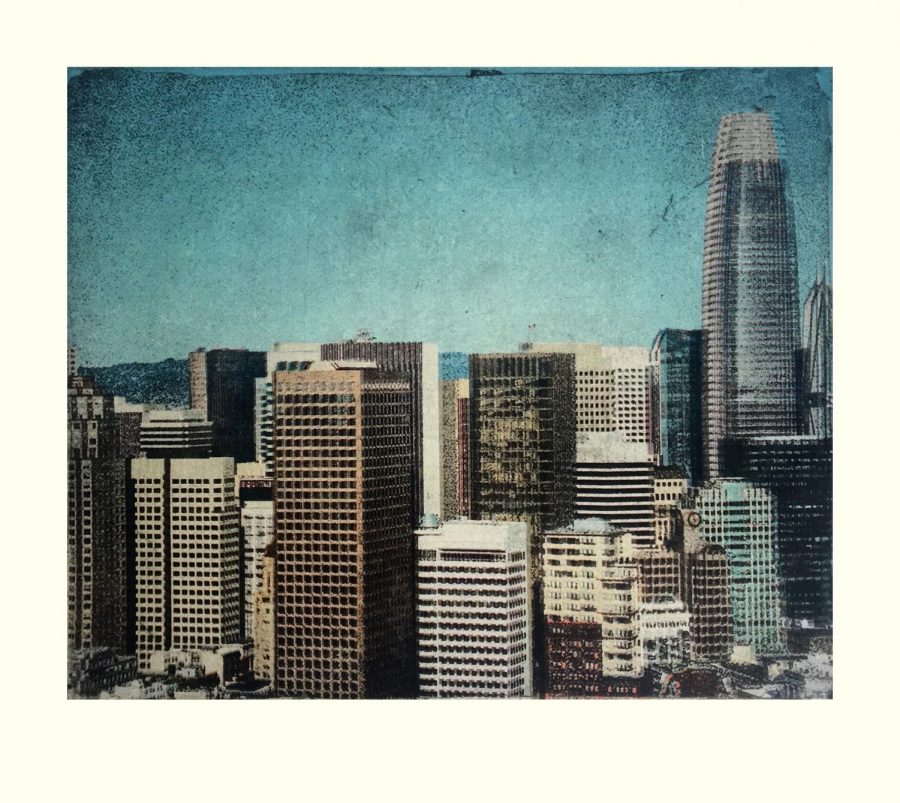 Artwork by Jocelyn Lee titled, "Earthquake! (Be Still My Heart)"

Imagine playing monopoly and instead of landing on Boardwalk, the top hat lands on the most expensive San Francisco neighborhood — South of Market.  In this 406-acre district, the median income is nearly $200,000. The amount of money that a player would need to rent a 1-bedroom apartment is $72.12 per hour.

San Francisco artists who create work inspired by their home city say sweeping affluent neighborhoods, such as SOMA,  are a driving force for inspiration in their work. Having that work showcased in one of the nations most visited museums  means even more.  Two local artists, Jocelyn Lee and Morgan Corbitt, landed  an opportunity to do just that.

The de Young Museum in San Francisco’s Golden Gate Park held an open call for artists from all  nine Bay Area counties. Seven hundred and sixty two artists from these counties presently have their art showcased through Jan. 3, 2021. The open exhibit is “a museum tradition that engages the local community through showcasing the art of their community members,” according to the de Young Open website.

Lee was born and raised in San Francisco, and recently graduated from UC Santa Cruz with a double major in cognitive science and studio art. After reading an article one day that outlined the prices of homes in each city zip code, she turned to her art.  With her piece titled “Playground For The Rich,” Lee creates a space for the public to explore the issues of housing and income through a game of Monopoly. Her piece shows the viewer what it costs to afford a one bedroom in each San Francisco district.

Lee recounts the moment that sparked her inspiration while reading the article about housing costs in the city.

“It was really staggering just to see all of these numbers,” Lee said. “I tried to arrange them from the poorest to the richest district. Even in places like the Tenderloin, you have to make $50 an hour to afford a one bedroom apartment. It’s really insane.”

Lee credits her UC Santa Cruz education for helping her land a spot in the de Young Open. As a student she learned silk screening and lithography, which prepared her to create “Playground For The Rich.” She makes art that is not made pretty for the sake of beauty, but to absorb what she has learned. She takes those feelings and brings them out into the real world through her work.

“If I’m going to put something in front of someone and say ‘look at this,’ I want to have a real intent and purpose when showing it to people,” Lee said.

Morgan Corbitt, a recent SF State studio art graduate, also sees San Francisco as her muse. Most of the work she produces incorporates photography, painting and collaging. Corbitt’s piece in the de Young Open exhibit, “Pork With Juices,” is a collage that features items and experiences she has had while living in the city. She paints about things that have left her with uncomfortable feelings.

“During that time I was also having these dreams where I was just grinding my teeth. My teeth were falling out, and I had this model of teeth from a dentist’s office and I was looking at that sitting on my desk while I was looking through my photos and thinking about a can of pork with juices,” Corbitt said. “I decided to make this painting based on things that make me feel a little on edge and uncomfortable.”

The de Young Open call was a way to celebrate the museum’s 125th anniversary. Artists, such as Lee and Corbitt were chosen because they enrich the cultural landscape of the Bay Area, according to curator Timothy Anglin Burgard. Out of the 6,188 artists from across the Bay Area who submitted work, 762 were chosen.

Burgard said in a walkthrough video of the exhibit that all of the art pieces were installed nearly edge to edge in a 19th century salon style, which “allowed us to show the absolute maximum number of artworks.”

The themes are apparent when walking through the exhibit. The front room of the gallery is dedicated to political and social justice issues of the moment. They feature images that visualize the political landscape utilizing paint, photography, origami and quilting.

The exhibit is not only a showcase for artists, but an income opportunity as well. The artists have the opportunity to place their artwork for sale. One hundred percent of the profits goes to the artist. Lee is undecided about selling “Playground For The Rich,” it’s listed for $888 — a lucky number in her culture.

“I haven’t decided if I even want to sell my piece because it cost almost $400 to frame, and it was such a process. I don’t know if I want to go through that again,” Lee said via text message.

Corbitt listed “Pork With Juices” for $1,000.  This would be the first piece that she’s ever sold. She says that it is strange to put this piece of work on sale because it was her first time pricing one of her pieces. To help with deciding the price she reached out to a former SF State professor, who was familiar with her work. She hasn’t gotten any offers on her work yet, but the idea of her work living in someone’s home makes her happy.

“I think it would be amazing if this piece lived in a person’s home forever!” Corbitt said via text. “I just hope if it sells, the owner is someone who really appreciates art, and takes good care of it.”

Corbitt didn’t take art seriously until she came to San Francisco. Luckily she was able to find her inspiration. The pandemic left her in a precarious position when it hit. She felt restricted. Once everything closed, it was like her creative process took a turn. Usually, she is able to capture what she sees, but if everything that she sees is the confines of her home, it becomes challenging.

“I think that’s a big part of my art that I didn’t really realize,” Corbitt said. “Now that I’ve been at home much more, and not seeing friends, I definitely feel like my creative process has come to a halt.”

This moment in Corbitt’s life has not been entirely bad. She counts her spot in the de Young Open a blessing.

“This whole process has been such a great learning experience for me. It was really interesting to see the exhibit in person, and look at all the art that was accepted,” Corbitt said.

Lee said that studio art was something that she found her way into during her second year at UC Santa Cruz. Most of the art she produces comes from the viewpoint of what it’s like being from a city such as San Francisco.

“It always goes back to San Francisco, because that is what I love and what I want to share with people,” Lee said. “It’s always a rapidly changing city, and I just want to hold on to a piece of that. I want to preserve some of it before it’s all lost, gentrified or unrecognizable.”